I’ve been catching up on films lately, Cloud Atlas, Looper, Intouchables, and also watched some old favourites like Papillon and Magnolia. The first two films happened to be a sci-fi time travel story, with which I have a comprehension issue, and I blame on my lack of imagination. Cloud Atlas was ok, but it seemed to have reminiscences of past films like Blade Runner, Inception and Crash. Is it just me who felt that way? So I was bothered by the thoughts that kept making comparisons with other films and didn’t get to enjoy the film, a bad sign huh? The film failed to grab me.

Then came Looper, which we managed to watch in three days. I just couldn’t believe such film got a high score on Rotten Tomatoes and from now on, I don’t think I can trust those guys any more. Luckily, Intouchables made up for my disappointment with the two previous films and we watched it while eating “recycle pizza”, which made the night unforgettable. 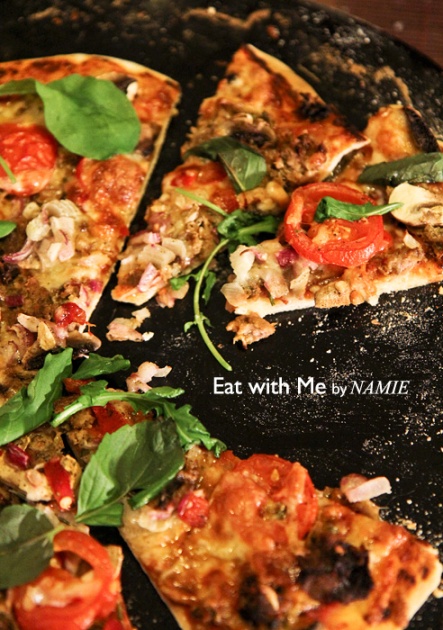 I named it a recycle pizza because the pizza idea was very spontaneous and happened to be a wonderful way to finish off the last remaining meatloaf from the last dinner party.The dilemma is that when you love to cook everyday but only have one or two mouths to feed, you have to deal with a lot of leftovers and be cost effective. One night, with the party meatloaf, instead of reheating and eating the same thing again, I crumbled it and made Bolognese sauce for pasta and it tasted much better than the one I made with beef mince the week before. Strange!

I detected that Mr.O was a bit nostalgic about his old time of order-in pizza with a movie, but I wasn’t going to submit to delivery pizza, so I quickly whipped up a dough for three pizzas. The dough is the most important when it comes to good pizza. 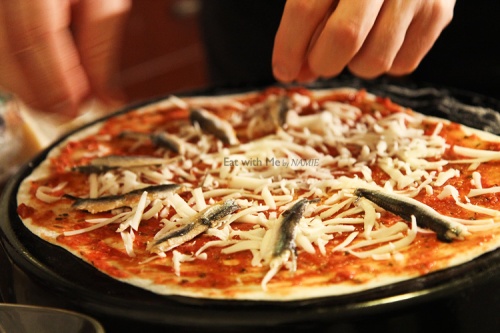 Flour, water, yeast, olive oil and sea salt…mix and knead, and wait……so easy, and when you have a man to do the kneading for you, it’s even better.

While the dough was fermenting, I got started on the preparation for the second most important thing for good pizza, the tomato sauce, garlicky tomato sauce indeed. Please don’t just spread tomato paste even if you feel lazy. The simplest way to make the sauce is
to blend fresh tomatoes and garlic in a food processor and simmer in olive oil and red wine, only if you have it, until it’s smooth and thick. I add red wine and a little onion as they give natural sweetness to the sauce. I was lucky to have plum tomatoes that night as plum tomatoes make good red sauce with intense flavour. But the trick you can do when you don’t have them around is to use normal tomatoes and add a teaspoon of tomato paste. 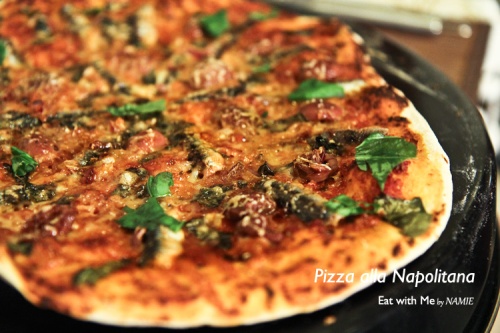 So here goes the simple formula for my secret sauce is 300g fresh tomatoes, 2 garlic cloves, 1 Tbsp of red wine, 1 tsp of dried oregano and basil, and sea salt. Of course, fresh basil is better if you want the real deal, and canned tomatoes are acceptable in some situations.

While the sauce was cooling, I quickly checked inside the fridge for pizza toppings. Well, not much except for an ample amount of cheese and a big slice of meatloaf, which seemed to be destined to the top of one of the three doughs. And for the other two? Hmm…I pulled out every possible ingredients and did mental puzzles to make up appropriate combinations.

One for anchovies and olives, one for meat crumbles, char-grilled capsicum and mushrooms, one for mushrooms and lots of cheese. Sounded ok. So we got started by opening a bottle of Hill&Dale Pinotage to breathe and putting on jazzy music. I took a sip first to remember the taste from the last time I drank it. It seemed to be softer and fruitier than I remembered, which worked out well in terms of food pairing; soft tannin, fruity and smokey undernote. Lively wine for lively pizza!

Wow, not only did the pizzas taste good, but the whole process of making them was a huge part of pleasure; rolling the dough, decorating the dough, and smelling as the pizza is cooking with anticipation, and when it finally comes out of the oven, quickly cut and grab a hot slice and sniff it before taking a bite of pleasure. The last time I had this much fun with making pizza was on the new year’s eve going on 2011. We had a Tall half-Italian and half-British man making pizza for us girls then. Wow, it’s been already two years.

Well, now that Mr.O has got the taste of real home-made Italian pizza, he will no longer look back on his pizza ordering time and instead, he will be rolling the dough and making pizza at home. He’s already excited about the next pizza making session and has started watching youtube videos for spinning pizza dough. I wonder if he will succeed….