Ok, so I mentioned about detoxing and getting back to normal routines and eating in the previous post, right? I’m not really talking about the detox diet that women so often religiously talk about; I simply mean going off alcohol for a while, at least until this Friday because on Saturday I will be tasting some wines with my foodie friends.

Before Nice, Mr.O and I tried to eat up everything that might go spoilt, but we couldn’t finish the cooked beetroots. I was meant to char-grill a bunch of capsicums to store but didn’t get around to do it. So it was the time. I love char-grilling them over the stove, though some people prefer the oven because of the mess it makes.

But this pan, which I accidentally found while looking for a heat diffuser for Persian rice, happened to be what Turkish people use. You can char-grill any veggies, even seafood!

So at lunchtime, even though I was not fully in the mood for cooking and taking photos, I couldn’t resist it when I saw a half block of halloumi left in the fridge. Halloumi and capsicums, well, that seems to call for something that we all know. Halloumi with roasted vegetables.

While I was out getting some veggies to go with the halloumi, I thought I would go beyond the typical combo of roasted veggies and halloumi. Why is halloumi always served with roasted eggplant and zucchini? Then, Mr.O called and asked me what food was good for iron. Well, spinach springs to your mind, doesn’t it? Yes, but iron is hard to be absorbed by the body and we don’t need it that much, therefore it is no use eating spinach, liver, egg yolk and dried fruits, etc. every day. So I told him.

Unlike many others, I love spinach. Whether it’s raw or cooked. I enjoy the sweet taste of lightly blanched spinach. I’m not talking about baby spinach here. Some spinach, specially the type that you only get in winter in Korea, is sweet and flavoursome on its own – one of the few green leaf vegetables enduring the harsh cold and concentrating nutrients – therefore, only minimum seasoning with salt and a drop of sesame oil is needed and garlic or strong spices are strictly forbidden for you to enjoy the fresh and natural taste. Let’s cut the nutrition talk as sometimes talking about nutrition kills appetite and the fun of eating and cooking.

What is your favourite spinach dish? Spinach filo pastry, spinach lasagna, spinach curry, creamed spinach? Mine is Catalan style spinach salad. When I first had it in a Spanish tapas restaurant, I thought it very refreshing considering conventional spinach dishes, so I’ve been making it ever since then and people seem to like it. I’ve never checked the original recipe so I only make it from my memory and it seems similar and tasty. But if you’re curious, you can look up the original recipe or just follow mine.

So I’m going to combine my favourite spinach salad with char-grilled capsicum strips and, on top of that, add a touch of middle eastern flavour. Sounds very interesting, doesn’t it? For halloumi, you’ve got to char-grill capsicums for the smokey flavour and enhanced sweet flavour to contrast the hard texture and salty flavour of halloumi. Though it might sound daunting, char-grilling only takes 5 -10 mins and it’s definitely worth the extra effort. I drizzled lemon and herb infused olive oil and sprinkled a tiny bit of turmeric on the cheese for colour. I guess you can marinate the cheese before grilling.

To tell you the results, I was VERY surprised by my creation. 10/10 *well-done pats on my back* Here is my Beetroot Hummus and an ensemble of Spinach and Halloumi Stack.

I could have sliced the beetroot and layered them with the other veggies and cheese, but I thought I’d do it in the French style. Puree! They love the method, don’t they?
I used to make a beetroot dip with cream cheese and dill back in Australia, and here the Turkish way is of course with yogurt, but the version by Namie, a world cuisine advocate, has all; garlicky like aioli and nutty like the Middle Eastern hummus. To be honest, I had neither. So my trick was a tablespoon of tahini to thicken the puree while smoothing out beetroot flavour as well as adding nuttiness to it. Voila, it worked way better than I’d expected so I was very happy. 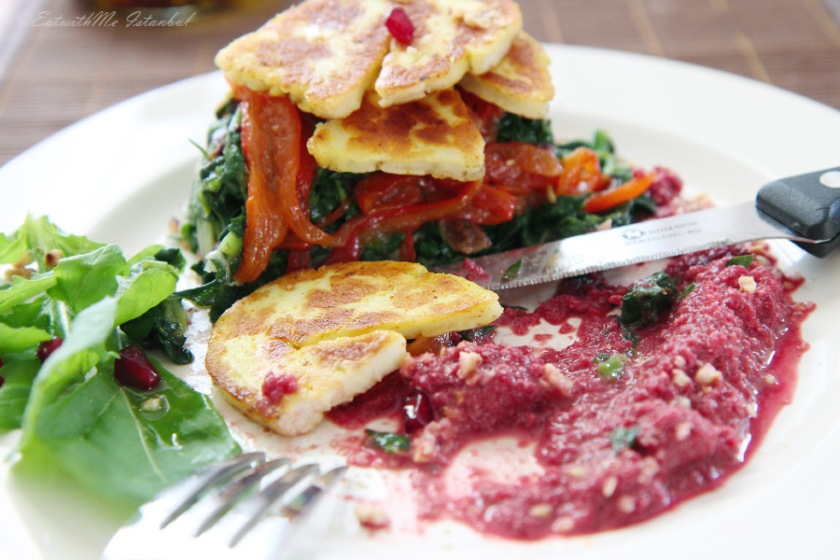 The nice mélange of sweet, nutty and cheesy flavours brought my food memory back to Spain, more precisely, to a Catalan restaurant where I had the most delightful gastronomic affair. Catalan cuisine, the rich and sumptuous cuisine that has evolved for centuries with influences from neighbouring countries, precedent empires and colonial trading, tends to harmonise different flavours into a dish: sweet and savoury;meat and fruit;rains and nuts, etc. And I find it very addictive. I still remember the baked apple stuffed with meat, dried fruit and nuts. I generally love Spanish food and the way they eat: late, little by little, for a long period of time 🙂

You can stack up any kinds of roasted vegetables such as pumpkin, eggplant, zucchini, carrot and mushroom. For me, I feel that this new combination will be my favourite for a long time.The flavours were so interestingly scrumptious and I couldn’t stop moaning, and then Mr.O started doing the same. I can easily polish off the beetroot humus dip on its own with nice nutty German rye bread, pumpernickel, and I did! Gosh, it was jolly good and I loved it. Be warned that it’s really garlicky, almost like aioli in pink clothes.

After mopping up the plate squeaky clean, I began to think I might be lacking in emotional needs because I’d been eating so much lately. When one’s brain works hard, one might crave carbs, and that may be it. Anyway, I’m thinking of making the dip again for the dinner this Saturday, maybe….to see if others would like it as much as I did.

Of course, you need halloumi and char-grilled capsicum to start. Personally, I like the one made with goat and sheep milk. Slice the cheese and marinade in lemon and chili olive oil, sprinkled with turmeric.
And prepare the spinach salad and beetroot puree.
Once everything is ready to go, cook the cheese and stack all up nicely, and then sprinkle hazelnuts all over the plate.

1. Toast (garlic), nuts and raisins in a frypan with a little olive oil.
2. Chop spinach and spring onions finely, add to the pan, turn off the heat and mix.
3. Season with salt, nutmeg and a little pepper if you desire, and set aside for assembly, or serve separately on its own as a tapas.

1. Process beetroot and garlic, tahini in a blender
2. Once it’s become paste, add olive oil and mustard and whiz until it becomes thick and smooth.
3. Season with salt and lemon.
4. Serve it immediately or refrigerate it to serve it cold.
5. Assemble the spinach and char-grilled capsicum on the bed of hummus and sprinkle nuts over the entire dish.

NB: For my halloumi dish, I warmed it in a sauce pan for a minute or two with a teaspoon of balsamic vinegar. For different variations, you can add some chickpeas or beans or cream cheese or feta cheese to bulk up as well as to smooth out beetroot taste.