I am sorry for the delayed reviews of the “open doors” tasting in Médoc I did last Saturday and Sunday. Being swamped with the photos to edit and notes I took of the wines I tasted, I begin to realise how convenient it would be to have a smart phone to upload instantly. Especially, last night when I talked about châteaux I visited, I had difficulty matching the  chateaux and their wines.

So I’m forcing myself to write the reviews on a Easter Sunday when I’m supposed to be off work!

My mentor and I visited 16 châteaux in two days. We started from the far end, St-Estephe, Pauillac, St-Julien, Haut-Médoc on the first day and covered Haut-Médoc again and Margaux on the second day. To list the names of the châteaux and the wines from Day 1,

One or two might be missing in the list probably because it wasn’t good, therefore I forgot to write down. Even though we tried to visit as many places as we could, it didn’t work out as planned on the first day as not many chateaux in the prime area opened their doors. However, it was still nice to check out the vineyards, comparing the soil and vines and inhaling the euphoric smell of oak barrels in the Chai (Barrel room).

Between the visits to a chateau, I also stopped at La Medocaine and other wine shops for more tasting. My mentor, being a traditional French, took this trip as an opportunity to stock up best value wines for his cellar. There I tasted wines from Pessac-Leognan, Graves and St-Emilion, and my mentor, being sensitive to sulfites, always look out for vintages before 2003 and bought 3 bottles Château Guillotin 2004, St-Emilion.

Its fragrant and fruity notes were very noticeable after tasting mainly Medoc wines and it was be a perfect bottle to enjoy now but  the structure was powerful enough to wait for another 2-3 years easily.

Most of the wines I tasted that day exhibited typical Medoc style, which is prodominantly Cabernet Sauvignon with a seasoning of Merlot and a little Cabernet Franc. The wines worth taking note of are Lynch Bages and Lilian Ladouys.

At most chateaux, we were able to just taste wines and leave, but Château Lynch Bages didn’t let you off the hook so easily, making you go through the whole tour of their chateau, which took good 30 mins, and people were getting impatient as we got closer to the tasting room. The man in charge also knew that we are getting thirsty, which was the absolute purpose of the long tour and explanations. They had very high quality barrels for sure.

Well, I don’t really approve of that kind of psychological game, however, after tasting the wine, I couldn’t hold the grudge against it and I took my hat off to the magical masterpiece of the wine. Château Lynch Bages 2006, the deep seductive purple colour was just a tip of iceberg to the surprise and pleasure I had.

The aromas of black fruit, chocolate, bouquet and mint were so palpable, making my mouth water, and then the liquid pleased all parts of my palate and went down, leaving a buttery taste on the tip of my tongue before revisiting with a delicious taste of vanilla prune tart from the back of the throat. This was a perfect opera of Cabernet Sauvignon, Merlot, Cabernet Franc and Petit Verdot in their best character. 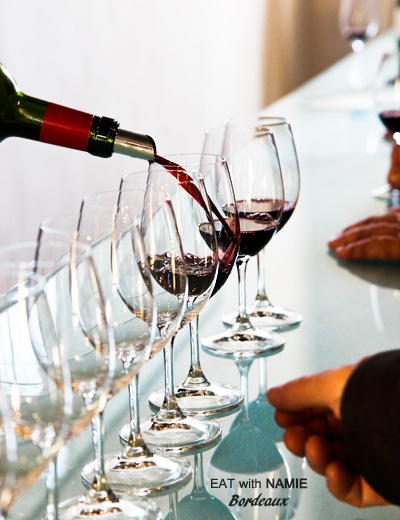 I had no idea until I left the chateau how much the bottle was( €150), in other words, I wish I had drunk another glass for a full pleasure! That was a darn good, elegant wine that I could have wished to keep for my 40th birthday in 6-10 years – don’t try to guess my age 🙂

I feel grateful to them for having opened the bottles for the public in a way and the staff were very pleasant and professional, which also made a huge difference in how people perceived the wine. At some places, clumsy, unprofessional and unfriendly staff made the tasting not very enjoyable, therefore the wines.

Some places had some bread and cheese and some didn’t. Our final stop Chateau Trintaudon offered a wide range of wines and there my mentor bought Chateaux Perganson 2010 for his cellar. In Trintaudon 2002, I detected flavours of butterscotch and cognac, which was something different in a pleasant way. Lilian Ladouys was also very good with rich, juicy red fruit flavours, char and smoke, and beautiful, velvety tannin, which would age wonderfully adding more elegance to it.

The shadow was growing and the day out in the Medoc ended by the Gironde estuary where the lighting is just beautiful and soothing. I covered more places on Day 2, which is far more interesting in terms of quality of wines and knowledge. As I always say, I will write about Day 2 very soon. I realised while writing this review how important it is to organise the tasting notes of the bottles I drink and I need to work on that side more in the future.