Some might think….”Isn’t it too late for raclette?” Oui, maybe…? I love cheese, but I must admit I am not a fan of raclette or fondue for the same reason that overdosing on cheese in one meal isn’t a good idea. Plus, when you do fondue or raclette, you need to eat fast to get the benefit of hot cheese, but I am a slow eater so….for me, it seems that it just kills the goodness of raw milk cheese. Having said that, it is the atmosphere surrounding the raclette table that matters, and I like the spirits of sharing and eating non-stop. It is, in a way, a BBQ, and in every culture, the ritual of gathering and eating together is at the core of life and humanity. 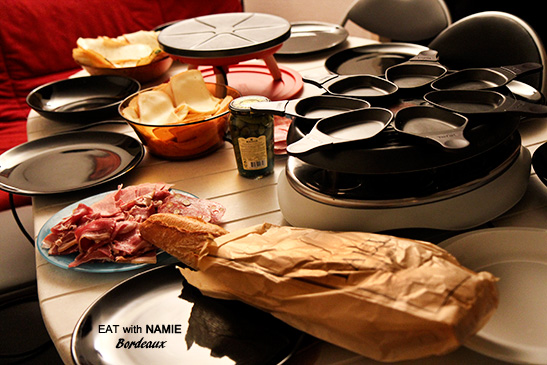 The raclette dinner was to celebrate the moving to a new flat and a birthday. The dinner was delayed as people enjoyed chatting, drinking apéritifs and nibbling, simply forgetting to prepare the mains, which is often the case in France; people love talking! I would say that the French paradox about the French food and health is not due to what they eat, but how they eat. It is simply a difference in lifestyle. The more I experience the French way of life, the more convinced I am about the fact that there is no paradox and if you eat a lot and don’t move, you get fat. Reversely, if you eat and move around, you stay slim, like the French. They eat while talking and eat slowly, and they might appear to indulge a lot but in truth they are always in control because that is how they are taught as a kid. 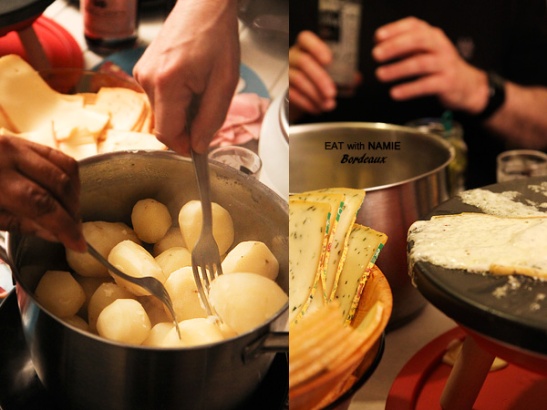 The evening was no exception. People indulged in cheese, lots of cheese and wine. There was no shortage of wine. It kept coming in dubious bottles with no labels. I’d had raclette in Switzerland before so it was interesting to compare the two styles. The French style seems more friendly and a lot like Korean BBQ, even the pan itself. I really like the raclette grill, which I thought it could be a very useful and versatile tool, especially the one with individual pans. I wonder if the French people have ever thought of grilling meat, mushrooms and other vegetables. I can imagine cooking eggs in them! 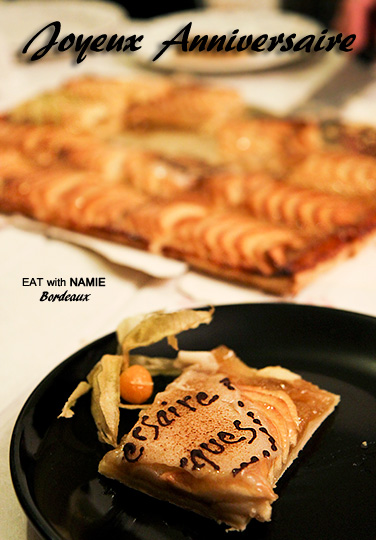 The huge tarte de pommes was really nice, and after all that food came the entertainment. It is always nice to have people who have a good taste in music, even better, people who can play musical instruments and sing. Luckily, the main guy was a musician. As the photos can’t really deliver the true ambience of the party, I decided to make a video and I suffered for two days, trying to put the footages together using a basic free Windows program, which kept crashing and shutting down on me about 10 times. I was getting more and more frustrated and was on the verge of abandoning the project but I’m glad that I was persistent and now I know how to deal with the technical issues in the future. Perhaps it is time to upgrade my laptop. Though I am not good at making videos, I like dabbling in different things and it is part of the joy I have in life, whether or not people appreciate what I do.

I hope you enjoy this little video I made to share with the new encounters who I met at the party but couldn’t talk much because of the language barrier. This is my own way of expressing my gratitude for the invitation and the hospitality. I like doing things for people rather than words. So voila, here you go.