I can’t have enough of canard. I just love it and it’s so good that it’s plenty in all kinds of forms, pate, confit, magret, cutlets, which I’ve been enjoying recently as an alternative to the magret. I think tomorrow I might have the photos of duck cutlets, which I will serve with caramelised carrots and spring onions in orange carrot cumin sauce.

Magret de Canard is so simple to cook but there is one crucial fact that people miss and fail to achieve the perfect doneness. As the fat on one side is so thick that the heat doesn’t penetrate through it to cook the meat, therefore you should always cut a criss-cross before cooking, and also put the meat in the pan before heating the pan so the temperature of the meat will gradually rise, which helps to cook the meat evenly. 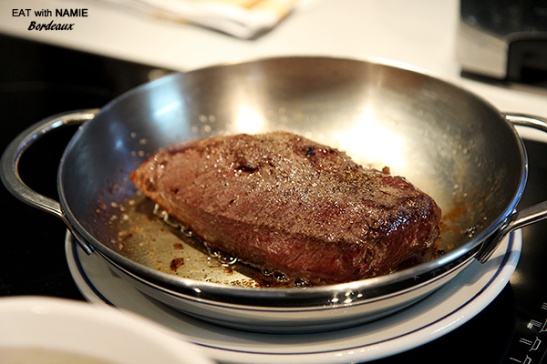 Magret de Canard is best served in medium-rare and with nothing else but some salt and pepper. Oh, yummy! My tummy is growling and my mouth starts to water, and I can see my lunch time is very close. Look at the scrumptious looking duck meat done to the perfect doneness. 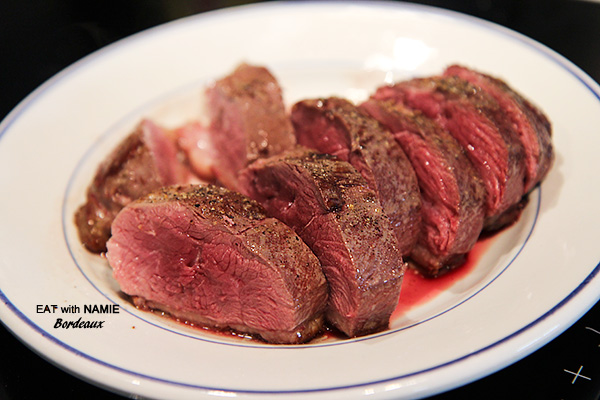 To accompany the dish is the reassembly of leftover vegetables of potato and cauliflower. So called gratin is a convenient way to give a make0ver to leftovers. You can simply arrange the vegetables and add a dollop of butter, and then grate some nutmeg for lovely warm aroma before covering the top with parmesan or any aged cheese.

Last night I made a similar dish to get rid of cauliflower and this time I added jambon and Comte cheese, and it was so tasty and made a meal on its own. To wash down the delicious meal, Chateau Fontesteau 2007, Crus Bourgeois, was just superb. It was one of the most lavishly aromatic and complex wines I’d had this year. Being a woman, I like wines that have sophisticated aromas of fruit, spices and flower with a lingering taste of earth and spices. Chateau Fontesteau 2007, composed of 65% Cabernet Sauvignon, 20% Merlot, 14% Cabernet Franc, 1% Petit Verdot, had all I would wish in wine. It really showed off cassis, violet and clove-like aromas at the beginning and later hinted more grassy, forest-like, char and mushrooms.

Ah, I remember saying, smelling the wine three hours later, “It reminds me of being inside a sauna built in a barnyard in a Swiss forest.” What would this mean in wine tasting? The wine was also very capricious in the sense that the taste changed with food as the spices and herbs in food enhanced the flavours of the wine in a very pleasant way. The winemaker’s website emphasises the use of Jupilles oak barrels and the natural, near organic viticulture, and I don’t know if any of them would have anything to do with the taste but I just thought I’d mention it.

Finally, it’s time for cheese. From today, I started to scribble down the names of the cheese I buy as it became a nuisance to look for names afterwards on the internet. Some cheeses are so regional that information isn’t available online. While stocking up my cheese at the same fromagerie at the Capucins market, I took down the name of the cheese which I forgot and couldn’t write in my previous post, so I corrected the name, which was La Gabarre du Port d’Aubry; so long! No wonder why I forgot it, huh?
But I didn’t forget its unique taste and I can still feel the thick velvety cream sticking to my teeth.

The cheese I have today is St-Maure de Touraine(front), which is quite famous, Pouligny Saint-Pierre, and Le Carré du Poitou. The first two are my all time favourites but the last one was a new one and it was very fresh and creamy, which at first didn’t interest me but after a few days’ maturing, more mould built on the exterior, which improved the taste a little.