Working around the kitchen always involves handling dangerous tools, knives and heat. I’ve had so many cuts and burns, let alone dry and rough hands. This time I got my finger cut really badly while running a knife through the hard crust of bread; the knife slipped and cut my finger instead. Oh, the sharp Opinel knife, my lover! Ouch, what a finger-stabbing that was!

The cut was so deep that it wouldn’t stop bleeding. I had a bandage on overnight but the cut wasn’t closed and was still bleeding the next day. Then I remembered how I used to use turmeric for wounds and inflammation. I put some turmeric power on the cut and it stopped bleeding immediately! 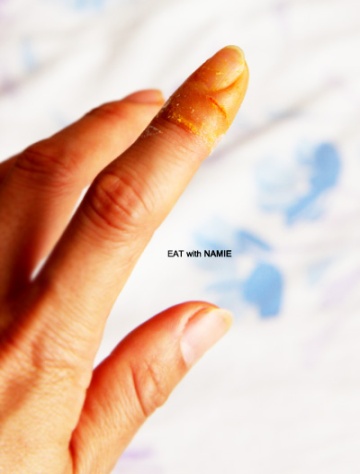 I have many recipes with turmeric on my blog as I love it for everything; the colour, the aroma, the taste and the health benefits. I add turmeric powder in marinade for meat and fish, or rice dishes such paella, fried rice, couscous, etc.; I sprinkle a little over vegetables. Who isn’t in love with Indian vegetable or chicken Korma? – I should post my curry recipe soon as it’s a curry season. Turmeric milk tea with honey is a winter treat along with Chai, the cardamom-spiced, aromatic Indian tea.

Many people get sick with colds around this time when the temperature gap between day and night is big. So I want to share my little wisdom of keeping the unpleasant cold or flu away or get rid of it completely at the first symptom, which is normally a sore throat. Most well-known home remedy for common colds is ginger, lemon and honey tea. What my mum would make for me when I caught a cold is rather complicated; a pear stuffed with ginger, spring onion roots and honey. It did a wonder every time.

I prepared this tea when Mr.O felt sick, sneezing and energyless, after a lovely seafood barbecue dinner at his parents, as if coming down with a cold. I ground 6 whole black peppercorns to add to the tea as pepper helps with absorption and I also added some lemon juice for an extra benefit of detox. I felt I also needed to rejuvenate my system that had been overloaded with stress and caffeine after the hectic life throughout the summer. So it became our morning kick-off drink breakfast.

After drinking the turmeric tea, Mr.O got up the next day, feeling recovered and energetic and so did I. Turmeric tea sounds quite unappetising but the taste is really good with honey, nothing in it to remind you that you’re drinking curry! I even sprinkle it over butter-honey spread toast or ice cream or yogurt. Don’t make judgement before trying it. I’ve convinced many people to try it and all have liked it.

I also make a turmeric yogurt facial mask and use it sometime, and it works as a facial scrub and removes blemishes.

If you’re still not convinced, please read the following.

It is also a natural painkiller and has been used as a treatment for depression in Chinese medicine, plus it may enhance fat metabolism.  Here are 20 reasons to add turmeric to your diet.

Convinced to try my turmeric tea now? Here is the recipe then.  The recipes for delicious Korma curry and Turmeric cake will follow soon.

Ingredients (for each serving)

1. Put turmeric and pepper in each cup and leave it for 2 mins.
2. Add honey – I add it later because I’m using raw honey and I want to keep the good properties in honey – stir until dissolved.
3. Squeeze in lemon juice – after finishing the tea, you can eat the lemon slice!