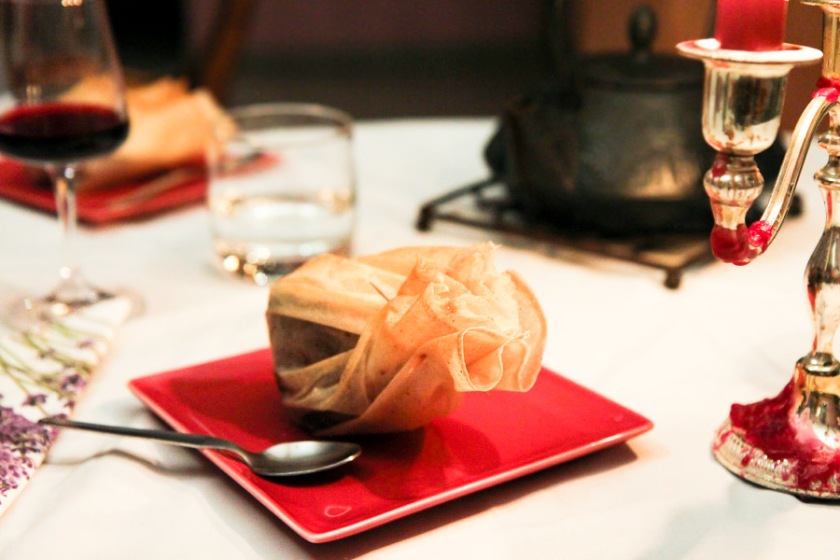 I dream, therefore I live…. this is the signature of my email. A dream is to dream but some people live their dream, or at least live to reach their dream. I know a few people who have gone out of their way to live their dreams, and most of them made a life-changing decision in their 40s so it’s never late to live your dream. Perhaps, the later the better; you appreciate it more when it happens late, like in the film, “In pursuit of happiness”. Having been hopelessly obsessed about food, I know what it is like to go to a job every day and think of nothing but food while working and to find yourself gawking at cookbooks and food magazines, and to feel most as if you are in heaven when inside gourmet stores. It’s time to do something about it if the voice keeps nagging at you.

The long introduction was to tell you a little about my recent inspiration, the person behind the kitchen top, creating delicious things out of nothing like an alchemist. The instant I met her by chance, I detected in her a certain energy that made me want to know more about her. I heard a little about her through Cyrille, who doesn’t talk much of others and only said, “You meet her and find out for yourself.” 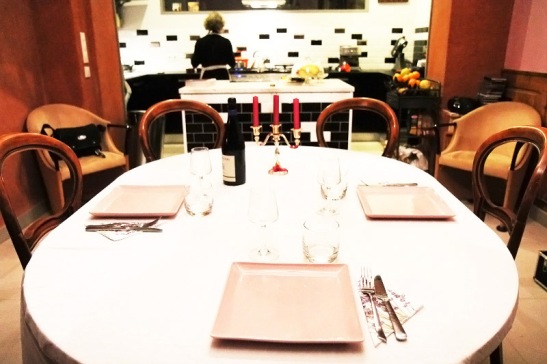 She generously invited us to her Table d’Hote cafe, called Papilles en fête, despite her hectic schedules and I was very excited about meeting, cooking and eating with her. Every single story behind establishing this dream place amazed me and sowed little seeds of hope in my heart.

In her cafe, it wasn’t just taste buds in a feast or party (meaning of her cafe name), but also eyes and ears. Her artful touches, due to her professional background working in museums and theaters, were palpable from the interior design and furniture to tablewares. She transformed an old fruitiere (cheese factory) into this amazing looking studio.

“The moment I saw the empty space, I knew instinctively that this was exactly what I was looking for and bought it on the same day and started working on it.”, says she.

She put me in charge of setting the table to suit my mood; well, I liked the idea. Ok, then  pink and modern. 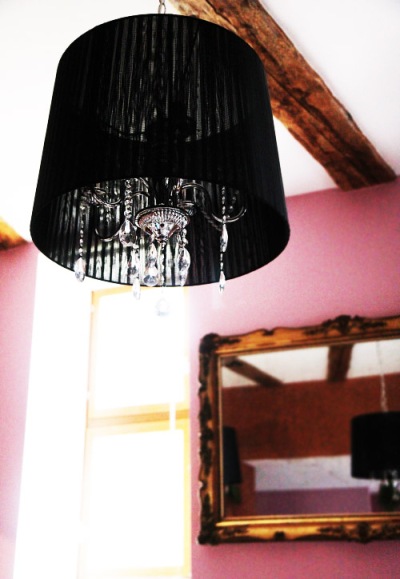 It’s only the beginning, and her food was amazingly delicate and delicious, which attributes to her Belgian background plus extensive travels, or her innate talents and passion. As a Belgian living in France and working in Geneva for over 20 years, her cooking style is very unique with a mix of tradition and modern.

The dinner was supposed to be a combined work, not formal, so she put me in charge of making a dessert as the main had already been prepared. I really liked her way of cooking. Instead of imposing a fixed menu, she asks people what they feel like to make or eat. From years of training and experience, she has recipes in her head but takes them out wisely. She made me check the fridge and the pantry for inspiration so I chose pears and chocolate, well, kind of a safe option in a way. I made a classical chocolate-filled pear pastry, which you will see soon.

For the entrée, we made savoury soufflés together. Watching the alchemy of egg whites like in the oven a volcano eruption was really cool; better than eating the final result, which doesn’t last long. “Flop!” 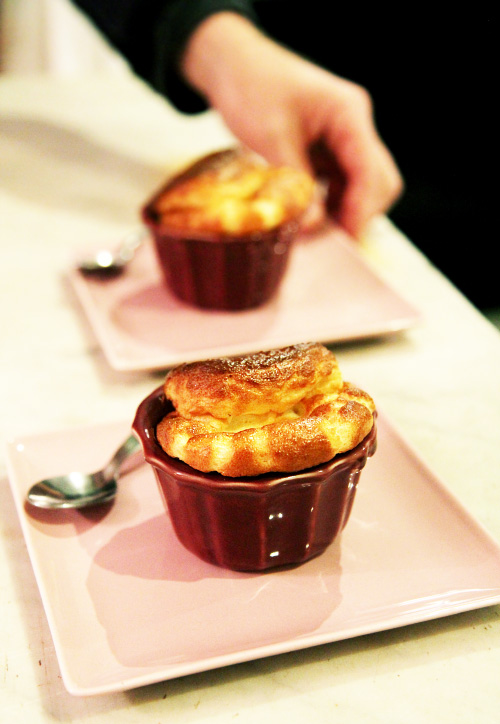 The delicious soufflés were followed by Tagine with chicken and fresh figs. Like I mentioned before, she’s creative and flexible, and uses only seasonal ingredients. It was a very elegant take on Moroccan tagine dish, which I often find too heavy. She did a great job in making such light and flavoursome tagine. 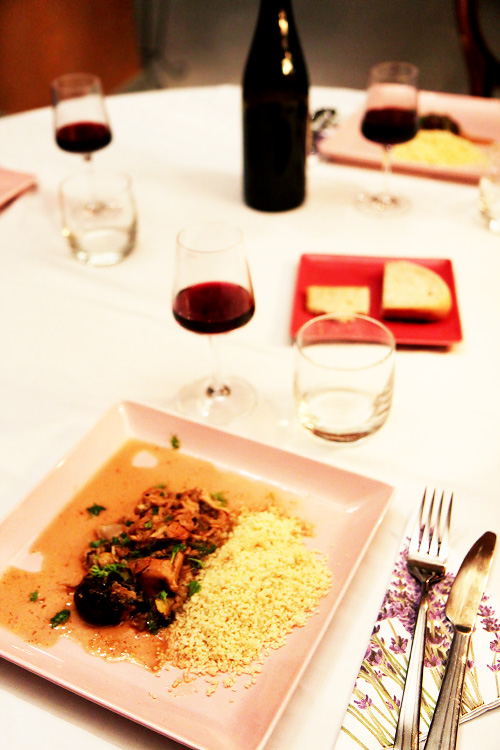 It was exquisite and I devoured it without words but only with inaudible hmms and ahhs. You know how I love to express my pleasure with sounds but at this chic table, I learned how to refrain myself.

The main was followed by the grand dessert and the Belgian cheese board as a surprise. I was lucky to be there right after her parents had visited her and brought some Belgian cheeses. It was my first time tasting Belgian cheese and was surprisingly satisfied.

When I think of it, I don’t know much about Belgian food. Do you? Besides beers, chips, mussels, waffles and chocolate? I learned a little about Belgian cuisine from her that evening. 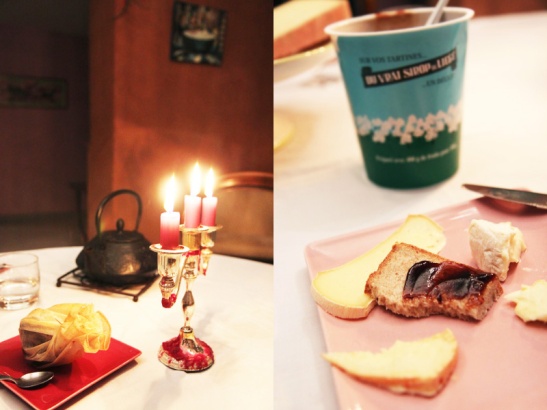 I told you that her place was where eyes, ears and taste buds have a feast. She is an excellent host; she cooks, she is a fantastic story-teller and performer, she plays the arccodian and she has a great collection of music to entertain the guests throughout the evening. 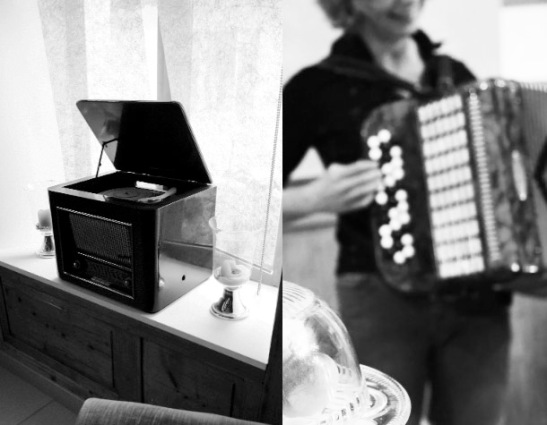 I came home, with my heart full of joy and my tummy full of deliciousness. With all the inspiration she gave me, I wanted to return the favour and offered to do some food shots for her work; the real reason behind it was to visit her cafe at daylight.

So here I came again to the place I had such a wonderful dinner a few days ago.

She was hard at work, producing sweet treats to deliver to cafes. She looked different and serious in her white chef’s uniform but still in high spirits as usual, hymning and smiling while cooking. That is the energy of a person who enjoys what she’s doing. We listened to Edith Piaf, the woman whose energy for life and love inspired me so much that I had cried my eyes out, first watching the film, La Vie en Rose, and again reading one of her memoires gifted to me by a friend, who is also living his dream as a film maker now. 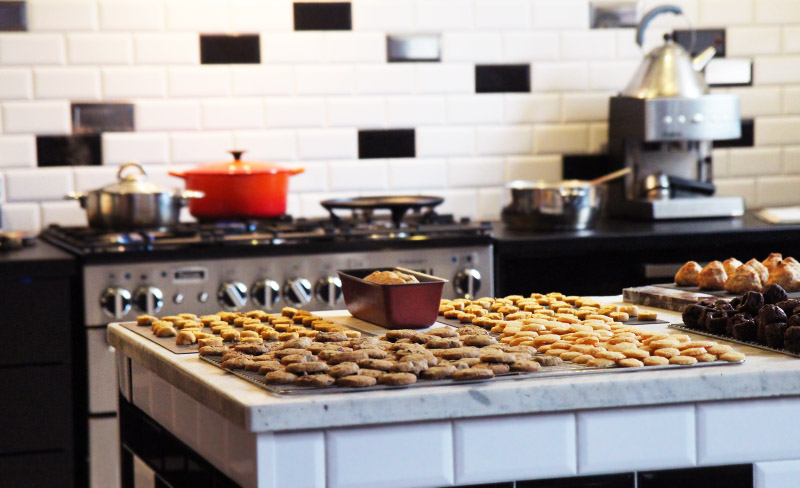 Previously I tasted some of the biscuits at the market and Financier with Pear and Macaroons with Orange Blossom and Raspberry are among my favourites because of the delicate flavours in them. You can see more of her delicious biscuits, sweet and savoury on her facebook page. Her savoury biscuits, which I described here and which we took to Cyrille’s family birthday lunch and his family gobbled them down with a surprised look on their face, repeating “What are these? C’est bon!” 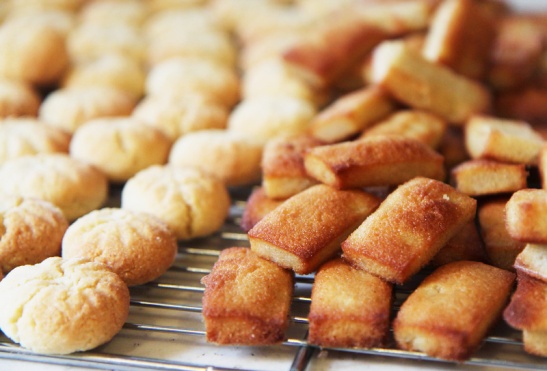 The chestnut cake she created, it being a chestnut season, was delicious, too, and you can see its photo on her facebook as well. 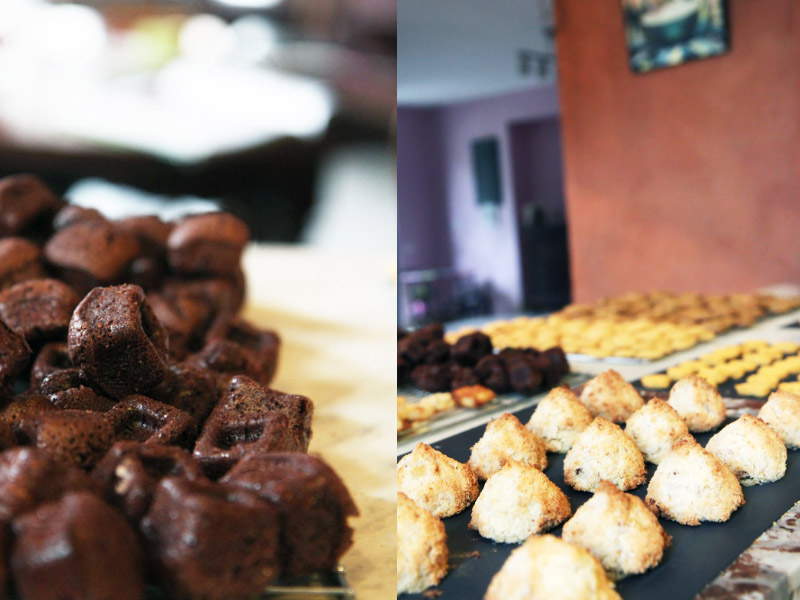 After the biscuits, she started to cook savrouries for special orders. The menu was a Belgian fish stew and the smell was so good that I wanted to stop taking photos and dive into the pot. Taking photos and, at the same time, trying not to get in her way was a bit challenging. It was different to doing the photo shoot for my own food in my own kitchen where I could easily adjust lighting and props. Also, I had to be quick and discreet.

One of her specialties is to create something out of nothing and everything. She told me a story about a customer who brought in raw bloody meat of boar he had hunted and asked her to make a terrine. Despite being vegetarian, she took her job professionally and made a terrine, which her guests were very pleased with. The ability to cook things outside of cookbooks is a gift and…..a bless when I come to think of it now. 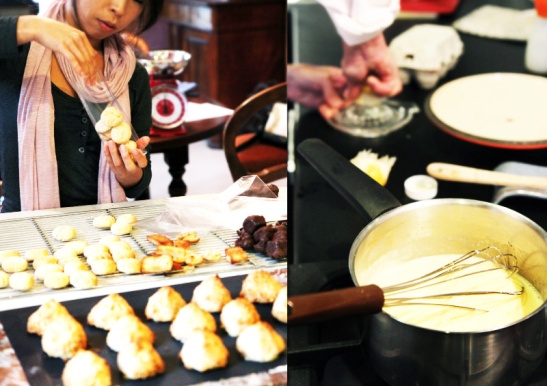 It was a good experience and I was glad to have an opportunity to reciprocate her generosity with time and advice, which would remain with me until and after I make my dream come true as she had done. I hoped she would like the photos I did for her and was happy to hear that she did. It was my official work as a food photographer and I thank her for making me realise I’m more talented than I think. 🙂

I hope to meet her again and do a better job for the photos. If you’d like to dine with her, here is the contact information.