Yesterday I made tartare au saumon fumé, well, smoked salmon tartare;please excuse my overuse of French. I’m still in the holiday mood. The smoked salmon was a gift from a Canadians guest, which is home-made. I happened to have some avocados so I threw it in a bowl with chopped tomatoes, onions, garlic, dill, etc. It’s simple but delicious. That dish reminded me of this post I had been meaning to post but been delaying because there is so much rambling in it. I hope you don’t mind it but at least enjoy the magnificent photos of the Jura mountains at their best.

Just down the road from the house there is a path in the woods that leads to a bridge or a river. We set off for a walk to look for mushrooms, but the walk was the main and the mushrooms were just extra bonus, just the way one’s life works. Reaching a goal isn’t important; what’s important is what you meet on the way there.

We didn’t have much luck with mushrooms and we even lost the right track going down to the river. As I didn’t want to go further, we retrieved the path leading up to the road and reached the bridge where I had a bang of dizziness. I wasn’t sure whether it was got overwhelmed by the stunning view that came before my eyes or it was from coming to an open space out of the dark woods. Looking down from the bridge, I felt like being sucked into a black hole. 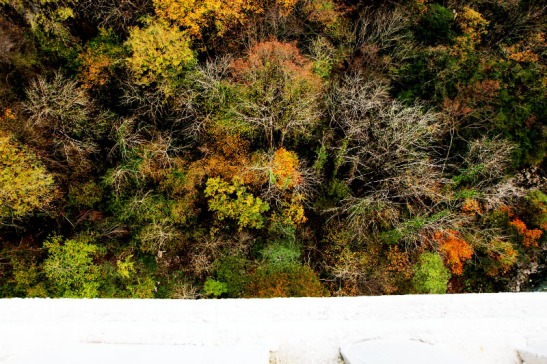 I’d never seen such a beautiful view before. Having lived in a warm country since I left home, I seem to have lost my colour reception. So when I see colours, I tend to feel comforted and overwhelmed at the same time. Of many photos in the gallery, one of the photos hanging on the wall in my living room is this and whenever I look at it, it seems to talk to me; the sea, the path, the colour. 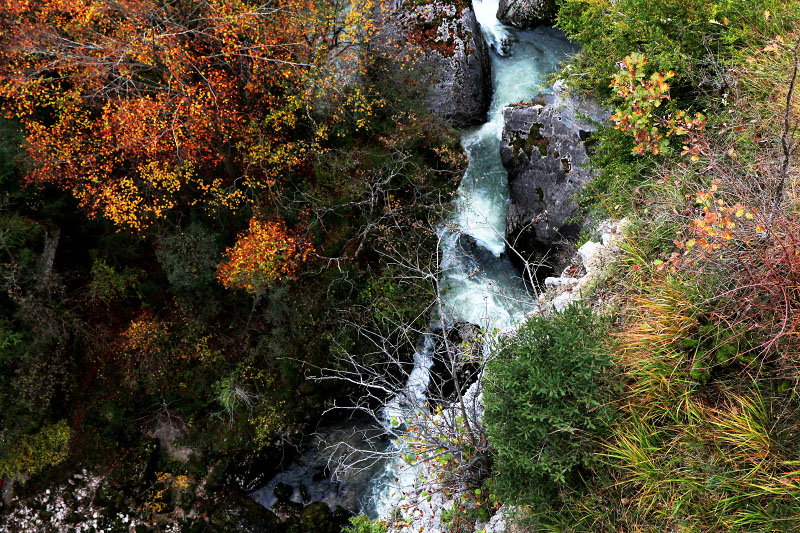 I think the photo above is going to be printed and hung on the wall of photos one day. Don’t you think it’s just beautiful? The trees that have lost their leaves look pink or purple for real.

It’s so pure and natural that I feel like being a child again, throwing leaves around, but at the same time the wildness and the darkness of forests make me alert and strong. I sometimes feel like a caterpillar inside a cocoon.

Anyway, I love foraging food, picking up fallen apples that are plenty in people’s gardens, which they can’t be bothered to collect, nuts and picking mushrooms. This only thing I can’t do is hunting animals. If I live in a forest, I will probably become vegetarian, or maybe just eat confit de canard when I really miss it.

My dad raises a dozen chickens for eggs and says it costs more to raise them than to buy eggs because they eat a lot, plus he doesn’t just give grains but also chops up cabbages, broccoli, carrots, apples, etc. That’s why dad’s eggs have watery whites. When the hens get old and stop laying, one has to decide whether to keep them as pets or cull them.

Having never lived in a countryside, the idea of killing animals never occurred to him but he had to. One day my mum described the event to me and it sounded hilarious. I never thought he’d have a problem with killing chickens. After days and weeks of my mum nagging him to take the action, he finally did the deed, with his eyes closed and with such a force in order not to make a mistake and repeat the process, and he refused to eat the chicken later; my dad is a big meat eater, by the way. But he got over it and now he has no more problems with culling old hens. I sometimes think women are more cruel than men. 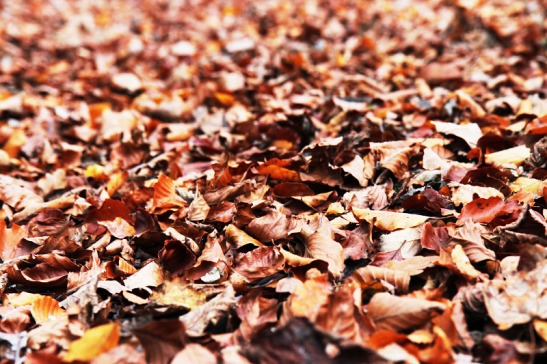 I told you a little story because it’s better to read something than just scroll down the photos. With fancy gadgets nowadays, people no longer read or write long sentences, but I still write in the stream of consciousness like Virginia Woolf, or simply put, I just ramble, jumping from one topic to another. Like la madelaine de proust, these autumn leaves somehow triggered melancholy in me. 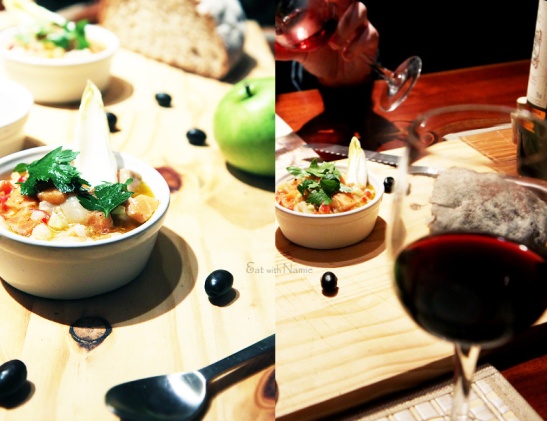 We came home with only a handful of mushrooms, called pied de mutton (goat’s feet), but our hearts filled of thoughts and emotions. Cyrille offered to make his signature dish, seafood tartare, as an entrée. I remembered how good the salt-cured salmon sashimi and the salmon tartare and all other yummy things he cooked in the Sydney flat. This time he made it with mixed seafood, salmon, scallops and squid. He always emphasises that for tartare, frozen seafood is better than the fresh.

With a bit of chopped shallot and garlic, a drizzle of olive oil and lemon, and a tiny bit of chopped red capsicum, topped off with piment d’esplette (chili pepper from Basque), which he loves came this delicious seafood tartare, which I thought was better than ones I’d eaten in restaurants.

Looking at the handful of mushrooms, he intended to make a gratin with the mushrooms but I suggested a tapas.

There is the board of entrées with foraged apples, and the main, which is a prawn gratin with bleu de Gex cheese is still cooking in the oven.

Being a host can be quite challenging, trying to please people by attending to their needs. Imagine having to eat fondue and raclette for 5 days in a row because you have different guests who want to eat it. The only thing I refused to eat during my stay was fondue and raclette because I got tired of it while travelling in a winter time in France and Switzerland. Every host offered one or the other at that time and I had to eat it for a week. Like I did with snails when I first went to France. 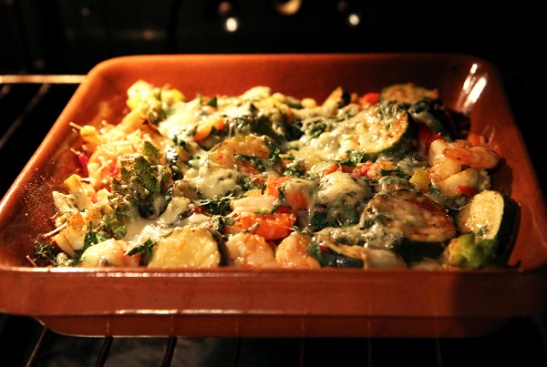 Especially after all the eating cheese and cream every day, though with pleasure, we needed to eat in moderation sometimes. So I made the prawn gratin a bit light with lots of vegetables and a touch of local flavours, Bleu de Gex and a splash of Vin Jaune.

Cooking without a recipe often works better, using only what’s available and being creative with it. The prawn gratin turned out amazing. It’s funny to brag about the food I cook but I have to because no one does it. Cyrille really liked my gratin. Next time I will go more bold with the blue cheese.

Can you see what is in the gratin? It’s so simple that writing up a recipe would sound silly. Arrange any vegetables you have in a baking dish, throw in some prawns, splash some white wine and drop some blue cheese in and then cover it with grated Parmesan, and finally pop it in the oven at 200’c for 30 mins. There is no tomatoes in it and the reds are chopped red capsicum, but only a little, as I find both tomatoes and capsicums overpower the main flavour.

French cuisine is all about subtlety and natural flavour. The serving suggestions would be with couscous or rice (basmati or brown or wild rice).

Here comes the too-easy-to-be-real Fondant au Ice cream! My super simple fondant au chocolate recipe has gained quite a fame. My quick and easy fondant au chocolate left a huge impression on Cyrille and he’s been making it almost every night. Well, I understand that. I also showed Mr.O how to make it and he couldn’t believe how easy it was and how decadent delicious it was. He took a photo and posted it on “Whatsup” immediately. My foods seem to have created a bit of stir here in a minor network of the Turks who are curious about foreign food.

To make this scrumptious dessert, which hot&cold and sweet & sour meet, just follow the fondant au chocolate in this post, and instead of the raspberry filling, put a scoop of ice cream in the centre – preferably cassis or red forest fruits, but caramel or vanilla, ice cream with any flavours will do, too, but I’ve never tried the combination, but I’ve seen it in some restaurants.

Oh, what a gastronomic evening! Cooking and eating together gives people so much joy, as it should, and let’s all try not to turn into people who don’t talk and just play with their smart phones at the table, not even looking into each other’s eyes for once while eating. 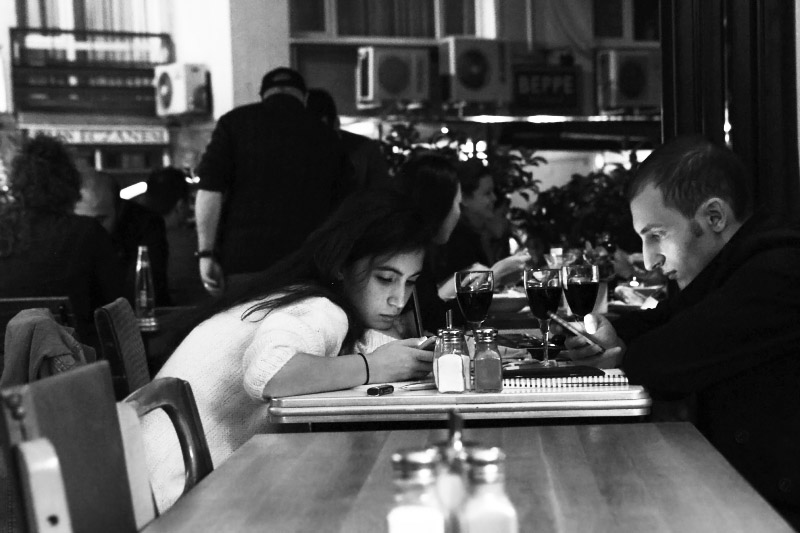 If you have any questions about making the dishes in this post, please leave a message. I will happily answer to your questions. Thank you for reading.