I’ve done it finally! Now I’ve unearthed the mysteries and secret talks surrounding Georgian wines and Caucasus mountains! My devoted love and curiosity about wine, which started in the New World, has led me to another ancient wine-producing country.

Here I am in Batumi, Georgia, where I entered and re-entered the Sarpi customs building at the Georgia-Turkey border 8 times in total, messing up my passport with 8 stamps on a single journey. Duh!

I’m crossing the border where mosques are instantly replaced by churches. The Sarpi customs building is built in the shape of a key to heaven, by the way.

We arrived in Batumi later than scheduled due to the delayed flight in Istanbul. My first impression of Georgia was very different to what I’d imagined. Batumi had many casinos and the area around them was clean, well-maintained with renovated old buildings as well as modern architecture. 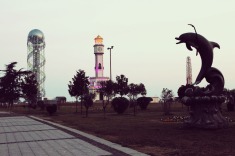 Our plan was to catch the overnight train to Tbilisi, departing at 22.15pm and arriving at the capital city and the wine city at 7am. We ran into a lovely wine bistro where live jazz piano music was being played and locals were engaged in conversation, drinking wine and smoking. Oh, god, people still smoke indoors everywhere! Our first exotic meal was pork rib and a glass of Saperavi. The satff were really friendly and we had a good feeling that we’d have no problem despite that we couldn’t read the wiggly exotic language and no one spoke English.

I, with my proud linguistic skills, challenged myself with Georgian alphabets just to realise that I needed at least a few days to learn them. But at least I was armed with the magic phrase, which gave us a warm welcoming smile from locals from time to time, “დიდი მადლობა“, which means “didi madloba!” The written alphabets look really daunting, don’t they?

I think one of the enjoyable parts of the trip was seeing old cars. 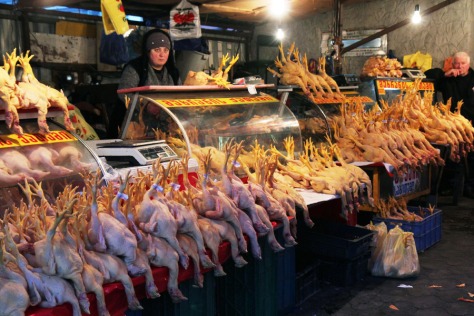 Oh, yeah, we got lucky to stumble upon a farmer’s market near Tbilisi station. Scanning stalls of local produce gave us an idea of what we’d be eating for the next few days. Look at all those chickens! There were many pig heads on display but they’ve been censored by me in this post. You’ll know why I mentioned the chickens later.

One lady walked past with a tray and my instinct knew it was cheese bread, Khachapuri. I read about the good and bad cheese bread, and instantly I was sure it would be good; anything made fresh at farmers’ markets is the best. Yes, I was right. It was DELICIOUS! You’d say how “cheese+bread” can be any different to other bread with cheese. You’re wrong!

Even Mr.O liked it, comparing it with Turkish cheese borek. It was light and crispy, without the heaviness of cheese, not greasy. We tried more cheese bread in various places on our trip and threw some away because they were too greasy and tasteless. Having started with a high standard of cheese bread, we seemed to be doomed to be unsatisfied by any other cheese bread afterwards. I searched the internet for various types of Georgian cheese bread and, according to this site, it seems like the one I had was Khachapuri Osuri. 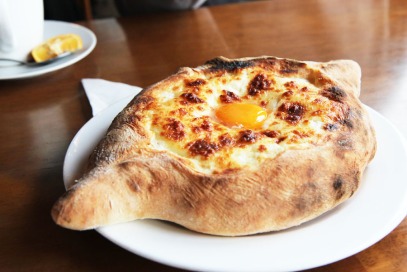 We stayed in the Old Town and ventured out to the city centre. Contrary to the somewhat artificial city, Batumi, Tbilisi revealed the true Georgia. There were so many abandoned and weather-beaten building from the Soviet era, construction in progress along with old monasteries. I got the impression that the general public were quite rigid and unsmiley, though people we had a personal contact with were quite helpful and friendly. The young help-desk staff at the National Museum, for example, and the waiters at the restaurant she recommended, and above all, the young guy at one of the wine shops, which I will introduce at the end. 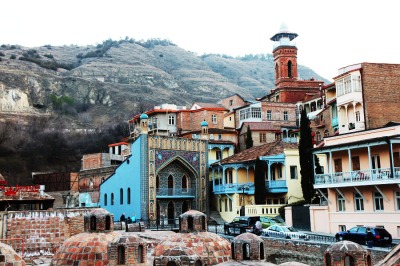 While walking along the main boulevard, we came into this scene at a church where a traditional marriage blessing was happening in medieval clothes, with Georgian food and wine. One lady nudged me towards the table, with the gesture saying, “C’mon, help yourself to food.” Feeling like an intruder, but at the same time, a lucky witness, I grabbed a glass of home-made wine. That was the very first real Georgian wine I tasted. Hmm… semi-sweet white wine in deep amber colour with grippy tannins and low alcohol. It somewhat reminded me of the wines my dad used to make, yellow, cloudy, oxidised sweet grape juice with a kick. 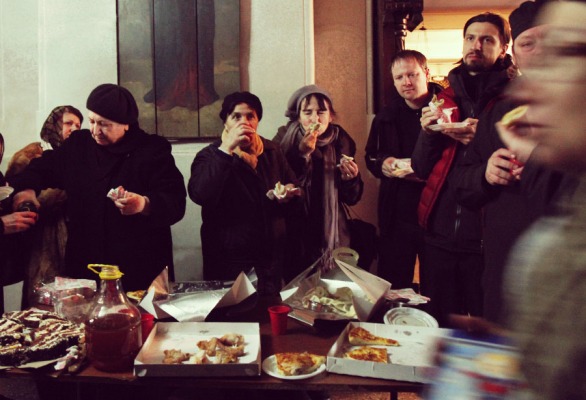 At lunch time, we ate at an off-the beaten track restaurant recommended to us by the girl at the museum; she said she goes there with her friends. Apparently, so, as I couldn’t find any references to the restaurant, called Georgian Accent, on the internet. Not being able to read the menu, we had to gamble when ordering food. But we knew the dumplings, Khinkali! So we ordered it for entrée, which came after the main, ha ha! We learned later that the dumplings usually take longer time, if made fresh, not the defrosted ones. Anyway, the dumplings were SUPERB! 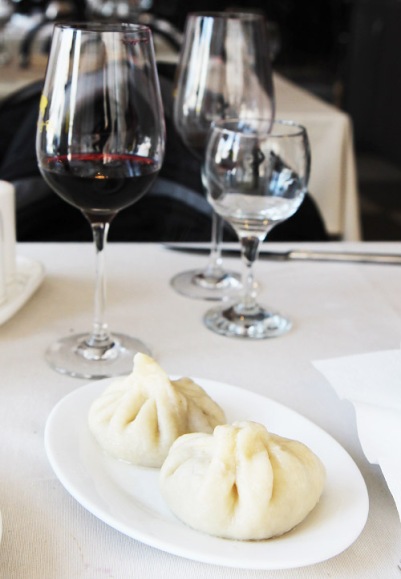 So did the other dishes, Ostri (spicy beef stew) and Kotmis Satsivi (chicken stew with walnut sauce) – find the photos here again. Both were good, but our favourite was Ostri, melt-in-the-mouth tenderness of the meat and rich aromas of coriander, reminiscent of Thai or Indian curry, Korma. But the chicken stew surprised us big time. Wow, it was a real wild chicken and was so chewy that wine was necessary to mince it in the mouth to digest it. The wine we chose was Mukuzani, known as premium Separavi.

Afterwards, we took the cable car up to the hill where the tall statue of Mother of Georgia, Kartlis Deda, is standing, holding a wine bowl in one hand for friends and a sword for enemies in the other. 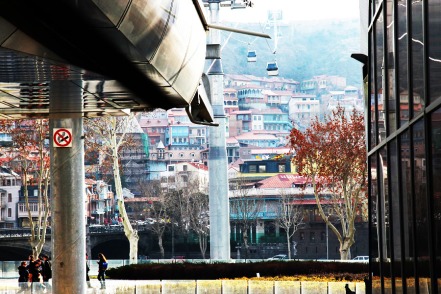 In the evening, we walked around the old town, tasting wines at various wine shops, as part of searching for wines to take back home. Located in front of the main square, Chateau Mukhani was an unmissable stop so we took a wine tasting offer. There I tasted Georgian whites for the first time, which was very nice with lovely floral and honey aromas, and some reds but the lady there wasn’t very helpful so we didn’t stay long. 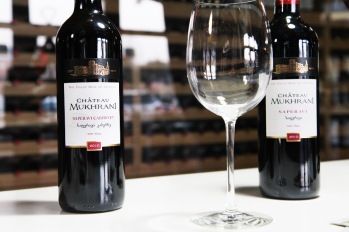 We stopped by all the wine shops walking our way up to our hotel and found the best one, Vinotheca, where we tried many varieties and got a good lesson on Georgian wines by the enthusiastic and knowledgable wine-loving staff, to whom I gave many thanks to when I returned there on our last day. The wines at this place were the most honestly priced and their recommendations were trustable unlike the others. I had a WOW moment when I drank Chelti of Qvevry. Somebody put oysters in my glass!! I was told that the wine was fermented in the ancient clay amphora, called Qvevry.

What? I thought all Georgian wines were made with that traditional method!

My knowledge was corrected and updated and I decided to visit one of the wineries using the qvery method. I was also impressed by 2008 Gunashauri from the same Chelti Estate, which had dark, spicy and leathery with supple tannis.

I suddenly had the desire to discovery more about the new wine flavours. So the next day we headed for Signagi in Kahketi, where a small winery called Pheasant’s Tears is located. As I’d been following wine trends and blogs, I’d heard of the winery before and only hope there it wouldn’t turn out to be a tourist trap or false advertising of the media.

I’m going to continue on my tasting experience at Pheasant’s Tears in the next post, if you don’t mind. Untill then…