I’m tackling the Turkish cuisine today. I love discovering unusual and native ingredients and incorporating them into cooking. I was given this strange looking fruit preserve, turunç, whose identity was revealed through the google search as bitter orange or Seville orange. Of course, I knew  Seville orange but not in this look, which reminded me of animal intestines or something. So when Mr.O’s mum, with a suggestive look, held one piece up to my curious face, I was a bit scared.  But after knowing what it was, I was amused by the discovery because we have similar fruit called Yuja, which is unedible sour citrus, therfore made into marmalade or tea. My mum uses the marmalade when cooking for its aroma and effect of getting rid of odors in fish or meat. Anyway, it was very sweet and apparently according to the Ottoman customs, was offered as a spoon sweet (Aegean Eating) to show the host’s hospitality. Another recipe for Bitter Orange Jam is found on Give Recipe. 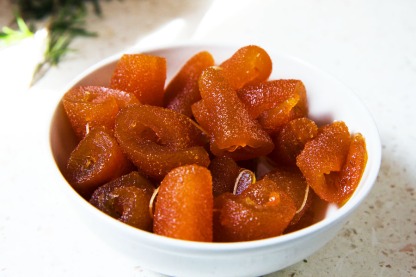 Compared to the look of Yuja, this jam looks far more interesting and pretty, doesn’t it? As I’m not much of a jam eater, the only way to finish this up is to use it in cooking; biscuits, cake, or giving fragrant sweetness to food.

Another thing I’d always been curious about Salep, which is ground roots of orchids, but I hadn’t seen or tasted it on its own except in a milky tea called Salep, which is exclusively a winter drink and is topped off with lots of cinnamon. My French guests loved Salep so much that they wanted to buy some to take back home, but I’d never thought of buying it, let alone making it at home so I didn’t know where to buy it; nor did Mr.O.

As it was one of the rare days that my brain was ignited with a creative spark, I decided to make something unique. My initial idea was to make Hungarian Cheesecake, which I had a fond memory of eating and to which I was going to add a strawberry glaze, then I changed my mind to Italian Ricotta Cheesecake. Still, I wasn’t sure which and finally decided to make Ricotta Yogurt Cheesecake with Salep to add in a little Turkishness. The reason I added salep was partly because I was in need of emulsify the cheese filling. I don’t like using cornstarch or gelatine for some reason, and while looking for a substitute, salep came to my mind. The mysterious ingredient in the famous chewy Turkish ice cream is salep and I wanted to see if it could work in cake as well.

Here is what I used for the special recipe out of my head and it includes many nations. Turkish cheese and salep, Mersin bitter orange, Georgian ChaCha, which I soaked the chopped orange peels in.

I’d never used yogurt in making cheesecake before but why not? Certainly, yogurt is more dispensable than cream cheese. And I figured that salep would thicken the liquidy filling. But how much salep should I use? I had no idea. I had a taste of the salep powder to see how strong it was, but I realised it wasn’t the pure salep power but a mix of sugar and milk powder! Mr.O, having never bought salep before, didn’t know what to ask for at the market. Well, I already had it and had to do with what I got. 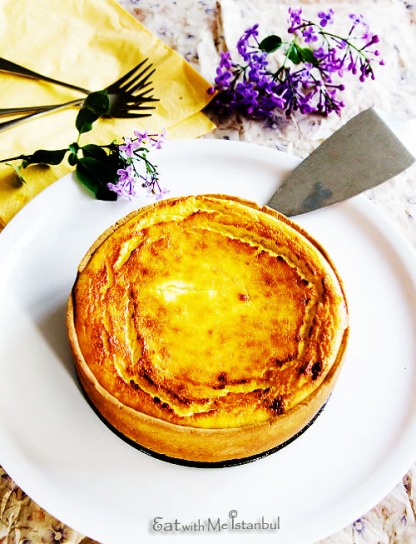 After I made this cake, I went to the market myself and finally got pure salep powder, which was rather expensive. The guy was kindly enough to give me a precaution to use a very little amount each time; great to hear that because I can’t possibly pay that price for less than half a cup. Anyway, I couldn’t use it for making cake but at least, I was able to try it in making strawberry balsamic sauce later.

First, I wanted to know if salep is just a thickening agent without any flavour; it’s believed to be an aphrodisiac though. So drinking salep with cinnamon must have been super love food on cold nights, I imagine. Anyway, I got a big surprise when I put a tiny amount directly into my mouth for a taste, which was rather stupid of me.

Wow, it instantly dried my mouth out, sticking to the gum. I imagined it being stuck there forever, but I got it off by swishing with warm water. Phew… now I know the strength of salep that makes ice cream that you even have to slice with a knife and eat with a fork. 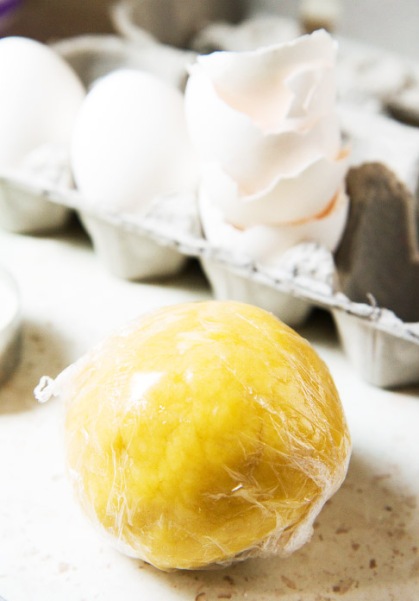 The base is spread with the bitter orange jam soaked in the brandy and the crust has its reserved liquid. I thought about making a biscuit crust but then I personally don’t eat biscuits made with vegetable oil, therefore it would spoil its butter purity. *wink* 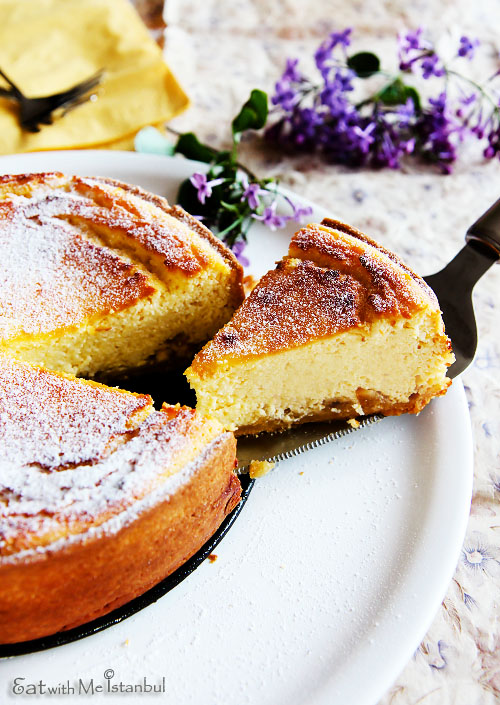 Truly, it was so delicious that one could easily finish the whole cake in one sitting. To prove it, one night a lucky guest came by and I offered a small slice, but he declined as he was too full, however, I pressed on and served a slice, saying he could take home the leftover, but he not only polished it off, but also asked for an extra slice to take home. Convinced now? 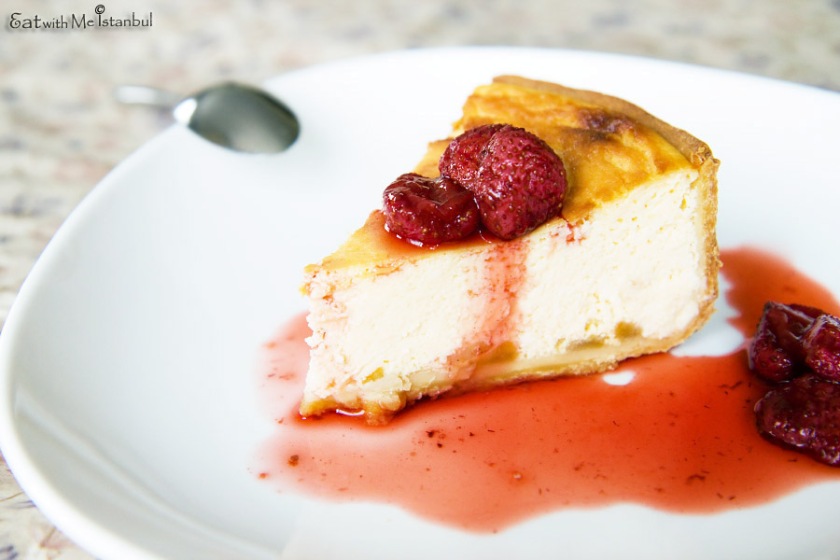 How could it possibly be not good, to be honest? Cheese…creamy, aromatic, and a little exotic; it’s got salep, which gives it a false ice cream feel. My experiment with salep was successful and I got to tackle the two ancient and mystical ingredients. My initial plan was to make a glaze with either bitter orange jam or strawberries, but this is what I ended up with. Later, when I added salep into the strawberry sauce, I could see that it could easily replace gelatine. 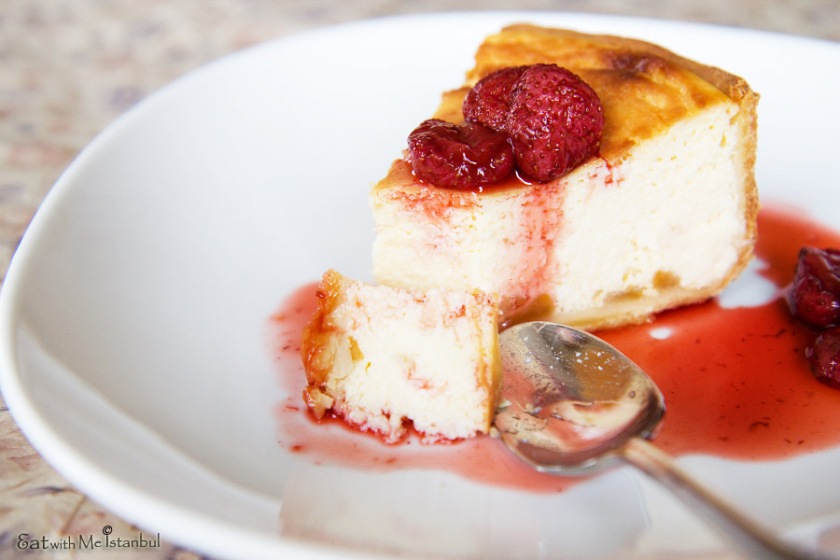 Here is the recipe and you can tweak it according to your fancy. If you’re using a bigger cake tin, just use more cheese and an extra egg. Though this recipe doesn’t really include pure salep in the cake, I’ll try another version with the real stuff and let you know.

As for your knowledge, exporting genuine Salep out of Turkey is illegal and since 1kg of salep powder requires 12 million or so orchids, it’s very precious and it’s exclusively preserved for the production of chewy Maras Ice cream. Hmm, interesting….

For the shortcrust pastry

1. Make the crust: Pulse the flour and sugar, and then with butter until it resembles crumbles. Add egg yolk and liquid and process for a few seconds till the dough comes together. Take it out onto a lightly floured work surface and make it into a ball and chill in the fridge for 30mins at least.

2. Preheat the oven to 180’C and roll out half the dough and place the 9 inch-springform cake tin on it and cut around the edge to fit into the base. Bake for 10 mins and cool.

3. Butter the sides of the tin and roll out the other half of the dough and cut into three strips. Simply roll each strip and lay each along the side of the tin, pressing into the tin to join the edges.

4. Making the filling: Beat the eggs with half the sugar until pale and fluffy. Beat the cheese and yogurt with the remaining sugar until smooth. Add salep powder or almond meal and beat well to mix.

5. Spread the fruit jam on the base and pour in the filling. Bake for 1 hour.

6. In the meanwhile, make the sauce by boiling strawberries with 1 Tbsp balsamic vinegar and 1 Tbsp brown sugar. Dissolve 1/2 tsp salep in warm water and add it to the sauce and gently stir to thicken the sauce – only do this if you plan to make strawberry glaze. Otherwise, simply serve it with the sauce.