Yippee, I finally made it! After the embarrassing presentation of my dolma at a dinner, I had another go at these dried vegetables, which you’ll see hanging in every spice and grocery store in Turkey. They look so strange at first but they’re cored and dried zucchini, eggplant and capsicum, which are the essential ingredients for Turkish olive oil dolma (zeytinyagli dolma), donc, rice-stuffed vegetables.

What you see is chili paste from Hatay, the furthest region bordered by Syria and famous for lots of spicy dishes. Oh, the chili pate is quite addictive, though not as hot as Thai or Mexican chilies. One Sunday evening, I made an attempt to impress Mr.O’s dad, who always cooks for me. But what a disaster it was! I was going to keep the failure secret but I decided to share the story in order to prevent potential victims  like me, who might try to make the dolma. I’d only made dolma with fresh vegetables up to that point. 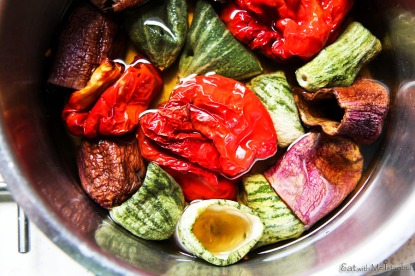 These dried vegetables need a lot of time to soak and cook to soften to an edible state. Even though I soaked them in hot water for 2 hours, it wasn’t enough. I was meant to boil them for half an hour or so. When I’d decided to bake after stuffing them with lentil and shrimps, I had a little suspicion that the veggie cases won’t be cooked enough and instead will go dry  Yep, the worst happened. So we all had to just eat the stuffings, but it was still tasty, they said. 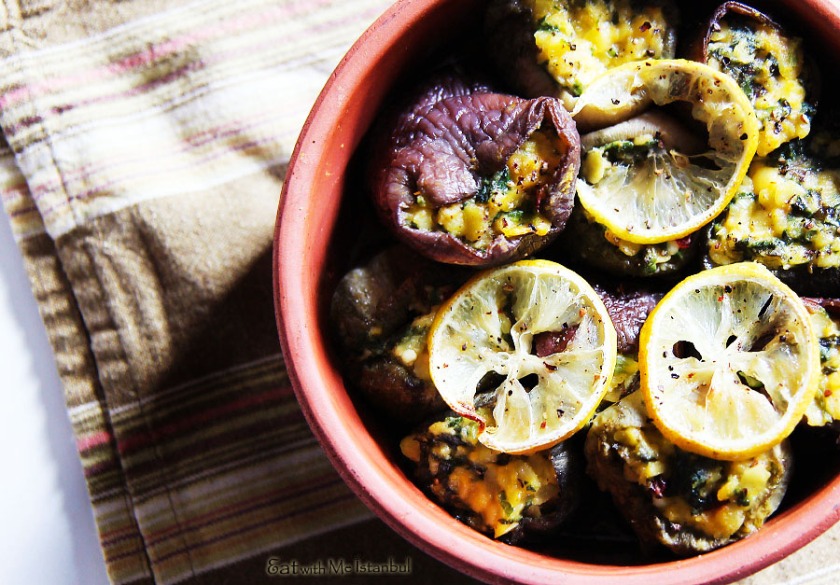 This time I made sure the vegetables were cooked through before stuffing and the flavours were more delicate; no chilies. These dolma dishes, though tasty, can bore you a bit after a while as they’re all the same in every restaurant, based on rice, tomatoes, sumac and all spice (yenibahar), no matter which vegetable is stuffed. We need varieties, don’t we? Especially, after eating zucchini dolma that tastes like midiye (mussel) dolma but didn’t have mussels in a restaurant, Mr.O was convinced that all spice seemed to be reponsible and it needed a change of the taste.

So I created a modern version of it, which contains lentil, spinach and sheep feta, then are flavoured with mint and caraway seeds. Uh huh, sounds interessant? YES, it not only sounds interesting but tasted amazing. As for the type of lentil, I’d go for small green lentils instead of yellow since they hold the shape better. I just happened to have cooked yellow lentils so I used them up.

I also know that these dried vegetables are not easy to get hold of if you don’t live in this part of the world, and in that case, you can use fresh, eggplants, zucchini and capsicums and hollow them out, in which way you can skip the time for soaking and boiling. This step is well-demonstrated on Food Safari, which I used to watch every week.

I added some pomegranate seeds into the stuffing but you can add cranberries or even raisins. I didn’t add garlic as I wanted a clean and delicate taste, so when they came out of the oven, I added a bit of liquid from the clay pot into a sauce pan and a dollop of butter and rosehip jam, and a whole garlic clove stabbed 2-3 times with a knife to infuse only the aroma. 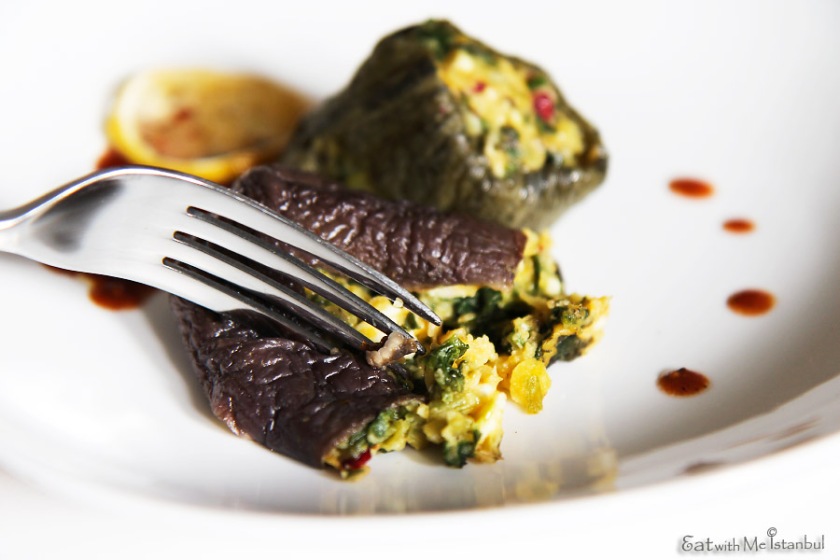 What a treat it was! This recipe is definitely a keeper. Mr.O gave me two thumps up and told me to make up for the first failure with this at the next dinner at his parents’.

For more ideas for stuffed vegetables, you can check on La Tartine Gourmande and peperoni ripieni with bulgur&tuna fish (Bread and Companatico) and Taste of Beruit.

1. Soak the dried vegetables in hot water for 2 hours and boil for 30 mins until soft.
2. While waiting, prepare the stuffing by mixing all the ingredients and taste for seasoning.
3. Drain the vegetables and stuff them.
4. Place them in a deep round baking dish and garnish with lemon slices. Bake for 30 mins.

NB: You can replace lentils with bulgur, quinoa or barley and of course, skip the sauce or create your own but something fruity and light. Alternatively, you can bake or boil the stuffed vegetables on the bed of sliced tomatoes and garlic, which will naturally turn into sauce.