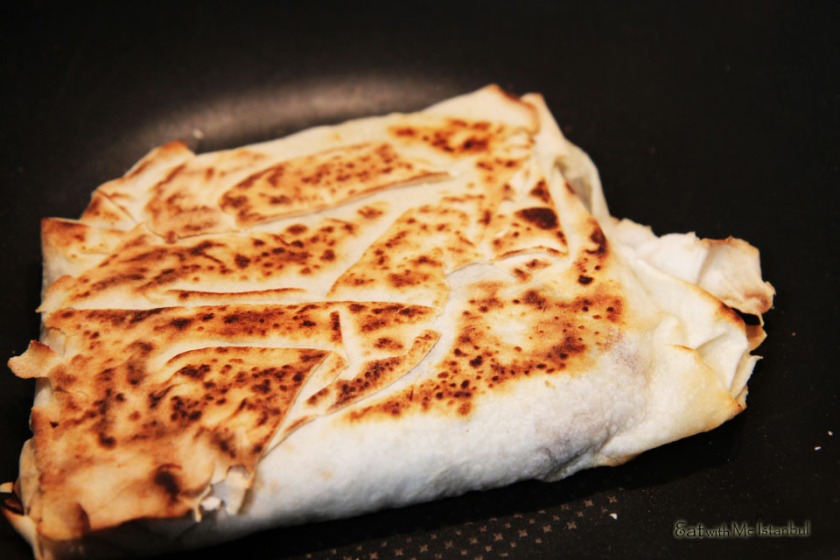 Now it’s no joke any more. I haven’t been able to go grocery shopping for two weeks now because of the constant supply of zucchini. we moved in to a new flat – congratulations! – and I’ve been enjoying my new place and new neighbourhood, where our close foodie friend lives. Mr.O and I keep turning up at his apartment unaccounted and I think he will be annoyed soon and move out eventually. I don’t know why but here in Turkey when people move house, they take ceiling lights with them, so reconnecting lights is one big job to do, yet, my dear man and many men nowadays don’t know how to fix the lights. So Mr.O’s dad was called in and he brought these lovely home-grown foods as well as olives from Çanakkale to our new flat.

I was so glad to have finished all the zucchini then but now I got even bigger ones and Mr.O was grinning at me, saying “I love zucchini!“, and I was at a loss. Ok, there begins the real war with zucchini. Let’s see who wins. 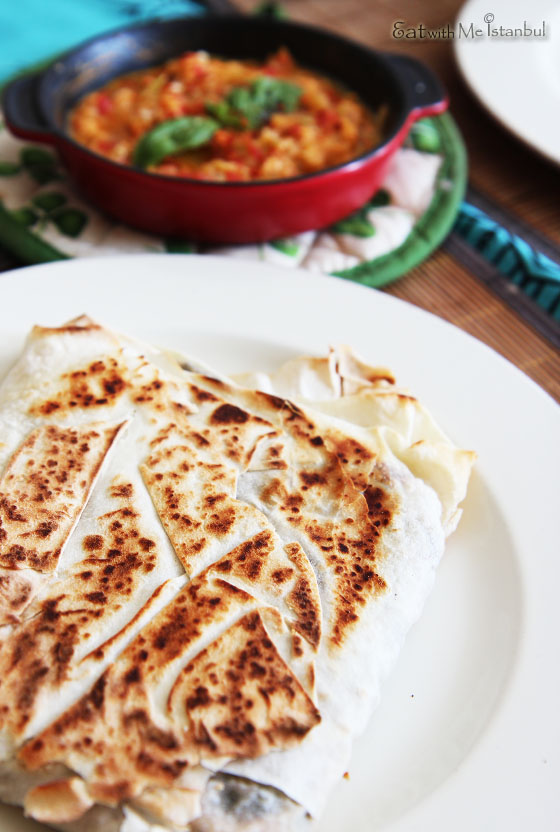 First, I made gözeleme, which is my all time favourite ever since my first encounter in Sydney where it appears as one of stall foods at every festival. Of course, it’s so much better and addictive that I can never get tired of it. What makes good gözeleme, the dough or the filling? Well, the freshness, right off the hot griddle, and the filling.  Yufka, which is known as filo or phylllo or brik pastry, etc. in many other countries, is one of the best culinary inventions in history along with noodles. Would you agree? This amazing artistry is supposed to have been mastered by Ottoman palace chefs and turned into a national specialty that is enjoyed throughout the country. Every block has at least one yufka shop and you can buy freshly made sheets any time. It’s so versatile that you can come up with hundreds of ideas with it. Still, after all this time, I’m still mesmerized by women rolling the dough so thin like a breeze. At the moment, I don’t need to add one more thing to learn but one day I wish to master it like puff pastry.

While browsing for yufka ideas, I came across a blog of this yufka master, and as you can see, there are so MANY ways to turn this thin sheets into art. You don’t need to know Turkish to pick up ideas; you can just scroll down looking at the photos. You might find some interesting ideas that you’ve never thought of.

If I’m allowed, I can eat nothing but this, filling the sheet with different things everyday, though it’ll be very lazy of me. Would it really? Grated one big zucchini was cooked with onion and black olives and later mixed with feta cheese. I like generous filling and, to be honest, I liked my zucchini gözeleme more than the famous gözeleme cafe in Rumelihisari. We used to hold a gözeleme party and, just like a pizza party or dumpling party, it’s a lot of fun, people making different fillings of their choice. One of the most popular fillings has been mushroom and blue cheese, besides the forever champion, spinach and cheese. This zucchini combo was also very good. 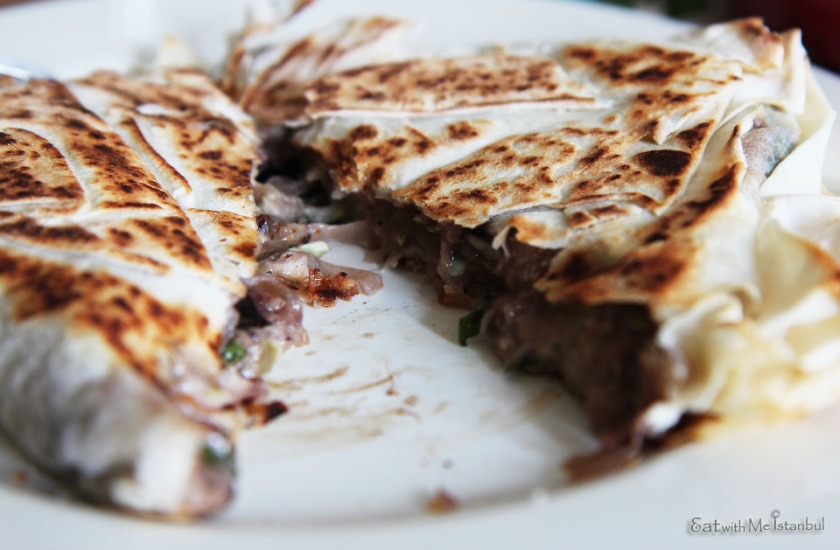 What I think is a crime is to mess up this delicious food with Nutella, which happens in many touristic places, trying to copy French crepe, but in my opinion as well as others, it’s rather disgraceful and distasteful adaptation. What do you think about that, if you’ve ever tried a sweet gözeleme?

Since it was a brunch, I tweaked another Turkish breakfast item, menemen. Zucchini menemen….it might be a bit of challenge to imagine, right?

How about a bit of tomato and chorizo, with some paprika? I wouldn’t say it was really good. There was something missing but I couldn’t figure out exactly what. Perhaps, I need to try this again to know. 🙂 Maybe It isn’t worth a second try? Yeah… no…I won’t try it again. It looks nice, though. What people write on blogs can’t be always positive and I’m being honest here.

Menemen is another Turkish dish that I don’t mind eating everyday, making different variations each time. Do you remember my turmeric menemen? The cafe I mentioned, Nar, actually makes good menemen by the way, if my memory serves well. You know what? I know what I’ll do next time. I’m going to make a menemen gözeleme! 🙂

So now one big zucchini to go…… are you already looking forward to zucchini series #3?