How lucky am I to have all the lovely people around who make a little mouse “me” – feel cared for and happy. On the day of Candy Feast or Şeker Bayram in Turkish, this holy gracious amaretto liqueur was served to us by Mr.O’s parents, along with the best almonds and almond paste.

Surprised by this unexpected treat, I bugged Mr.O again with questions related to this Turkish amaretto. Perhaps, the reason Mr.O is losing weight despite all the food he eats with me is to be interrogated about food and food history. Anyway, what a treat it was! This is  one of the reason I love Mr.O’s dad so much; he reads my culinary mind perfectly. 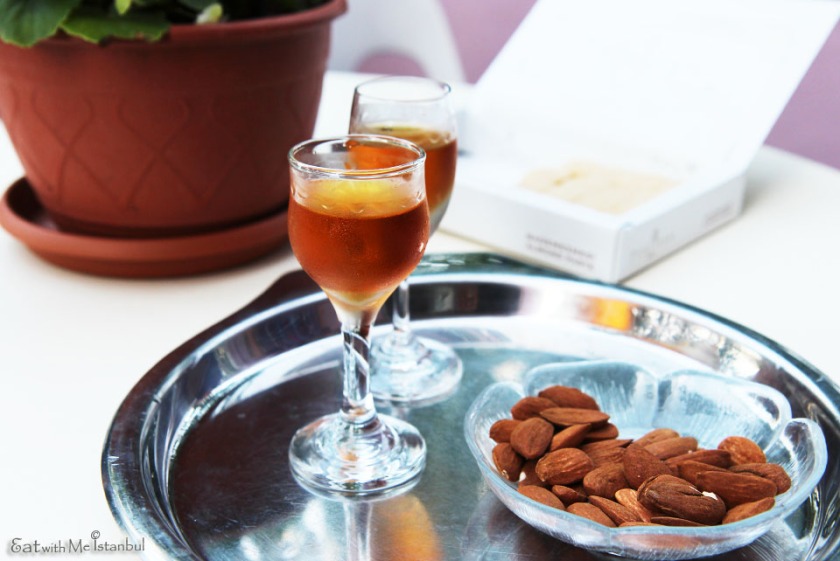 And we left with more zucchini….and you know what will happen, right? This series will never have an ending.

Kids, whether they are 10 year olds or 30 year olds, are equally treated with sweet things during this festival. After a lovely meal, we made a visit to the oldest in the family, Mr.O’s aunt. We tend to get into an argument when picking desserts because I don’t really like Turkish desserts with syrup. This time Mr.O got proactive and spoke firmly that we were just going to pick whatever is there on the way to his aunt’s, whether I like it or not. There was a baklava shop displaying ‘Gaziantep‘ and we pulled over and had a look at an array of baklavas. They looked pretty fresh and not sickly sweet so we bought a box.

We arrived at the Big Aunt’s and, nudged forward by Mr.O to do the greeting of respect first unexpected, not only did I make a fool of myself but also embarrassed Mr.O. How? Well, I was so nervous, – this is when my Asian side comes out. The elders frighten me –  I kissed her hand and put it on her forehead instead of mine. Got the picture? I was supposed to put her kissed hand to my forehead! After Mr.O gave his respect, I said I wanted to do it again, but the Big Aunt waved it off and gave me a candy instead, and the holy lemon cologne, which is another Turkish culture people have a mixed feeling about.

After a chit chat, we proceed to a brunch, and to my shock, it included zucchini. She said that Mr.O’s dad told we loved zucchini so much. WHAT? There must be a conspiracy trying to overfeed me with zucchini. By the way, she is the person behind Mr.O’s dad amazing cooking talent. So I thought to myself, “I wouldn’t mind being overloaded with zucchini and oil as long as it’s made by the greatest cook.” 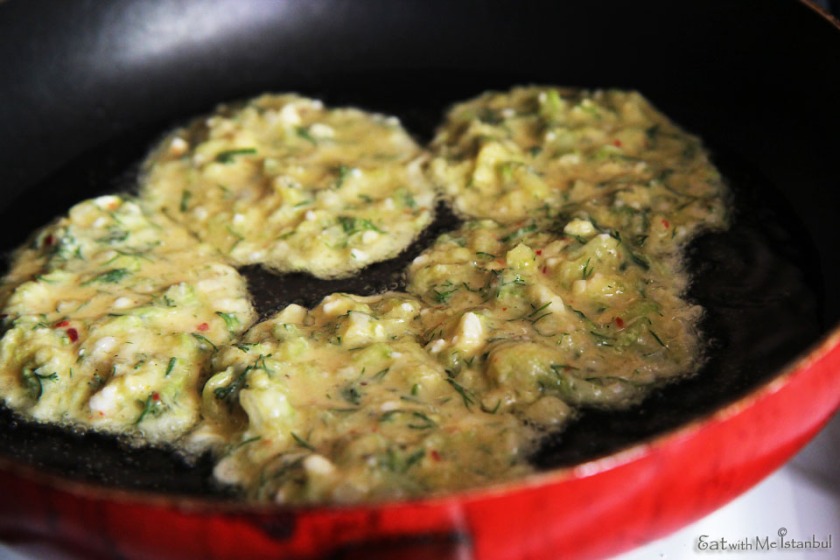 Mr.O also chipped in here and asked her to use less oil in frying, and I said to his surprise, “No, no, zucchini fritters are delicious when fried in lots of oil. You never bake fritters!” and winked at him. They were delicious and I ate more than I needed to, to show my respect for the greatest cook.

Now here comes the dessert. I was sweating as she opened the box and served, not just one but two pieces of baklava. When the Big Aunt went into the kitchen for a second, I pressed down the top of one baklava with the back of the fork, showing the syrup oozing out from the bottom, and I grinned at Mr.O and put the whole baklava into my mouth. Oh, la la, this is what a Heaven must feel like….being sarcastic.

I am dying to taste a real good baklava that holds the heart of the Turks. This baklava had nice crispy and flaky layers at least. Sorry I can’t speak of baklava the way travel books say, how you must try them, and so on.

Being Korean has some perks in Turkey. I get photographed by young K-pop fans and even get a free ride on public transportation in return for a photograph when I forget my bus card. They always refuse to take money from me, saying “Hayatta olmaz”, which means “No way“. It touches my heart when I see humanity still existing in this world. 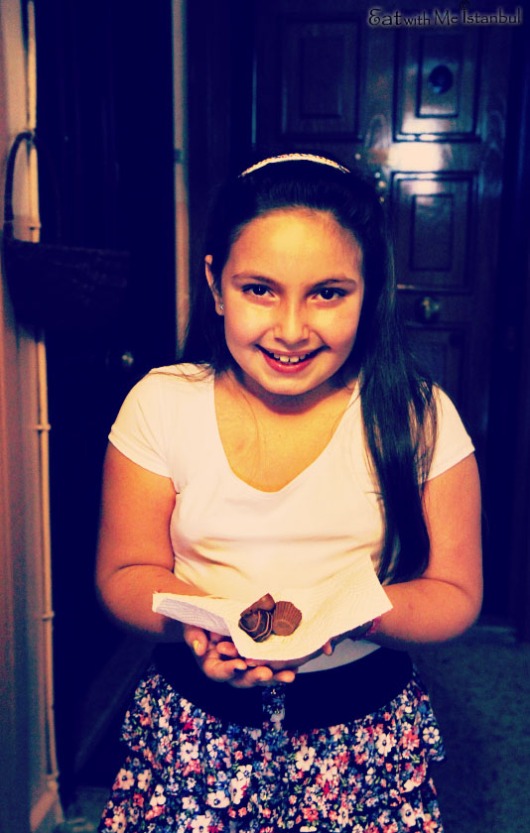 The door bell rang one morning and when I opened the door, I was surprised to see a lovely smiling girl in a lovely flowery skirt. What does this little girl have business with me? We stood there exchanging smiles and she finally explained to my confused face, which unit she’s from, what her name is, why she is here. Alas, Şeker Bayram! I completely forgot about it. I thought it was only one-day thing.

Gosh, “Hang on, kiddo, let me see what I have in the pantry. I don’t keep sweets in the house.”

All said in Turkish by the way, which Mr.O was impressed by and still doesn’t believe.

Well, I couldn’t find any sweets as usual. I couldn’t give her my healthy but disastrous flaxseed macarons or coconut banana bread, could I? Ah ha! I spotted the box of Irish creamy chocolate! There you have them all! Even after taking the chocolates, she was still lingering there. “What else do you want, kiddo?”

“My mum said that there was an Asian living in this building and I wanted to see if you really have slanted eyes.”, pressing up the edges of her eyes with her index fingers.

Oh well, I suddenly felt like being a celebrity.

Now let me get back to my zucchini business. 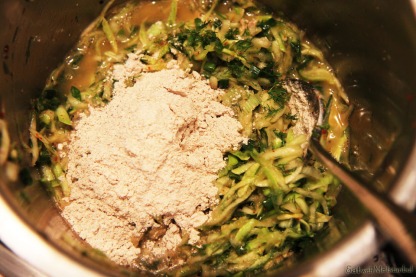 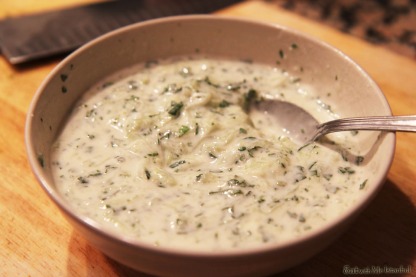 While I was still on the memory of the Turkish zucchini fritters, mücver , I decided to recreate it in my own version by combining the Asian and the European technique. Koreans eat a lot of pancakes made with zucchini and traditionally buckwheat was popular for pancakes, which I love. Especially, dishes made with buckwheat are eaten in the summer time as it is believed to cool down the body temperature. Oh, how I miss the cold buckwheat noodles! 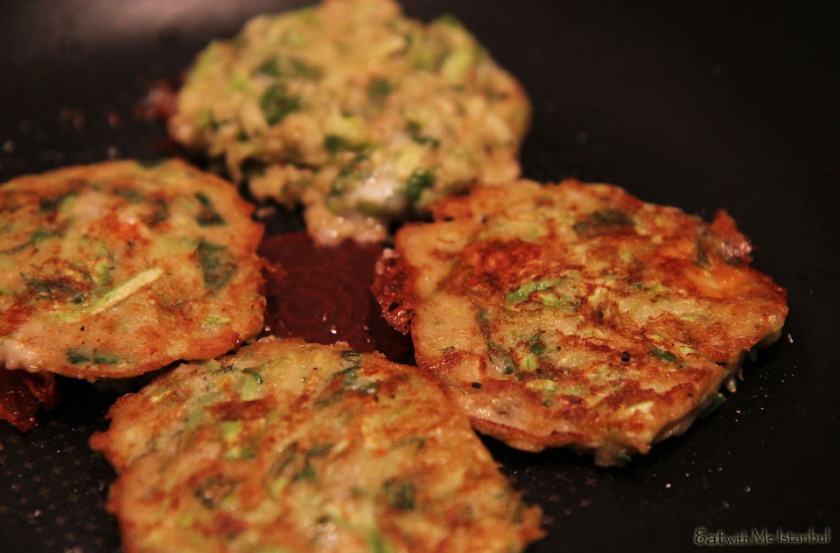 I also made cacik, the cold cucumber mint yogurt meze, as I was given 6 big fat cucumbers on that day. I’m sure Mr.O was very impressed by my hidden cooking skills for Turkish food. He liked my zucchini fritters so much that he wanted more, so I asked HIM to make the second round and he did. So proud of himself, he immediately loaded up his photo on Whatsapp.

Well, when he came back with the last batch, I had to laugh because he turned it into one big pancake, wanting to finish it off in one go. But we couldn’t eat them all and saved the pancake for the next day. The secret of delicious fritters is the fresh herbs, dill in mine, and the mixture of spices, chili flakes and cumin, and perhaps corn starch. Do you use corn starch for your fritters? I tend to do it subconsciously because my mum did. It seems to give a firm texture and crispy edges. 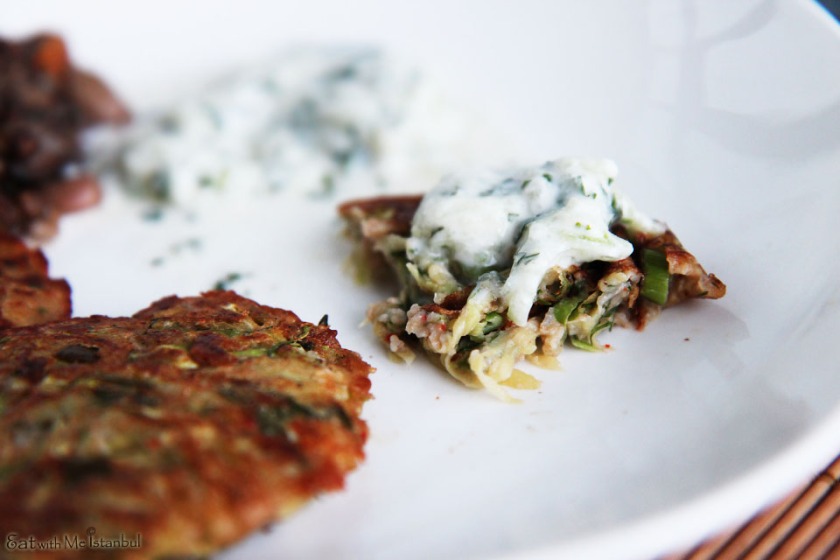 It was a nice vegetarian feast, with fritters, cacik and the leftover lentil dish. Buckwheat has a cooling effect so is especially good for summer. Soba or the Korean delicious buckwheat cold noodles….I miss it so much. Oh, life feels sweet without sweets…..

1. First, salt the grated zucchini for 5-10mins and squeeze out as much liquid as possible – so this way you can reduce the amount of flour.
2. Mix all the ingredients together and adjust the consistency by adding more flour or liquid, in my case, ayran rather than water when available.
3. Spoon the mixture and drop into the heated pan with oil.
4. Cook for 4-5 mins each side, turning over to check if browned nicely.
5. Serve with cacik or mint yogurt