As you might have read, I went on a guerrilla trip from Istanbul to Bodrum, joining Mr.O’s relatives and friends along the way. When we were coming back to Istanbul, we brought some Aegean foods with us.

The things I always pick up at the roadside stalls are tomatoes, melons and watermelons, for which  Canakkale is renowned, while we snack on fresh figs and other fruit close to Izmir while driving. I love a road trip in late August because of the lush landscapes and the sight of fresh food stalls at village markets. I will share photos from a market in Bodrum in another post later.

Also, I always look forward to tasting ice cream in Canakkale and Assos, where you can taste the best ice cream in Turkey, which is a slightly different or improved version in my opinion, so fresh and not so sweet.

In case you are new to my blog, I can link you to the eternal place in my heart, Assos and how it is the reason I fell in love with Turkey. Our initial plan was to go to Assos again – for some reason, I always want to go there even though I’ve already visited there over 4 times – but Mr.O’s parents convinced us to go to Babakale for its octopus and beaches. The place isn’t so special except that it is the most westerly point in Turkey and the Asian continent. 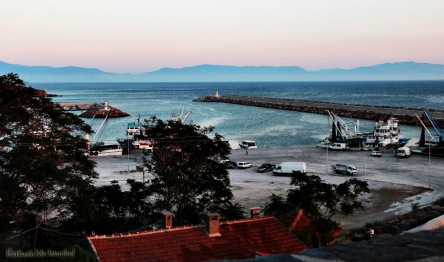 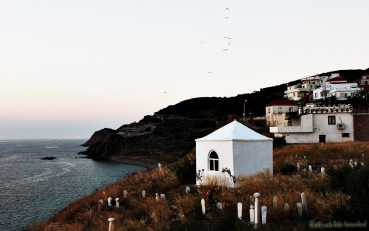 You can see Mytilini or Lesbos so close that you feel tempted to swim across and eat some nice octopus and prawns and back. The water was very calm and clear and I had a great time swimming and snorkelling.

Upon hearing about the famous knives made here for generations since 1700, I ordered one for Mr.O to put beside my Opinel knife. These hand-made knives take 2-3 months to be complete and delivered. Surprised? I’ll share its photo when it arrives.

Mr.Efes, whose chef wife claims the ice cream shop in Ayvalik as the best, admitted immediately after tasting the Canakkale ice cream that it was the best. Aegean villages are full of seasonal fruit and wild berries, which turn into ice cream and we ate ice cream every day and night. I have fond memories of the decadent blueberry and mulberry ice cream in Babakale and melon and lemon ice cream in Canakkale as well as the best fish dishes in Ayvalik and manti (Turkish ravioli) in Adatepe, and zucchini flower and borek in Bodrum. I’ll skip photos of the cheese helva and other foods as you can find them on my FB page.

So it’s about Turkish Ice Cream! One day when I cut one of the melons to eat, I found that it was too ripe to eat, though Mr.O says it’s never TOO ripe because it gets sweeter. But it was overripe by my definition, and as I was still lingering on the memory of the melon ice cream I ate in Canakkale at that time, I thought ” Why not make ice cream?”

But do you think I’d have an ice cream maker when I don’t even have a pasta or bread maker? 🙂 So I had to make ice cream without a machine and it worked alright, I mean, it did for my purpose. I wanted to eat a nice cold summer treat and also to experiment with the salep I got for the cheesecake. So this ice cream is a kind of Turkish style, well, I dare tried it out, and also it’s slightly Greek because it’s got yogurt in it. So it’s something between sorbet and ice cream.

As I had to churn it by hand for several hours, I couldn’t attend a dinner at Mr.O’s friend’s and they were so curious whether the ice cream was worthwhile to miss the rare fish dinner party. The ice cream was good but the problem was that I was in such a rush to serve that I forgot to take the ice cream cups off the tray!! So please excuse this muddled background, which isn’t complimenting my fabulous Turkish Melon Cardamom Ice Cream at all. 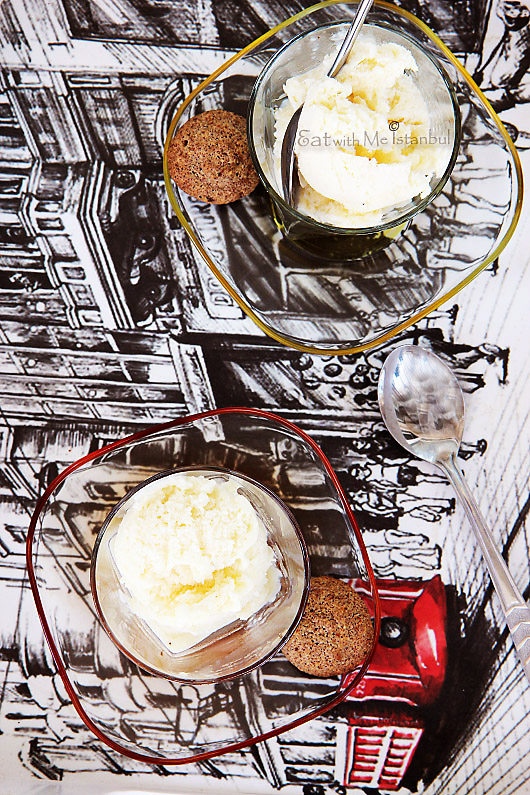 Oh, well… while taking photos, the ice cream is melting away. I’ll have another go with this recipe when I’m past this chaotic period but it is still good because it’s fresh, homemade, healthy, refreshing, and above all, I saved the melon that had traveled 504 km. At first, I was thinking of making ice cream pops, which are easier. But as I like to challenge, I decided to improvise a little. 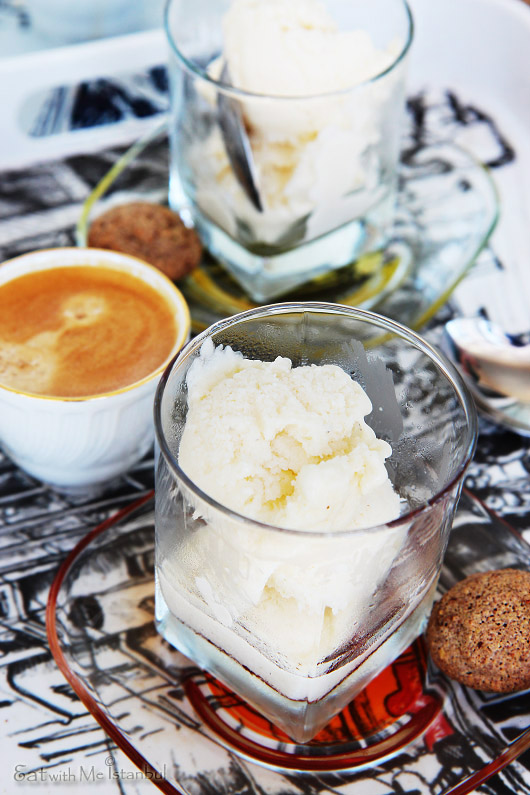 Bye bye Canakkale until next year….. but the taste of sweet melons is here for longer. When visiting Mr.O’s relatives, I usually decline to have lemon cologne sprayed on my hands but this time I couldn’t refuse because this sweet little princess wanted to bless me with the magic portion.

This recipe is inspired by Homemade Melon Ice Cream without an Ice Cream Maker by Carissa Byer, which doesn’t include Turkish salep or mastic, so if you feel safer without it, you can try her original recipe. Either way, I hope it is a good reminder that ice cream can be made without a machine.

1. Puree the melon in a food processor.
2. Put the mastic lokum in a small pot with a little of the melon puree and boil over low heat to melt.
3. Add the salep into the mastic mixture and the honey to make  smooth paste.
4. Mix it with the cream, yogurt and melon puree, and cardamom in a freeze proof container and beat well using a hand mixer.
5. Put it in the freezer and take it out after 30-40 mins just when it starts to freeze around the edges and stir vigorously with a whisk or a hand mixer (high-tech).
6. Keep checking and stirring periodically, say every 30 mins, for 2-3 hours until it’s set.

Does the stirring sound exhausting? It is not, since it was my choice to go low tech and I was rather excited about the result.