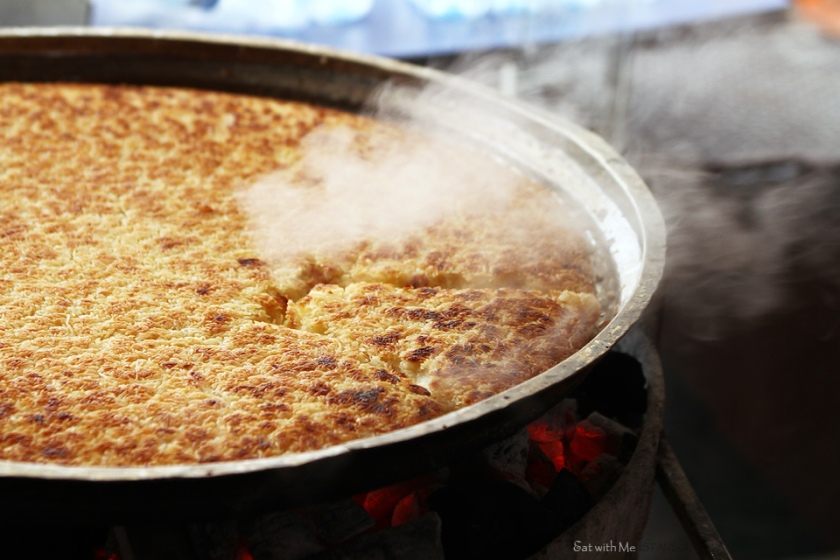 I’m writing this while munching on za’atar chips I made using the spices I brought from Antakya in Hatay province in the south of Turkey near the Syrian border. Mr.O and I were not sure where we were going right up to the moment we landed at Hatay airport, me going “I wanted to go to Antakya, not Hatay, because there’s no food except Kunefe in Hatay!” and Mr.O going “You booked the ticket, not me, well, we are here now, so….” We totally sound like two naive tourists, don’t we? In our defense, the name of the city is quite confusing as is the history of this city, which is better known as ‘Antioch‘ by many, especially Christian pilgrims. There is even a Korean protestant church there, which was founded in 2000, and Mr.O said, “Let’s visit and say hi to practice my Korean!”, but we didn’t go. All I want was food. 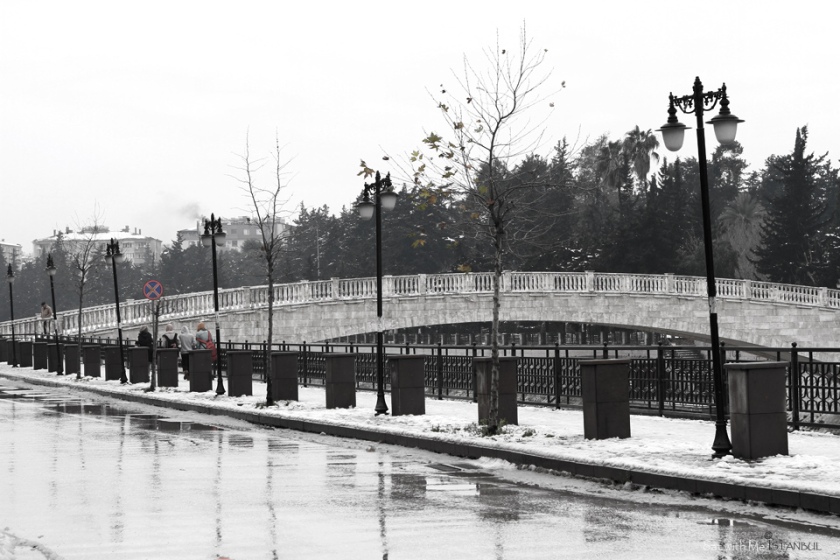 I couldn’t shake off the guilt for having convinced Mr.O to come with me by saying that the weather forecast said it’d be over 15’C when Istanbul was experiencing the coldest days, because we were there on the coldest days when it had the first snow in 10 years. The whole town seemed deserted and we couldn’t find any cafes or restaurants that were open. Perhaps, it’s because it’s Sunday and they will open later, so we thought. We just walked around small streets and the more I walked, the more confused I felt. Where am I? The architecture of some of the buildings made me feel like I’m in an ancient Roman city but the language spoken by passers-by and shop keepers reminded me of an Arab city, and also there were reminders of the French colonial period such as mansions, cabarets, and signs.

Çankaya Hotel, the restored boutique hotel we stayed at was one of the examples. I was VERY pleased with everything about the hotel, the elegant design, the friendly staff(especially the ex-tour guide), the amenities and service. 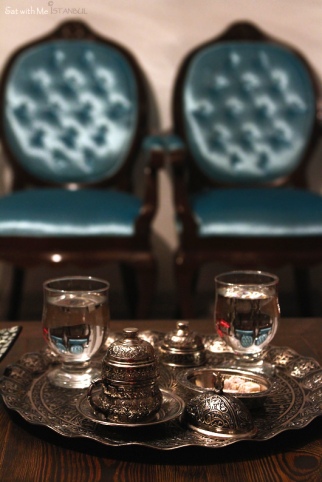 Above all, the location was excellent, set in the main street, known as the street of the erudite and rich, which, according to him, was the first torch-lit street in history and was paved with marble and lined with colonnades in Roman times. It was so interesting walking around the once-lavish-town, the capital of Seleucid Empire and an important centre for the early Christians.

Ok, however rich its history might be, we were desperate for breakfast, and the only place we could find food was at a bakery in the main covered market(Uzun Carsi), where we had Antakya simit, which you dip in salt and cumin, and it was really good when hot. We went there again the next day and tried the chili bread but it was too salty to enjoy it.

Then, we came into a sign, ‘Bakla ve Humus’ Well, let’s forget breakfast and eat it. The owner, who turned out to be quite a charming character, led us into the shop, scooped bakla out of the special pot and started mashing it with a wooden pestle while enthusiastically talking about his backgrounds including his life in Halep(Aleppo) and also the visit of Vedat Milor, a celebrity food critic. 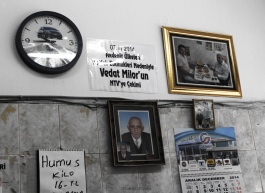 He forewarned us saying how heavy it is and how the locals love it so much that they always ask for more tahini. He told us a bizarre story of a Spanish chef, who couldn’t handle Turkish food and died of a heart attack; why is he telling us this when we were about to eat this nice local dish? I couldn’t make the connection at that time. Anyway, the chef turned out to be Jean Luc Figueras, the French chef who died while participating in ‘Mediterranean Culinary Day’ in Turkey.

He asked us for an honest opinion on his dish so that he can improve; I liked that. Bakla…it was delicious and we couldn’t finish it and explained to him that we were going to sample food all day, therefore we had to refrain ourselves. Almost full from bakla, we went back to the market again to see if more shops are open but it was as quiet as before, with a few more shops open, and then I got so excited to eyewitness the famous kadayif being made. Horray! Finally! My excitement soared up. 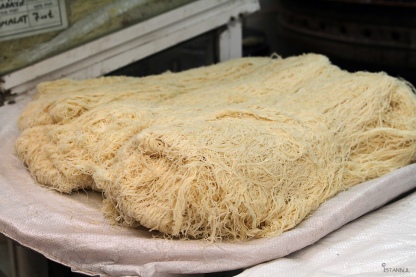 And then we got pulled into a courtyard by a ‘künefe’ sign and there it is, another infamous food, künefe!

I usually wince at the word, künefe just like baklava, because of my bad experiences and all that syrup but I gave my faith to the beloved dessert since I was in the town of künefe. With huge anticipation, we watched it being cooked slowly over the coal stove, being turned periodically, which was an interesting part. He explained that cooking over a fire in one corner and turning it around instead of a full-circle fire produces a better, evenly cooked künefe. Yes, it made sense. It takes about 15 mins to cook the whole pan, therefore you need patience. He also told us the künefe smuggling across the Syrian border that went on for a while, which I won’t share with you for a confidentiality issue. Now comes the highlight of flipping. I was getting my camera ready for continuous shooting but couldn’t figure it out in time and missed the shot of him flipping the whole künefe.

The first heavenly mouthful of this steamy künefe revealed its secret to me. It was so good that I asked for one more portion, making Mr.O’s eyes wide-open in shock. I indulged in the breakfast künefe, making up for all the bad experiences. Usually, in restaurants, cold syrup is poured over the hot künefe, which ruins the whole taste, not to mention the amount of the syrup. I asked for less syrup and the stretchy, gooey cheese, definitely a different type of cheese, which made all the difference in the taste. after tasting künefe in many other places there, I can say that Çınaraltı Künefe, is the winner hands down!

As it wasn’t much fun to walk around in the quiet and cold town, we decided to visit Iskenderun(Alexandretta), expecting it to be warmer being in a lower altitude and near the sea. Yes, we were right. As we were descending toward the town, sunshine warmed our faces and we immediately felt much cheerful. We took a stroll along the waterfront, drank coffee, but with the sight of industrial cranes and all, I didn’t really get good vibes, and also the streets were full of doner kebab shops. So we changed our mind about having dinner there and had some sweet treats at Petek Patisserie, which took me one-step closer to overcoming my baklava-phobia. My favourite was the one in a mussel shape, called ‘midye baklava‘ and my least favourite was the big triangle, whose uncooked pastry sheets and too much pistachio gave somewhat an unpleasant taste.

By the way, I’ll talk more about baklava in the next post because I learned something very important and interesting during this trip, which gave answers to the baklava myths that bothered me for a long time.

Back to Antakya, it seemed more lively in the evening, and we went to Anadolu Restaurant, which was recommended by a former Hatay resident as well as by the hotel and many others. Though I was more inclined to Sultan Sofrasi, it was closed(Sunday) and we had no other options. Well, I don’t really want to post the photos of the foods, which I didn’t enjoy but these are what we had. Local specialties were not available for some reason and when we said this to the people who had recommended this to us, they all seemed surprised and said that it might have changed hands. Later we learned that the owner had indeed changed…… Now there is no need to go to this place any more….the meat smelt and the menu had nothing special, nothing that you can’t find anywhere else. Kağıt kebab(local mince meat kebab meaning ‘paper’), fried eggplant in yogurt, hummus….

Luckily, the next place we stopped by cheered me up again and the delicious sorbet ice cream in Haytali syrup(rose water syrup) made my day. So did the interesting conversations with the congenial owner, who says his father learned how to make the ice cream in Syria and he improved the taste, which is just perfect, the way I like it. 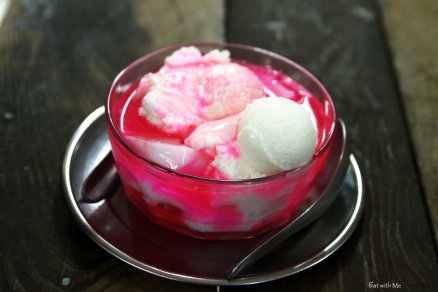 By this time, I was starting to like this historical and multicultural town, which seems to have an energy different to other Turkish cities. I went to bed that night, looking forward to visiting the mosaic museum, which was a bigger part of choosing Hatay over Adana, than künefe actually, but unexpected surprises were awaiting us the next day.