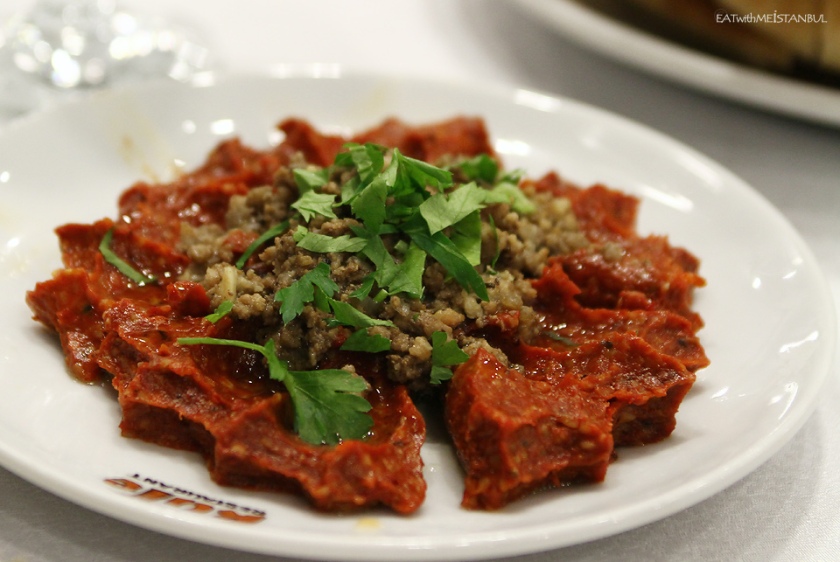 Here you go the second part of my Antakya food trip, where I got deeper into the town and food, but no luck with museums and churches. We got up the next day to find out that the archeological museum was closed along with all other museums… Yes, usually museums are closed on Mondays in Turkey and I knew that part, however, I was sure that I’d read ‘Closed on Sundays’ on the museum site. Was I dreaming? So disappointed at the finding and so annoyed by the cold weather, I lost my appetite for food. Take a deep breath…..calm down… Only the fact that the museum was under refurbishment in a new location and currently only half of the site is available to the public made me feel a little better. Alright, then, let’s just eat whatever we come across. I definitely needed food to cheer me up.

The cheese bread just outside the hotel was so so good, reminding us a bit of Georgian cheese bread. You must try it when you’re in Antakya and, the chocolate bread as well, and of course, the local specialty Sürk peynir, especially the mouldy one if you’re brave enough.

Since Hatay is a place where diverse ethnics live, I thought it might be a good opportunity to try authentic Armenian and Syrian food. So we went to a small cafe run by a woman of Armenian origin and had our first meal of the day there.

The woman was very bubbly and chatty so I asked all the questions regarding Turkish ethnic cuisines, which not many people would ask or even care about. I’m ‘an innocent abroad‘, full of curiosity. Seeing my enthusiasm, she phoned someone in the Armenian village in Samandağ and asked about the possibility of private home cooking but we were told that it’d be difficult for two people; fair enough. At least, now we know that it is possible so that will be yet another reason to come back to Hatay. The meal was typical kuru fasulye(bean stew), meat bread and pilav(rice), with a slight difference in each, for example, the beans were less cooked and the rice not drenched in oil and salt. The menu changes daily and she said she’d cook mumbar(stuffed lamb’s intestines) the next day, which I had at the Gaziantep food festival last year. 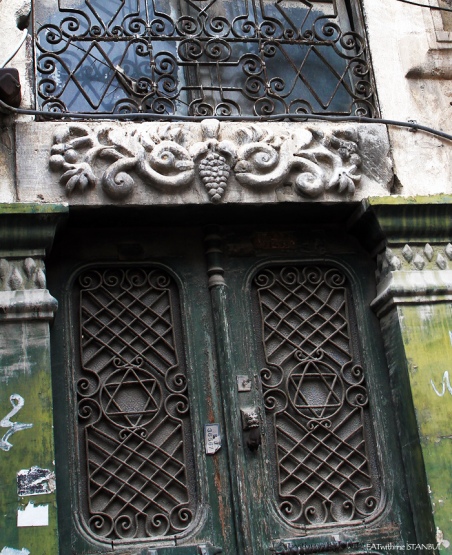 The atmosphere was a lot livelier than Sunday, with more people seen going about daily routines. We went back to the Catholic church but it was closed again – wrong hours this time. By the way, I noticed hand-shaped door knockers and, through googling, I learned that it symbolises the hand of Fatima Zahra, compassionate daughter of the Prophet, on Jewish homes, the hand of Miriam, sister to Moses and Aaron. Levantine Christians know it as ‘the hand of Mary’. Sometimes there are two hands, male and female, so that women can know by the sound whether the visitor is male or female. Very interesting….Mr.O says that these hand door knockers can be found in the Beyoğlu area, too, so I’ll look out for them when I’m there. 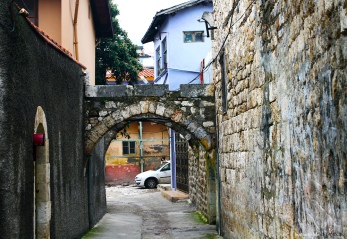 Another lovely sight was the orange trees adorning the streets, which instantly gives an exotic feel and also explains the aroma of orange blossom in the food. Now we set out for the famous St.Pierre Church, the world first cave church, and on the way we discovered many things. Because we had to pass through a sort of Syrian quater, we got to taste Syrian foods, baklava on the way up, falafel on the way down. I ate a lot of baklava on this trip and discovered some secrets of baklava. Wood burning stoves seemed to be a common heating system here and you can drink tap water!

The falafel surprised us a lot, first by the taste, so light and crunchy unlike the usual falafel I’d eaten, probably because of the hole in the middle, and second, by the price. It was only 2tl!!!!! You can fill yourself up with 2tl here, can you imagine it? It’d be just 1tl without the veggies and I can eat it everyday. Oh, my….

It is common here for people to take dishes to a bakery for cooking; the idea of a communal oven still exists here and I really liked that. Do you remember ‘Best way to grill eggplants‘? It just proved it by itself. We made it to the church but it was again closed, and there was a little kid at the church gate, who was giving guides for pocket money, which I think is a lot better than begging. The two Turkish guys who used his service said he was really good and told us to go up to what is believed to be the statue of Charon or Haron, the name they call here, but we didn’t bother due to the mud and the cold. In the photo, you can see Hilton Hotel being built right over the site of Roman mosaics, which will be protected in glass; a guy from the shop opposite the hotel told us. I felt that many people liked to tell us secrets here. 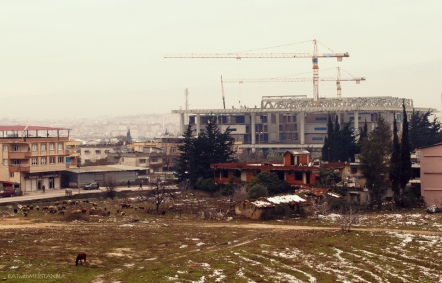 The view from the hill seems to depict the colourful life of the locals of different faiths, different languages, different ethnics… It’s quite an enchanting city, I thought to myself. Though it looks run down and shabby, every street has a history and everyone has a story to tell, and I just loved it.

We walked back to the main centre, through another street with a fish market where I saw a lot of river fish. We walked everywhere to burn calories just to eat more. Uzun Carsi was very crowded by then and we did our last minute food shopping at a spice shop, hatay chilli, za’atar(zahter), fresh turmeric, fennel seeds, chickpea powder, etc., and pomegranate molasses, which took me by surprise with its pure and quintessential taste. The guy said many commercial pomegranate syrup or molasses contains added lemon or citric acid, let alone sugar, glucose, colouring, etc. So when I got back home, I tasted the pomegranate molasses in my kitchen and threw it away. It tasted so so different and fake, though it said 100% pure concentrate on the label… 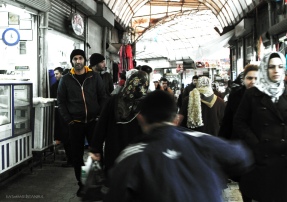 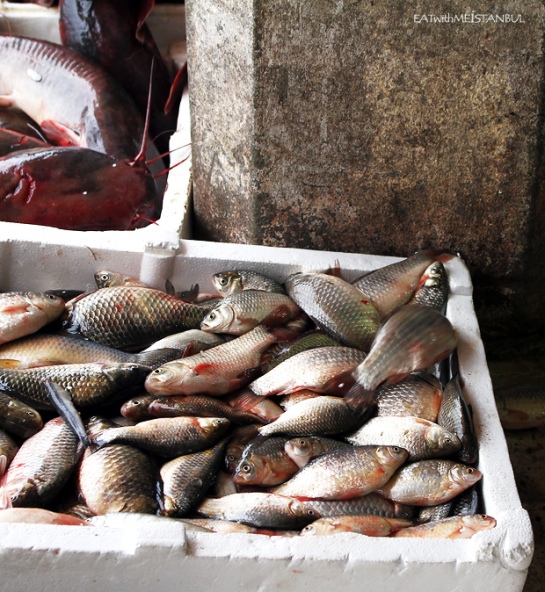 Can you see the white thing that looks like meringue? It was my first time seeing such a thing and it’s NOT made of egg whites but with çöven, known as Gypsophila, and how it’s made (see only photos) is very interesting. The shop owner said that people eat it with bread and I was curious about the taste. We went back to the hotel to drop off our shopping bags before heading to Harbiye for our last dinner, and on the way, we stopped by a baklava shop for our confirmatory bite. It seems like I ate my yearly portion of baklava on this trip. The Syrian guy in the shop kept giving us samples and, as he seemed like a really genuine, good-hearted guy, we officially ordered a few and discussed about the difference between Syrian and Turkish baklava. As his Turkish was not good, we got help from Google translator.

It was getting more and more clear by now that the Turkish baklava has more syrup and heavier. He confirmed it by pointing to the syrup bottle, which is there for Turkish people, who usually like more syrup in baklava. Another thing I found is that Syrian baklava has a floral scent from orange blossom or rose water, which I like but I know some people don’t. Turkish baklava, on the other hand, has kaymak (clotted cream), which makes it even heavier, and for that reason, I don’t like Karaköy Güllüoğlu baklava, whose kaymak taste is too overpowering. We both preferred the Syrian baklava that keeps the crispiness of the pastry without the syrup sticking all that delicate layers.

When we were about to pay, he said, with his hand over his heart, “It’s free.” Mr.O and I exchanged our glance and shouted in chorus, “No way! We ate a lot and we must pay.” So we agreed on 5tl and left the shop, and outside the shop, we were still in disbelief, saying “What, 5tl for 7 or 8 pieces?” This city is insanely addictive!

So, now, we finally got to the much-talked of Kule Restaurant in Harbiye, where the pretty waterfall is. Many people said that their mezes are really good but well…besides the real raw meatballs(çig kofte) and the thyme olive salad, there wasn’t anything special. Seeing tabbouleh on the menu, I got excited but got told by the polite waiter that Turks don’t know how to make it good so he didn’t recommend it. Oruk kofte wasn’t good – Mr.O said it before I did for a change. Tepsi kebab…well, good, much better and less smelly than Anadolu restaurant, but it again had that annoying mutton smell… Am I just too sensitive to the smell? Anyway, the staff were very friendly and helpful even with such picky guests like us. And finally about the popular kunefe…. I don’t know what to say… it wasn’t cheesy enough for me and the kadayif used was different, drier and crispier, which usually requires a lot of syrup, but since I ordered the syrup separately, it didn’t wow me as much as at Çinaralti Kunefe. 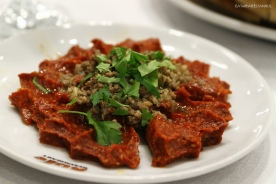 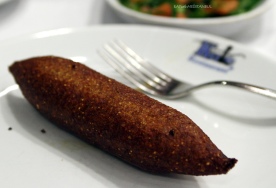 The restaurant might be an entertainment place for locals since it’s a long way from Antakya and has a nice view of the valley from the hill, which we didn’t get to see. Having said all that, these words are coming from someone who already knows Turkish food, so for tourists, everything they taste can be interesting and wonder—-ful. I’m not biased, neither am I writing to please anyone, but at least, you know now that the differences that no one has ever told you about, and I think when it comes to Turkish food, how to eat is more important than what to eat. I hope that my posts about Antakya were helpful in any ways. If they weren’t, here are more articles you might like to read.

http://www.cukurcumatimes.com/2012/07/antakya-lezzet-turu-1.html (sorry, it’s in Turkish, but photos tell you everything!)