Sorry readers for the long absence. So many thing have happened in the last two weeks and I don’t know which one to write about first. So let me write about the latest event first, The Korean New Year Feast, which I feel like is the best achievement in my years in Istanbul. I haven’t fully recovered from the chaotic weekend of shopping and cooking as I’ve had a full working week right after. As I was writing this, my sister sent me this photo of the whole family celebrating the lunar new year with giant oysters and pork BBQ, with a note that my dad made these wooden stools. They’ve been feasting for three days now and yesterday was marinated beef rib BBQ, Galbi. I can see how the table offered to the ancestors is getting simplified each year. When I was growing up, it was three times the size of this and took the whole family to cook but nowadays people only prepare dishes they actually enjoy instead of following the book of customs. Also, to many modern families, this big holiday means time to ‘leave’ not ‘gather, as they prefer to go on a holiday overseas. 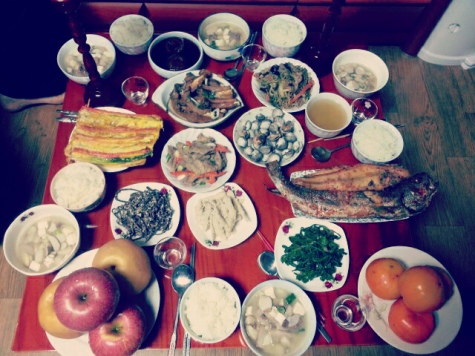 As some of my readers may know, I organised a foodie gathering for Korean New Year Feast. As an old habit, I couldn’t pass the occasion without having the chance to exhibit my Asian background. The event was initially planned as a casual lunch with a small number of people who are interested in Korean food. But as soon as I posted it on one of the expat FB group, many people responded with such enthusiasm and the guest list was getting longer and longer by day.

And a totally unexpected opportunity came along, thanks to Gökçen Ceylan, the man of many talents and charisma, who is behind The Gourmet Holidays, and I was able to host it at Bahane Lounge, a chic modern bar set in an old Ottoman mansion. I was so excited to hold my first public event in such a nice place and so were the guests who craved authentic ethnic food. After announcing the final guest list, it all became real. The countdown finally kicked off and I went on a spree of hunting down ingredients. It took me days to find all the necessary items, and days to prepare some foods that aren’t available. 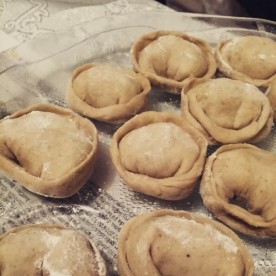 When I sent my family and friends the photos of the rice cake and pickled radish, they reacted in shock. Who makes those things at home these days? Well, I do. I was especially proud of my homemade danmuji, which is 100% free of chemicals and artificial colouring. Also, the dumplings were the northern style using buckwheat dough, turkey meat, kimchi and tofu.

The biggest challenge was carrying all the prepared foods to the bar on the morning of the event, to be honest. Mr.O and I made several trips up and down flights of stairs and packed all the prepared foods and other stuff into the back of the car and managed to arrive at the bar just in time. I prepared all the main dishes beforehand but the appetizers were to be made on the site and I was sure I could handle it without any problem. It’s always awkward and difficult to cook in the kitchen you’re not used to. I’m very grateful to the chef, Erdem, who patiently guided us through. Who says chefs have a short temper? He’s the gentlest chef I’ve met. Cooking in a commercial kitchen was a whole lot difference experience as the pots and pans are bigger and heavier than me, but the knives….oh yeah…. 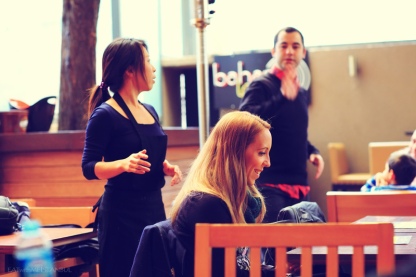 Ok, 30 guests…. the number didn’t scare me as much as some might think. First, I was trained as a kitchen hand in my mum’s restaurant as a teenager so I knew what it’s like to cook for many people at once. Second, I used to throw foodie parties for a big crowd in my prime time in Sydney and was once awarded with ‘Best Smile&Service Staff’ by a secret marketing agency. So the night before the big day, I went to bed, rehearsing the event in my head, mainly the good parts but…. not the odds. 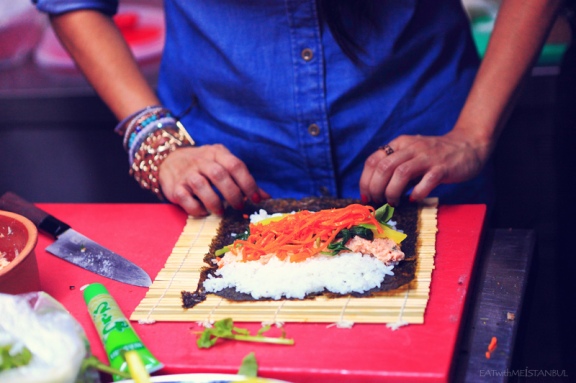 So in reality, it wasn’t as smooth as I’d planned it to be as some factors went awry. The kimbap and dumplings took a lot longer, to start with. Seeing the guests’ enthusiasm of having a go at making kimbap, I showed some guests how to make it and let them make their own. 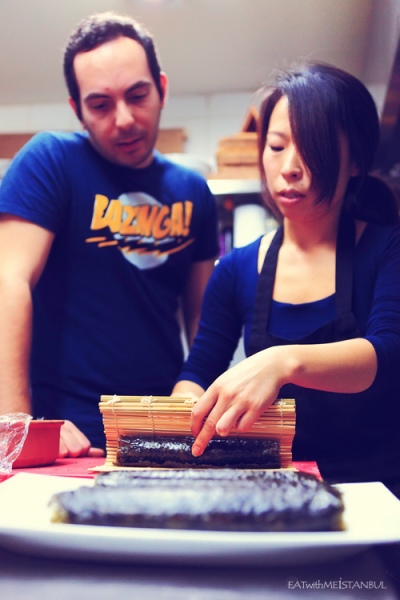 My teacher’s blood kicked in right then, oh well. Although we all had so much fun, we didn’t realise how much time it had taken away. The new year’s soup(ddeokguk) was boiling away while we were losing ourselves in making kimbap. Originally, in kimbap, tuna is used but as I was reluctant to buy canned food, I replaced it with freshly cooked salmon and mixed it with homemade mayonnaise as I would not serve the food that I don’t eat. 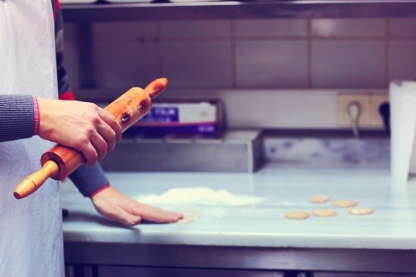 Anyway, by now the quality and the look wasn’t important any more and I had to speed up the process and skip the soup in order to finish all the cooking before the hungry guests decide to eat me alive. Bulgogi(thin beef marinated in pear and soy sauce, Dakgalbi(spicy chicken stir-fry), and Osam bulgogi(squid and pork bbq – I made a long journey to hunt down pork meat), were served in order. The dumplings, which Mr.O was making all morning, were also in high demand and I was glad that guests willingly gave a helping hand. As Mr.O and I continued to cook away to make sure all the guests ate a bit of everything, it all seemed like a battle field. 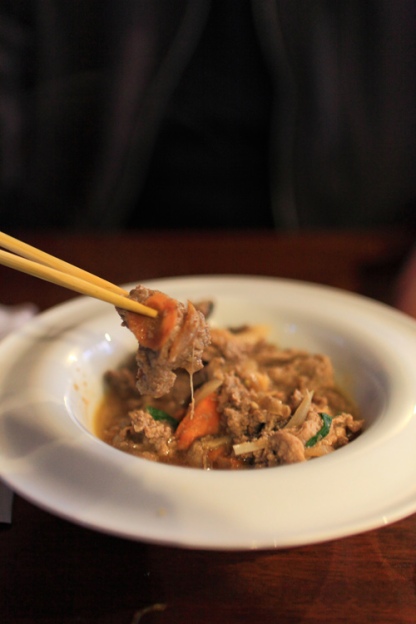 With Pajeon(scallion pancake with calamari) as the last dish, we had to wrap up the cooking and unfortunately I couldn’t cook the dessert, Hoddeok(yeast pancake filled with nuts and brown sugar), for which I made a special dough using pumpkin and buckwheat. So I served the new year soup instead since it was already ready, and finally we were all done.

It was my first cooking in a real commercial kitchen and I was all knackered by the end of the event. Though I wasn’t panicking about the cooking, I was anxious about the fact that I didn’t get to go out into the lounge to talk to the guests as much as I should have, which was by far the biggest mistake. If I ever do another gathering like this, I’ll have to keep this in mind. As the guests started to leave one by one saying how delicious all the dishes were as they were leaving, I could feel the accumulated weight of fatigue coming down on me. I felt proud of myself for having pulled it off but at the same time, I couldn’t shake off the thoughts that I could have managed it better and that it might have ended in a disaster without the help of a few gracious guests. I still have the nagging guilt at the back of my mind for having made them work but the guests were so lovely and understanding, trying to turn the situation into a fun time, which helped me relax despite the pressure to put food on the table as fast as they ate. This experience certainly helped me to broaden my horizons in terms of commercial cooking and also to make new foodie friends.

The highlight of the event was probably the kimbap, which left me with the possibility of organising a separate kimbap workshop another time. I was so happy that among the guests was a close photographer friend of ours, Petek Arıcı, who took all these lovely shots for me. You can check her work here. She’s an inspiring artist. Again, a big shout out to Gökçen Ceylan, who had brought what could have been an ordinary event into the spotlight as well as the chef Erdem and Bahane Lounge for allowing us into the kitchen and helping us. Above all, my biggest thanks and love go to all the guests who came to share the experience and made this event happen, giving another kick start to the new year. 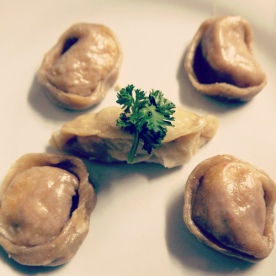 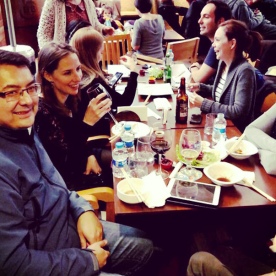 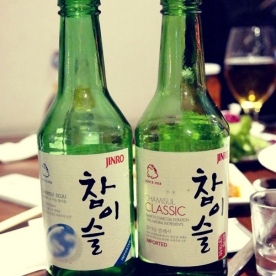 This set of photos were taken by Gökçen and, as you can see in the photo, he is a very warm and likeable person, and he made entertaining commentaries to charm the guests while swerving his wicked camera around in dramatic angles. As it turns out, he is also a photographer himself. One of the guests who had lived in Korea for 4 years brought two bottles of Soju and they seemed to have lots of fun. At the end of the event, we did a lottery to give away six jars of my homemade kimchi, and when I returned to the kitchen, hungry Mr.O, who worked hard cooking dumplings nonstop for 3 hours, was finally smiling while eating the cold leftover japchae.