Ok, I’ve taken the involuntary absence from the blogging sphere as a sort of excuse to stay away from the computer and instead doing some reading to prepare myself for the upcoming wine course. But it’s about time I broke the silence. So here I am, quite puzzled by what is happening here politically and disappointed that I’ve been so complacent about the freedom in social media and the internet law. Yes, I’ve heard and read about it but somehow my little heart always hoped that it wouldn’t affect me and my life. But I’ve been proven wrong, which makes me think how other journalists cope with this unjust law since it concerns their job.

I haven’t been able to access any WordPress blogs, including mine, for a week now. Many posts are waiting in the queue, many guests have come and gone and many foods have been shared. At first, I thought it was a temporary technical glitch but, when I saw a message saying ‘This site has been blocked by the court decision.’, I felt betrayed and cheated as I did when I ate this ‘Duck Fries’; of course, more. Do you know what they are by the way?

This post has been postponed deliberately, because I wasn’t sure whether this would be appropriate for my ‘beautiful’ blog. Nowadays vegetarianism is perceived as a synonym for healthy and fashionable, and it leaves no place for displaying a dish made of a carnivorous ingredient such as this, however natural it might be. You might call me old-fashioned but my opinion is part of my background of living both in the new and old world, and I’ve been thinking a lot about how traditional food culture might have answers to many of the health issues modern people are facing.

I’ve recently been to a place called Closet Circuit. where used items turn into useful objects in the hands of creative individuals, for a small exhibition in the theme of Museum of Garbage. As I’m fanatic about recycling almost everything, I wanted to go check it out and support their work. Garbage and recycling is a big issue here and I constantly think of a way to bring awareness to more people.

In this small space adorned with natural materials, you drink delicious exclusive Petra Coffee, which is supposed to be the best in Istanbul, drink water out of glass jars, and eat frill-free healthy food, vegetarian it seems. Vegetarianism is quite a strange phenomenon as it’s changing the modern winemaking styles. I’ll talk about that another time. They have different events every day, every week, every month, and you need to follow them to be updated with what is happening there as is the case for most young businesses these days. I support young individuals utilising their talents to create something unique and, in the process, finding their true self and grasping social capitalism and sometimes incorporating into art. They are so inviting and anyone who has ideas can join the team as the garbage exhibition was organised by an Austrian traveller student. 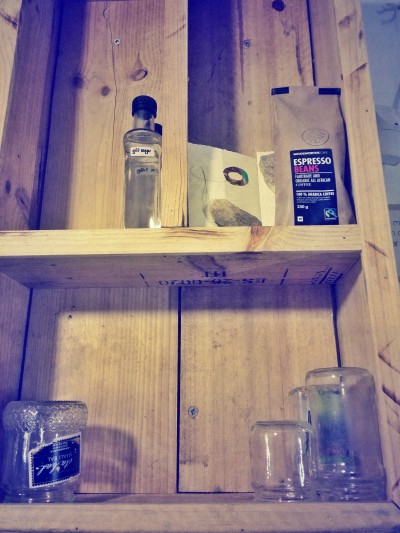 As you know, I’m trying to eat eco-friendly and my way is to ‘not eat processed food and not waste food’. Sorry it’s a stark contrast to the vegetarian dishes served at this cafe but I thought I’d post this dish because I thought the theme is somewhat related. 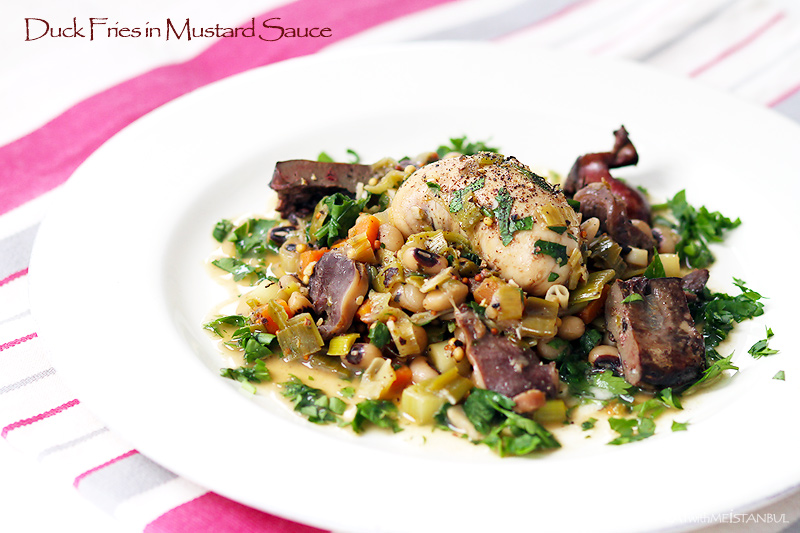 I had cooked this before cooking the whole duck given by the village lady, remember? When I brought this home, I was so surprised by what I had found inside the duck. All the innards were kept intact, heart, liver, gizzard, and…something that looked like kidneys and my knowledge of anatomy could guess just that. Whenever I buy a whole duck, I only find the first three so I had no idea what the last one was. Since the lady carefully trimmed and kept it for me, I assumed it was edible and I fried all in a pan as usual.

I carefully sliced one of the kidneys, which then look so much like white sausages, and I couldn’t believe what I was tasting. It was completely new to me, so I didn’t know what to make of it. I ate believing that they were kidneys as said on the internet, but the texture and flavour made me think I was eating scallops, so creamy and delicate.

It was so tasty that I decided to make a dish out of them and quickly threw what I had at that time into a pan and create something that I thought would compliment the weird delicate thing. It was leek and mustard sauce and was stretched out with the improvised black-eyed peas. I couldn’t have eaten them both but I thought of Mr.O and save one for him. When he came home and ate it, he was also very surprised by the flavour and enjoyed it wholeheartedly.

The funniest story came the next day when I found out what they really were through more thorough search. They were not duck kidneys at all. They were in fact duck testicles!! I was shocked but Mr.O was traumatised and refused to believe it, sending me ‘NO NO NO! You’re lying to me!’ on Whatsapp. No wonder why people call these by the nickname. Where are these delicacies end up if not at our table? But this photo tells that they are consumed somewhere in the world. If I’d known what they really were, would I have eaten them? Well, new world me would have said NO but after eating all sorts of things around Europe, I’m more open to trying anything, especially things ancient and traditional.

If I get hold of it again, I think I’ll blend it into a creamy sauce for a steak or something. I don’t know when I’ll be eating it again. It was a pretty interesting gastronomic discovery and according to my findings, they are called ‘mountain oysters’ and eaten in Balkan countries and served in gastronomic restaurants.

Sorry for this hasty post but I thought I’d get this out of the draft as the new season is coming!