Knock, knock… are you still there? It’s been a long break once again. My apologies… You can guess why I’ve been away, right? I got married and left for honeymoon without the ‘honey’. I spent 5 weeks in London for a wine course! Am I crazy? Yes, maybe I am. You need to be crazy in order to follow your heart and dreams, not money and fame. It’s challenging but more rewarding, no doubt. So I left the unpacking the boxes to Mr.O, the now-hubby, after moving to our new love nest, and off I went. I’ll share my experiences and discoveries in London soon.

When I came back, I had loads of work to catch up on including the book. In addition, I had to organise the wedding – yes, I got married in May but the actual wedding ceremony was held last week – and also had to spend time with my family, who came earlier to travel around Turkey before the wedding.

When my publisher sent me a photo of the book cover with my name written on it, I felt weird… such a strange feeling that couldn’t be described in words. When my family brought my books and I held them in my hands, it felt even more strange and exciting all at the same time. Is this how every author feels? Every time I see my books on the bookshelf, I feel proud but also can’t shake off the thought that I could have written it better.

When I caught my mum reading my book with reading glasses, I wondered what she was thinking as my book revealed some untold thoughts and stories of my childhood and my life in Korea. I deeply thank my publisher for having encouraged me to write despite my poor Korean, which had improved significantly over the process. What I tried to tell people through my book isn’t about how amazing Turkish food is. It’s more about how to appreciate it properly, why it’s how it is and how I hate the worldwide perception that kebab represents Turkey. Do you know how many tourists are disappointed with kebabs in Turkey? And do you know why?

It’s a personal essay on the cultural observation of an Asian woman living in Turkey, whose heart is in the west, as in Orhan Pamuk’s ‘My name is red’. Many travel books and sites on Turkey written through the eyes of westerners have not been very helpful, in my opinion, especially when concerning food as their palate and expectations are different to Asians, especially Koreans, Chinese and Japanese. Korean tourists do struggle with food in Turkey and I advise them what to eat and how to eat it. Also, Korean and Turkish culture have many things in common, being brother countries, so my experiences are somewhat unique and can be debatable.

So when the opportunity of writing a book came along, I decided to share my interpretation of Turkish culture and cuisine as a food and wine enthusiast, not a tourist. I hope my book will help to understand the ethnically, religiously, and politically complicated and diverse Turkish culture through food. I’m sorry it’s in Korean but hopefully the next one will be in English, and even better if it’s a 100% cookbook! 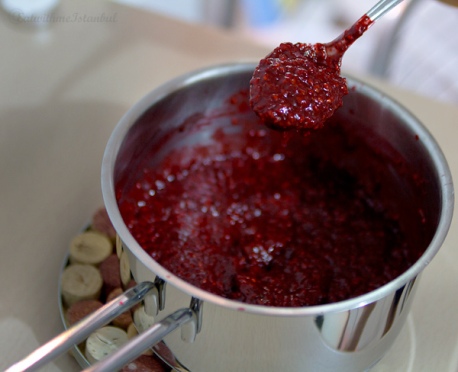 A few days before my family had arrived, Mr.O’s parents gave me a big tub of frozen raspberries, which were from the garden of Mr.O’s sister’s friend’s. I made most into jam and put aside some for a cake I was planning to make for my lovely twin nephews. When I was preparing, my sister suggested I let her kids make it as baking was part of their school vacation homework. I’d always wanted to have photos of me cooking with kids so I happily agreed. So finally, yeah!

I was thinking that the cake was going to turn out well, but it did! They knew how to fold cake batter as they practice cooking and baking at school. It was a bit chaos allowing them to take turns and taking photos at the same time. 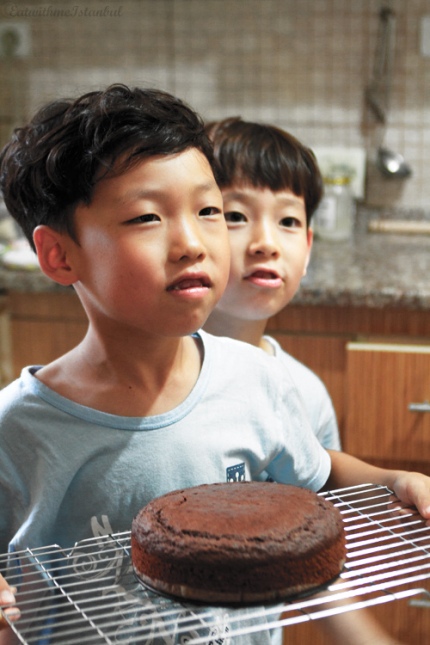 They are such cuties! I wish they were my own kids. I kept convincing Jin(the second one by 1 min) to come and live in Turkey since he likes bread and cheese more than rice. Sung can’t survive without rice and kimchi, and doesn’t eat sweets. They are twin but not identical as you can see. They did a Takwondo dance performance at my wedding, which really impressed and charmed the guests.

I’ll share the stories and photos of my wedding, which I consider a huge success. Takwondo, Gangnam Style, the davul(Turkish drum), on which I danced! I even managed to do the wedding photo shoot at the temple of Athena in Assos, which had been my another wish beside a vineyard wedding. I didn’t expect the wedding was going to be that fun and crazy but wow, I hadn’t known the Çanakkale style until then.

This chocolate cake was made with coconut oil and olive oil instead of butter, just for my curiosity and a way of localising recipes. You know that I’ve been replacing milk with yogurt since I moved here but I would never give up butter for anything. But I can take in the notion that cakes and cookies can be baked with olive oil and can be as nice.

I browsed on the internet and found some successful looking cakes made with oil such as in The Spiced Life, Baker by Nature and My Name is Yeh. Some claim that using plant oils yields more moist cake and my experiment has proven that it’s true. It works because the main ingredients have strong flavours to mask the oil flavour. I wouldn’t use oil, especially olive oil for more delicately flavoured cake. In this recipe, I used half coconut oil and half olive oil but I’ll make it with full olive oil next time.

I let the kids serve the cake and the greedy Jin cut a big piece for himself and ate it all. Even Sung, who doesn’t like cake, polished his plate. What a lovely afternoon it was, with the four o’clock flowers, whose Turkish name is akşam sefası meaning ‘evening pleasure’, in full bloom in the background! Now the house seems so empty and quiet without the extra 6 people. I already miss the giggles and smiles of the kids.