**The short film in which I made an appearance, “Romance and Spirit of Sicily” has won awards at several international film festivals. I hope you you’ll enjoy it!**

Hello! I’m finally back! Please forgive me for the long absence. For a girl, who had wandered around the world for over 10 years, to finally become Mrs. was a good enough excuse to have a break, I thought. To justify the long break, I had planned to make a grand comeback with a new website but well, this is as much as I could do.

But I have many exciting stories to share with you in months to come, and I’ll start with the latest culinary trip to Sicily, the mysterious island that everyone desires.

Yes, it was full of wonders and beauty, and didn’t disappoint me in any sense. The people were so generous and friendly, and it was so good to be in a timeless place where everyone says hi to everyone. After a week, I felt like I’d lived there for a year!

Cefalu, where Cinema Pasadiso was filmed, was the base for the trip. I was invited by Julian McDonnell, an award winning film maker from Joolzy Productions for his film project, and since I’d been enjoying his entertaining Joolz Guides on London,  I was delighted at the opportunity to participate and experience wonderful foods Sicily has to offer.

My role was to sniff for good places to eat and taste all the foods. What a fantastic job?! He might have thought that he needed some help because his palate isn’t as adventurous and polished as his film skills.

First thing is first, and as soon as I arrived to join the crew, we all headed for a nearby winery, Abbazia Santa Anastasia. There was a rumour prior to the trip that we might get involved in picking the grapes since the trip was in mid-September, which is the harvest time in Sicily.

Unfortunately we missed it by a few days! However, we still got a special treat, which was as exciting for an oenophile. We observed the ‘pump-over’, climbing on to the top of the concrete fermentation tank, drank the grape juice in the process of becoming ‘wine’. Have you ever tasted fermenting juice? It’s yummy! Like Ribena mixed with grape juice? Cin cin~!

The inside was full of aromas of fermenting grape juice and in one corner in front of a stainless tank, white wine was fermenting vigorously making a very loud bubbly sound. I wish I could share the sound I’d recorded. We moved on to the barrel tasting of Chardonnay as the winemaker was doing the ‘battonage‘, stirring the lees. FIY, this winery practices organic and bio-dynamic wine making, no added yeast or fining agents, and produces over 15 wines using both natives and international grapes. 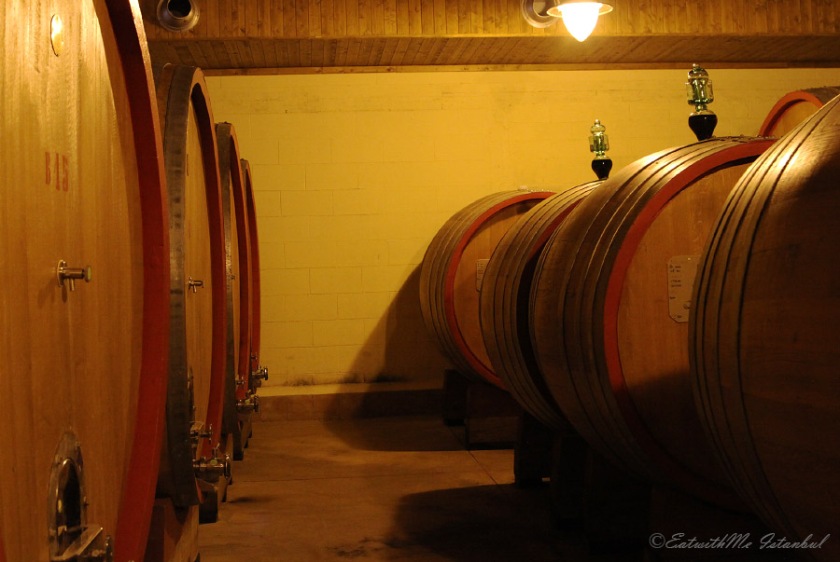 Wine is fermented in glass-lined cement and stainless tanks, French barrique and traditional large botti, a large wooden cask as in the photo, some of which contain 1500 ml. The double-chambered glass device at the top of the barrel is to top off the barrel without letting oxygen in. 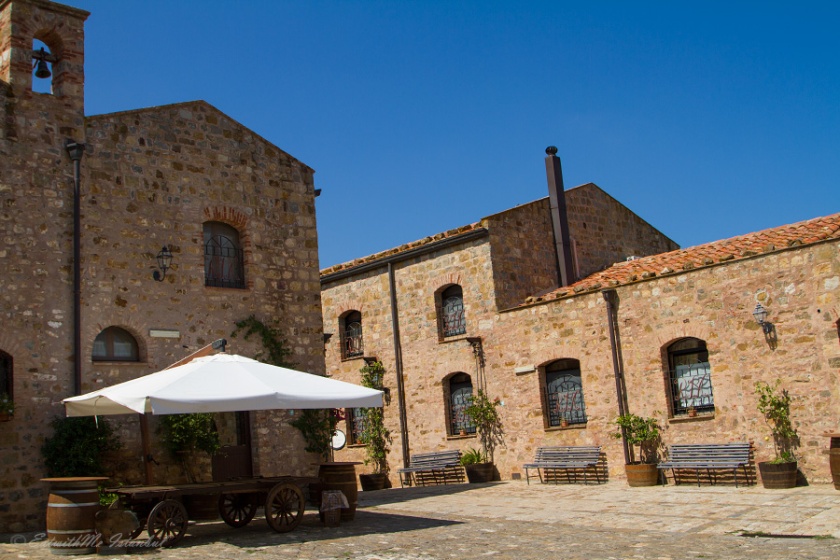 Now it’s time for a real wine tasting! By the way, this winery was a 12th century Abbey where monks were making wine and was bought and converted in 1970s.

The view across groves of trees and hills to the ocean was amazing and romantic. Because we turned up unannounced, the manager had to rush setting up a big table for five of us outside. While waiting, we nibbled on bread and olive oil, which is also produced by the estate. 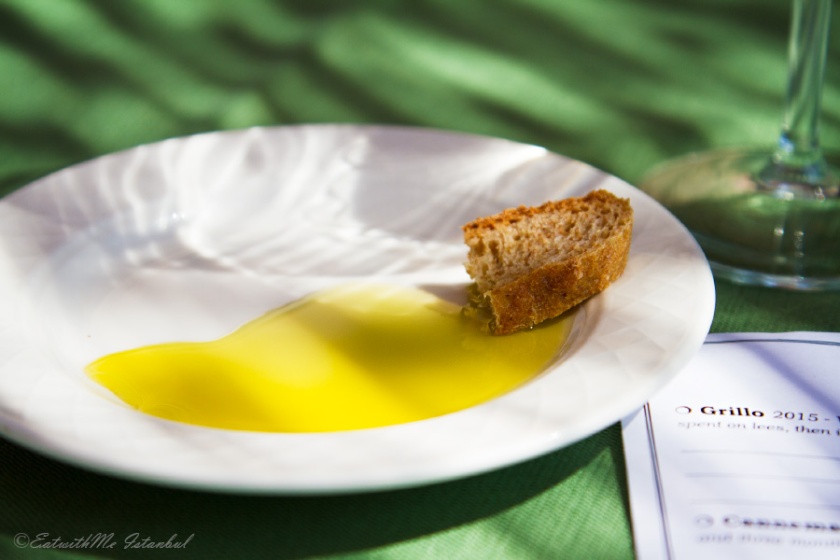 We were given a tasting sheet and I’m writing looking at the snap shot of the notes I took and it says ‘pale yellow, citrus, white peach, floral(jasmine?), light and refreshing, long finish‘ It spent 1 month on the lees and it didn’t have the obvious yeasty and nutty flavour like many other Grillo I’d tasted in Sicily. 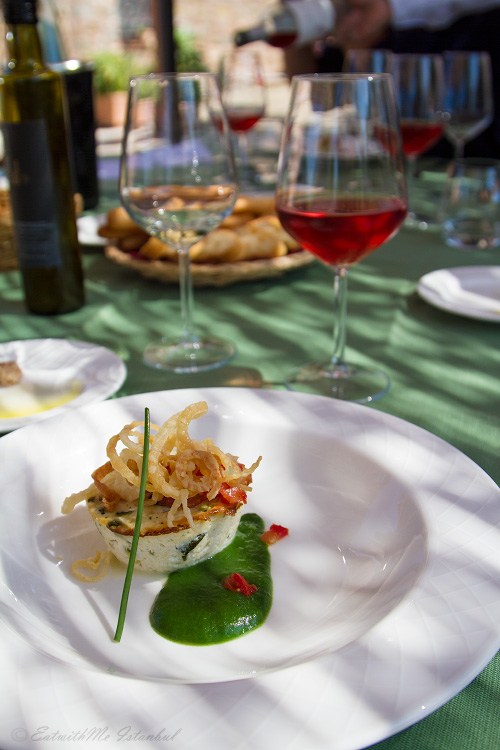 What a treat it was! After being pampered with lunch, we drove for Castelbunono, making a brief stop at the vineyard to look at the vines. There were some bunches drying on the vine and I picked some off for a taste. 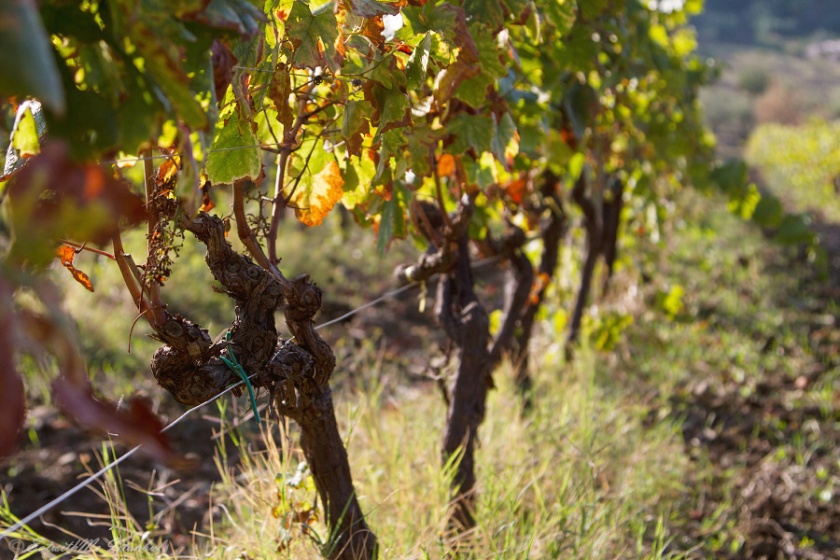 We survived the drive on the winding mountain road with a full stomach and were welcomed by this historical, charming medieval town where cute rascal Toto went to school. As it’s high up in the mountain, the air was really crisp, for which it was originally named ‘Castle of good air’. But the current name means ‘Good castle’, which you can see and more history on this blog.

The moment we arrived in the square, Angelo and Marco, our local experts stopped us at Fiasconaro shop and made us taste local specialities, mainly sweets, including panettone, marzipan, gelato, pistachio cream and Nutella-like spread with sugar crystals, and manna.

Yes, manna, the sweet sap of ash trees, was the strangest thing I’d eaten up to that day. I’m familiar with mastic and maple syrup but oh, the manna, I don’t know what to make of it but I can only see why it was called ‘manna from heaven’ or ‘a gift of heaven’ and such. Curious? You can read more about it here.

Yes, Sicilians, too, love pistachio and gosh, we ate so much sweets in one go for the sake of filming. Because we were preoccupied with filming, I forgot to buy the panettone and speciality salami, which I regretted a lot later!

When we finished visiting the castle, the sun was setting and the air was getting quite cool and we headed back to Cefalu reflecting on the delicious day we had. It was only the beginning…

Stay tuned for more stories on Palermo, Sicilian cooking with a chef, and the wines I drank and the foods I ate.