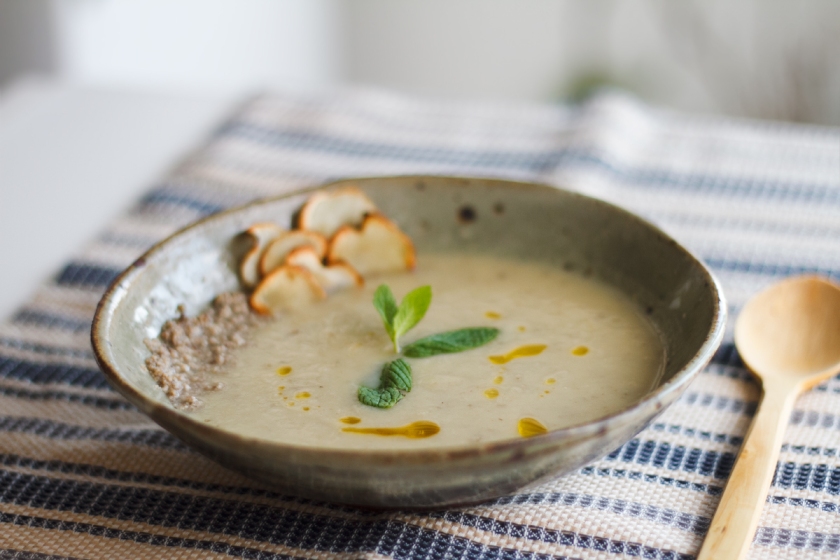 It’s been absolutely cold and snowy for a few days now. I haven’t felt this cold for years! Blocked roads, suspended transportation, closed schools(yipee!), snow storms are wreaking havoc in many parts of the country. Even my new city has seen snow of this level for the first time. The only thing anyone wants to do is to snuggle up inside the house, cuddling a hot cup of tea or sipping wine, listening to the hissing sound of wind and watching the snow dancing wildly. However, even in such a cold weather, one can’t avoid the dog routine and I try to keep it as short as possible. BUT Dusha was running around, oblivious to me getting frozen. Why do dogs love snow so much?

“Are you thinking what I’m thinking?” 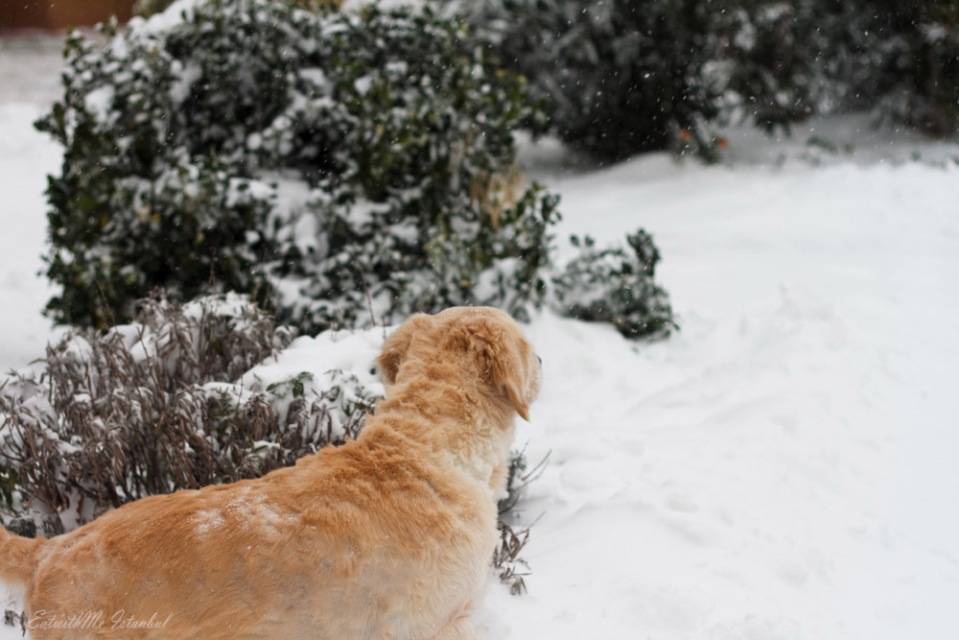 She digs it up, rolls in it, and runs so wild that she didn’t seem like the same dog. She disappeared out of my sight a few times and came back running, all exhilarated. I would have made a snow man or taken a walk if it hadn’t been for the wind! Canakkale is notorious for wind, which is good for the vines but not good for me!

There are some vegetables that become more delicious after snow and spinach is the best example, followed by parsnip, leek and Jerusalem artichokes(sunchokes), which improve their taste, nutrition and digestibility (‘fartichoke’ ahem..) I’ve heard that it’s ideal to eat inulin-rich foods with calcium-rich foods or probiotic foods, hence tahini and yogurt? 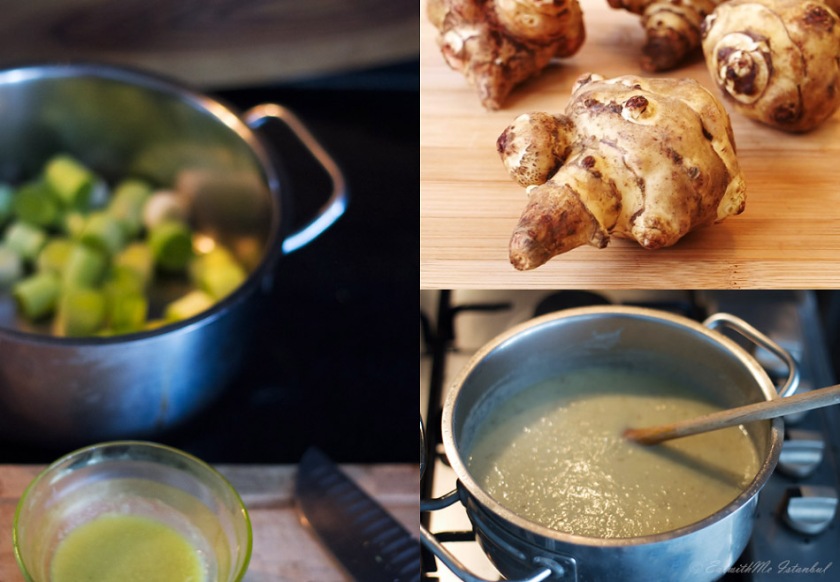 When I made this sunchoke soup last month, I added wild perilla seeds powder just to try and Mr.O liked it so much that he put 1 TBSP of it instead of teaspoon and ate TWO bowls! Then I thought, well,  the earthy, nutty, creamy sunchokes aren’t far off from nutty and creamy perilla seeds.

I used the dripping I saved from the roasted turkey, which had flavours of herbs and others, to sautee the leek so I just added water instead of stock.

In case you’ve never heard of perilla seeds before. they are often confused with sesame because it’s called ‘wild sesame’ in Korean. I remember FIL was getting frustrated with the translation saying that sesame leaves aren’t as big as the ones he often saw at restaurants in Korea. Perilla seeds, called ‘shiso’ in Japanese, are regarded as superfood (sorry, I’m reluctant to use it but it’s such a trend-setting word!), so rich in two essential fatty acids, omega-3 and omega-6, calcium, antioxidant, and much more that it makes chia seeds seem puny. I can never understand the rage over chia seeds.

Whatever health benefit perilla seeds have, the most important thing is the taste, which is so good that it makes lovely flavours to bland vegetable dishes or enhances meat dishes, besides all the health benefits. It’s THE secret of Korean temple foods, too. Intrigued? Why not rush to the closest Korean grocery store and get a bag to try? 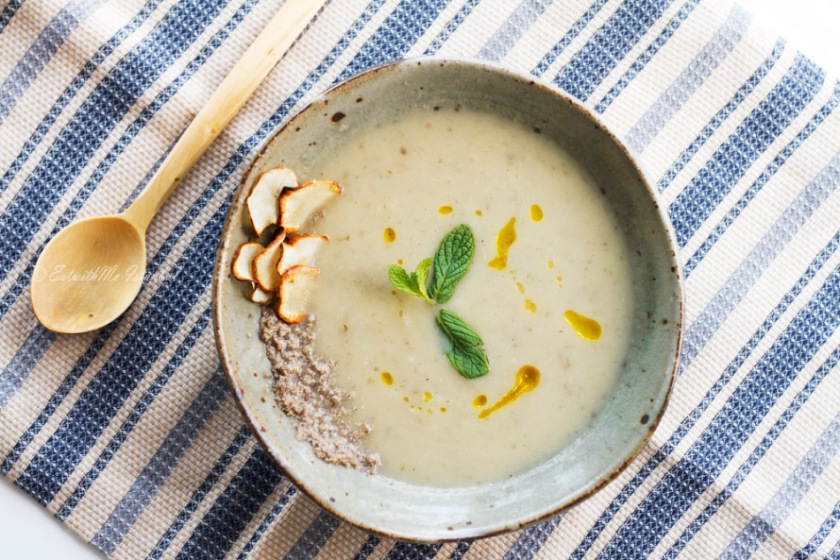 Many people add cream or milk to sunchoke soup and I love it, too, but I had neither, plus this soup is already so creamy on its own that it doesn’t really need anything added. However, just for the pleasure’s sake, I drizzled an extra earthy pleasure, truffle oil, into the soup. Sunchokes are also called ‘Canadian truffle’. So there you go.

The result is one decadent bowl of sweet, nutty, creamy, earthy and healthy humble sunchoke soup and voila! 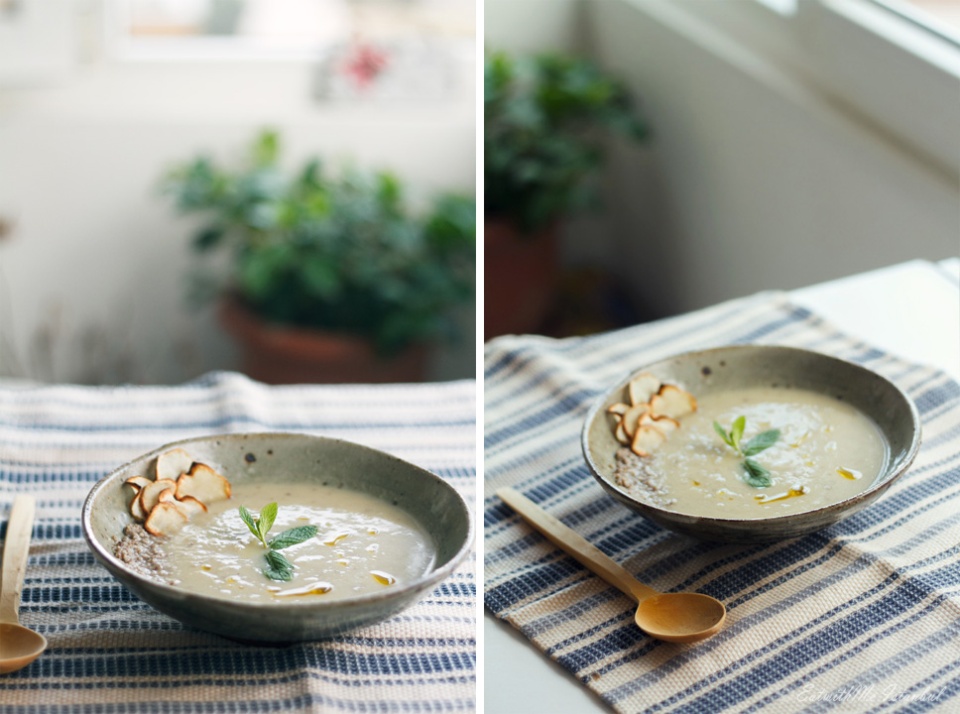 The next question is how can I possibly eat up the whole pot of soup alone?! I miss Mr.O already… I ate it for two days and saved a jar full for another day and packed the rest into a container to take to my in-laws, who have become my new testers!

And guess what? They loved it, even my picky MIL! 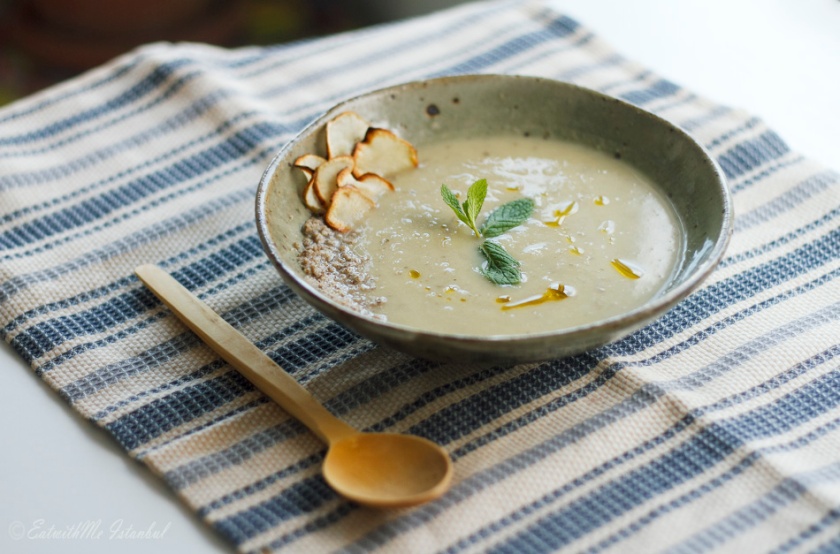 How can you not make crisps when you have Jerusalem artichokes, huh? They’re great snacks but I burnt half the batch while pureeing the soup. BTW, sunchokes are called ‘yer elmasi’, which is the exact translation of ‘earth apple’, which again conjures up the French word for potato, ‘pomme de terre’ or the Dutch word ‘aardappel’. Since I love the history of language and food, I had to look up the history of Jerusalem artichoke, which turned out to be nothing to do with Jerusalem! I read this and this, and I hope you will learn something interesting, too.

Anyway, the one thing that you never do when cooking sunchokes is to peel the skin. Leave it on and move on. Don’t be shocked like my MIL at the idea of not peeling the skin 🙂

1. Sautee the leek and garlic in a large pot with oil until soft and add sunchokes.
2. Pour in stock or water along, add the herbs and boil for 30 mins till the chokes are tender.
3. Using a hand blender, puree the soup until smooth and season it with salt and pepper and add milk if using, and bring it back to simmer for 5-10 mins.
4. Add more liquid(water, stock or milk) if too thick or simmer longer to thicken to the consistency you desire.
4. Add perilla seeds powder or ground nut if using just before serving and drizzle with truffle oil.