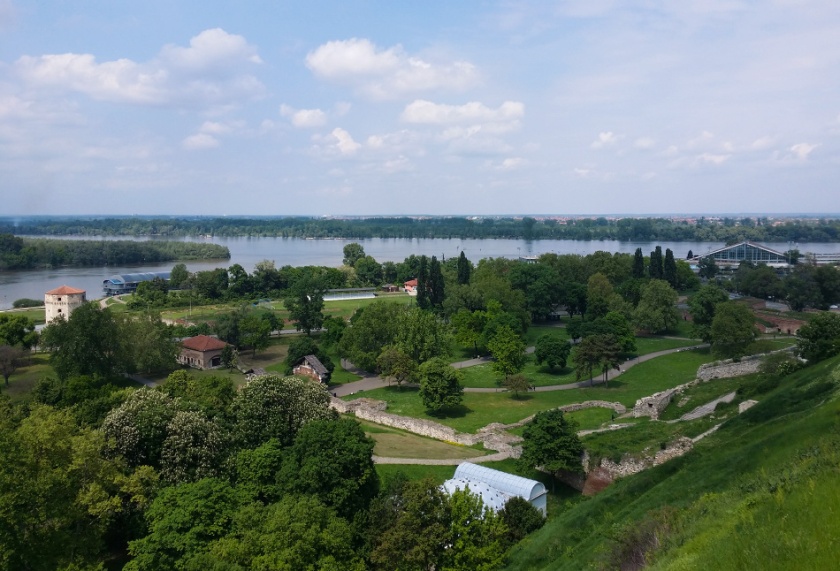 The last two weeks were a little hectic so I couldn’t blog, sorry! First, I’ll fill you in on my foodie trip to Belgrade. The surprise trip helped to refresh my head and relieve my cravings for food and wine.

Let’s be honest, no one would consider Serbia as a foodie destination so my expectation was low, but we had a great time, eating and drinking for 5 days. The city was relaxing yet exciting, and the people welcoming. Everyone we stopped to ask for directions spoke English.

Serbian food was all about meat, yes, but good meat, the juicy smokey meatballs! It itself served the purpose of going there since we’re quite deprived of meat in Turkey, especially pork. It was so ubiquitous that our pork-shy friend was left choiceless sometimes.

We spoiled ourselves with all kinds of meat including venison, believing that not eating vegetables and salads for 5 days wouldn’t do any harm to humans, and it was a holiday after all. In case anything happened, there was Rakija to fix all health related issues so we had nothing to worry.

A glass of Rakija everyday keeps doctors away!

Rakija actually surprised me big time. I thought it’d be similar to Turkish Raki but it was more like Cognac and I, as a person not big on spirits, actually liked it!

It’s served in a special small bottle(čokanji), which looks cool but hard to drink from. The guys always drank a glass before a meal as it was said to be the Serbian way. I also tried a bit of different kinds but plum Rakija seemed to be the best. You should definitely buy a bottle when in Serbia!

Oh, food… the amount of food and wine we drank… this is the first time I gained a bit of tummy on holiday. Do you want to have as much fun as we did? I’ll share the secrets with you!

Here is a list of recommendations and tips from me, who has a global taste and passion for wine.

3 Best & 1 Worst Places for Food and Wine in Belgrade

If you have limited time and have to choose one place to eat, go to Mala Fabrika. It serves Serbian cuisine with a modern twist and we had one of the best meals here. 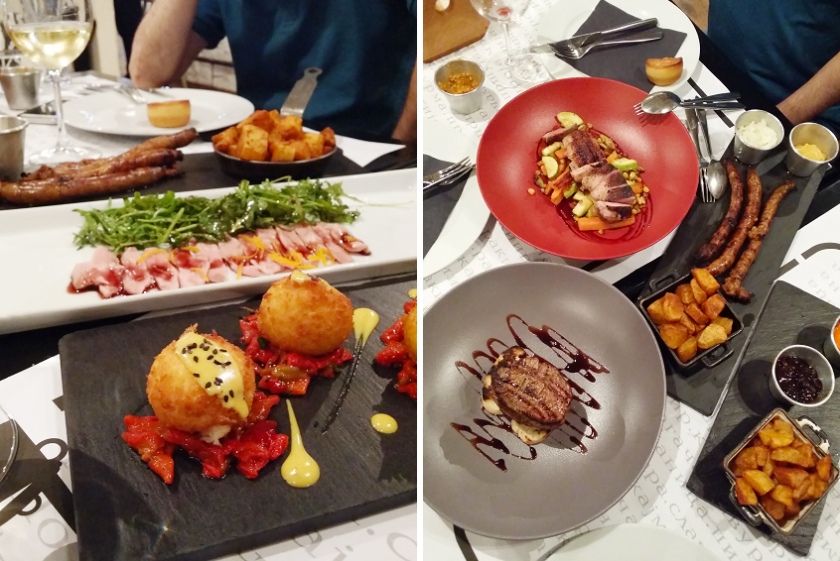 For starters, we had fried cheese balls, duck carpaccio and homemade sausages, which were so divine that we ordered another plate! The sausages were absolutely the best we’d eaten during our stay.

The mains were duck breast and steak with prune sauce, which was succulent and charred to perfection on the outside. Danilo was very professional and knowledgeable about wine. So I had a little chit-chat with him about Serbian wines and he recommended Trijumf Noir, Aleksandrovic 2012. 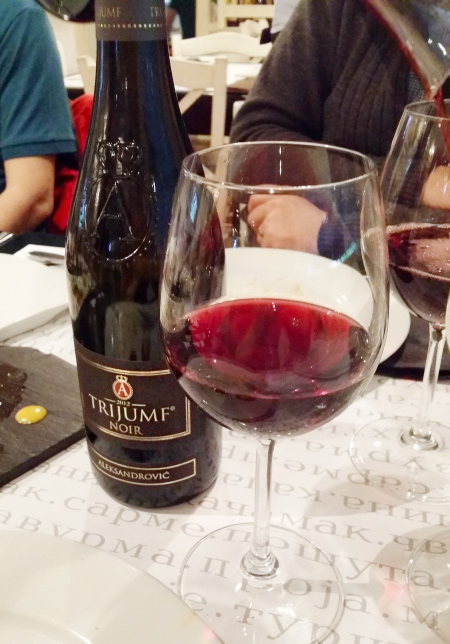 This was my second Serbian Pinot Noir and so far I was very impressed by both. Especially this one displayed a complex aromas of ripe cherry, plum, spice, and a whiff of truffle and balsamic. I learned from drinking various wines on the trip that Serbian wines have unique flavours, which stand out from other countries I know of. I’ll tell you more about it later.

We dined here twice! One by choice, one by accident. Located by the river, it happened to be so accessible. At first, we were a bit worried that it might be a tourist trap but luckily it wasn’t. It’s posh and popular, but I decided to include it, taking its prime location and ambience into account, since the menus are pretty good, especially the wine and Rakija. 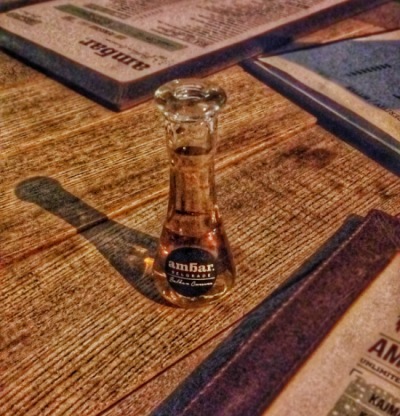 We started with bacon-wrapped prunes with goat cheese and goose liver pate, yum!, and had BBQ spare ribs and beef shank with kaymak (clotted cream). 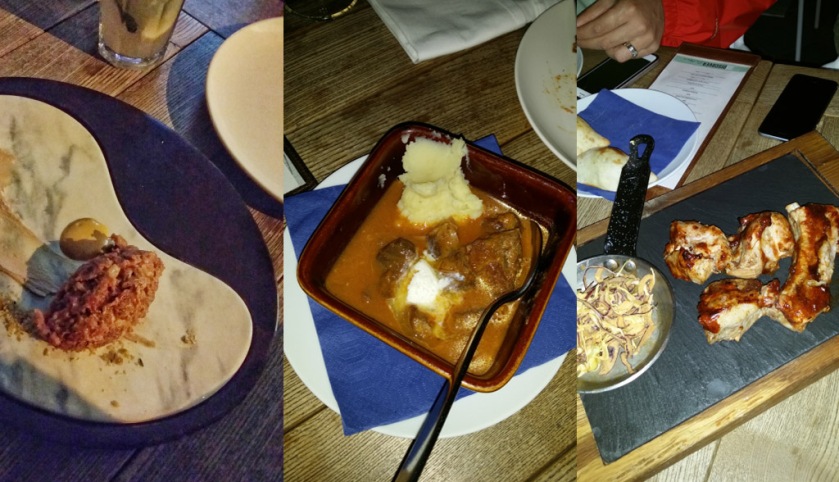 On the bite menu, I saw Kimchi yogurt dip so I took a shot. Kimchi’s fame has reached even the Balkans! 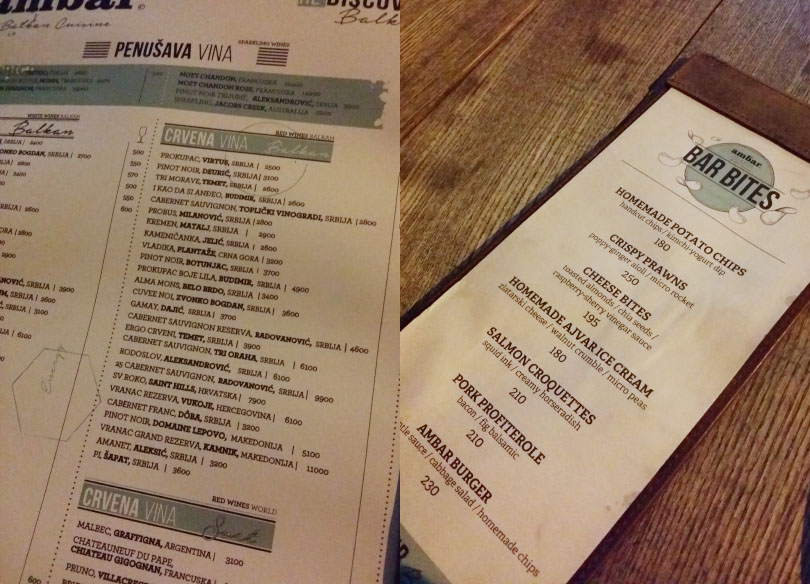 This place has a great wine list so try Botunjac Pinot Noir or Kremen Matalj (Cab S) for a bottle or Tri Morave (Prokupac+M) by glass. The smiley cheerful staff, seeing how picky I was, gave ma a bit of each to try first, which I appreciated. She was really adorable!

The second time we ended up there was when the next door Latin gastrobar, Toro had no table available. Then we realised Toro and Ambar shared the same kitchen, and to be fair, we weren’t there for Latin or Asian fusion anyway. 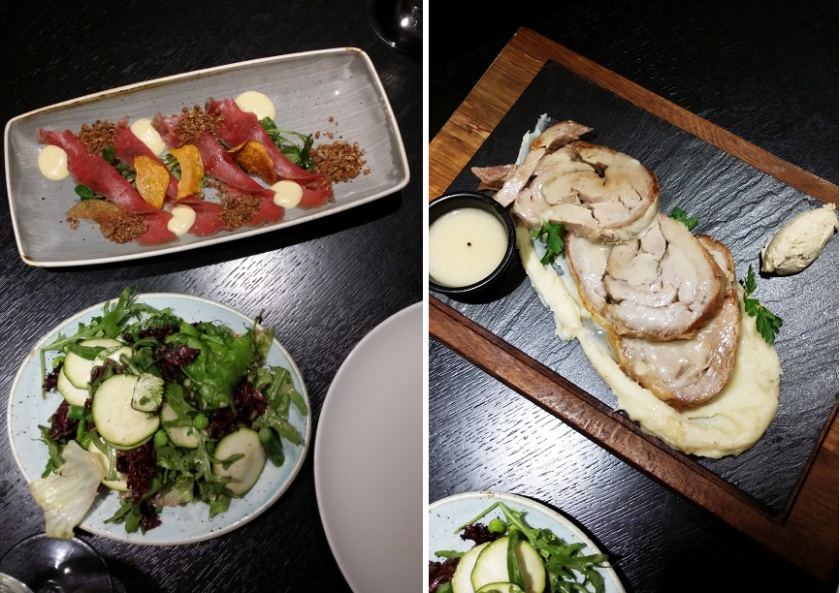 We caught up with hubby’s parents, who were stopping overnight on a Balkan tour. What a coincidence! I ordered several dishes for my pork-shy inlaws. The cheese pie and veal roulade were delicious and so were all other bits and pieces. 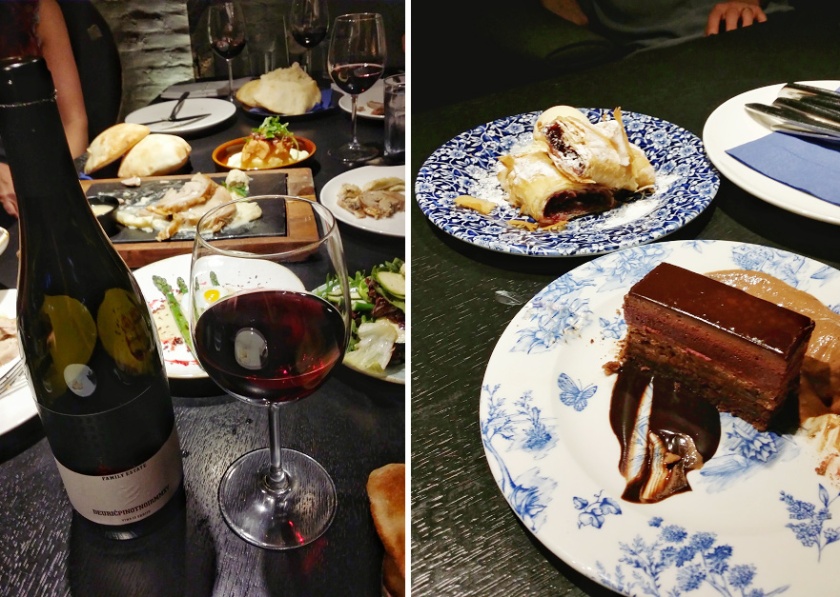 We shared Deuric Pinot Noir, which was light and fruity, to compliment the dishes. We had krempita, cherrry pie, salty chocolate cake, but the desserts were average.

While in Belgrade, I looked for live Gypsy Jazz, which I love, but couldn’t find any even in the famous Bohemian quarter, Skadarlija. We were told that it might be due to the weather, plus, the new law had come in to stop live music by 1 am. 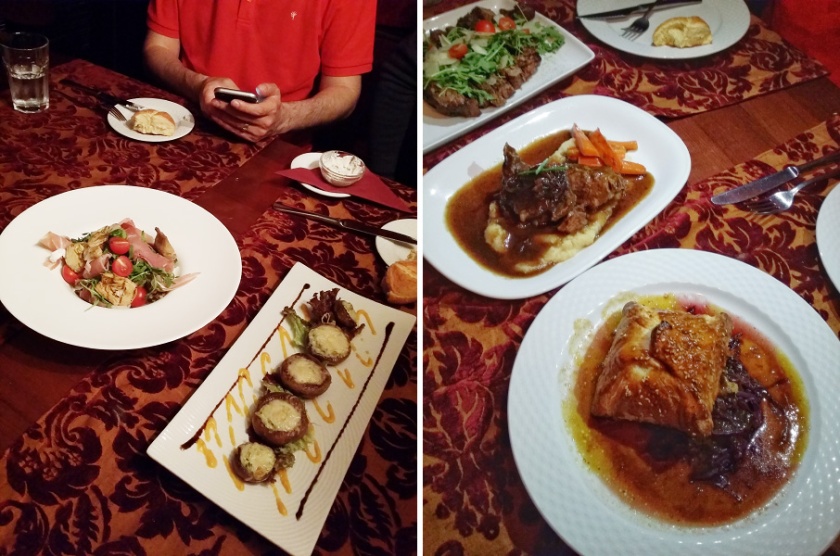 So I chose Little Bay as an alternative and we really enjoyed the evening there with excellent wines, food and live jazz in a fancy and comfortable setting. The duck confit – would I ever have enough of you! – and the beef cheek were wonderful, though the T-bone steak was a bit dry. 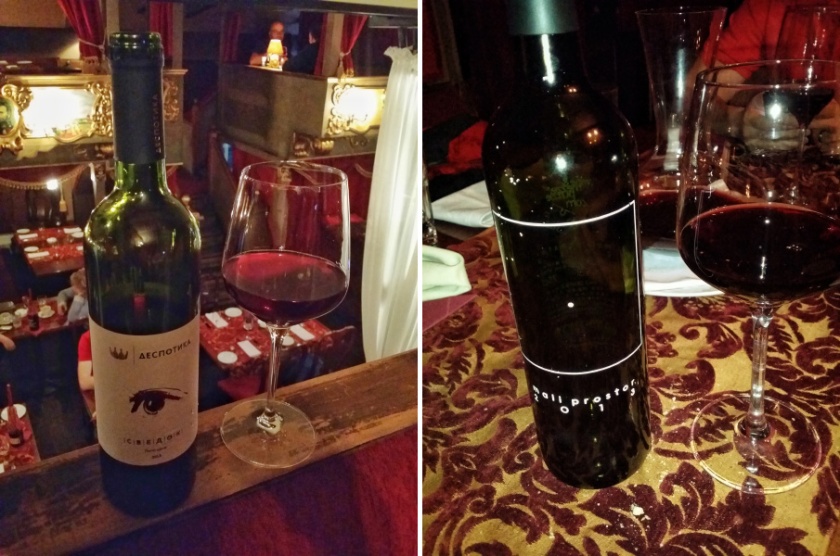 The staff are also extremely professional, pleasant and helpful. The first bottle we had was Vinarijia Despotika, Pinot Noir  2013. I had been really intrigued by Serbian Pinot Noir and wanted to try as many as possible to compare It was very aromatic with red forest fruits, cedar, dried herbs and a subtle orange peel note. It had a long finish with minerality.

The second bottle, Mali Prostor Petit Verdot 2013 was a ‘wow’ wine not only because I didn’t expect to find Petit Verdot in Serbia but also it was delicious, intense with dark fruit, tobacco, smoke, nutmeg, floral, marzipan aromas, etc. I couldn’t find any information about the wine whatsoever on the internet except this.

This was the worst restaurant we’d dined in, which was odd considering the amount of positive reviews. It’s famous as a hunter’s restaurant that serves game meat especially venison. Its food and service can’t justify the price in the name of rusticity and tradition, I’m sorry. We left most of the food untouched except the venison and the salad, which was too salty. 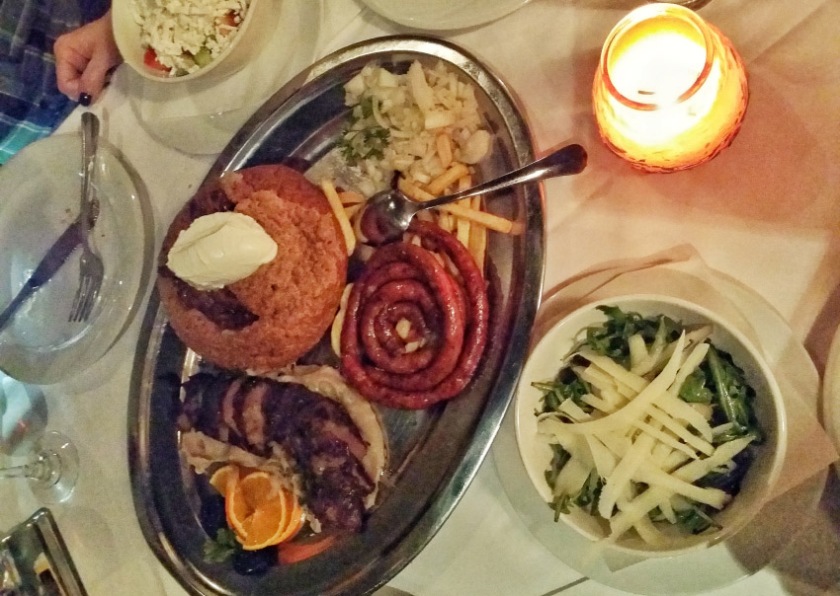 If you really want to eat venison and wild boar, well, I can’t stop you though. But at least you know you’ve been warned. Even the wine list seemed it hadn’t been updated for two decades!

We also ate at Manufakura, which had a nice atmosphere and decent food. 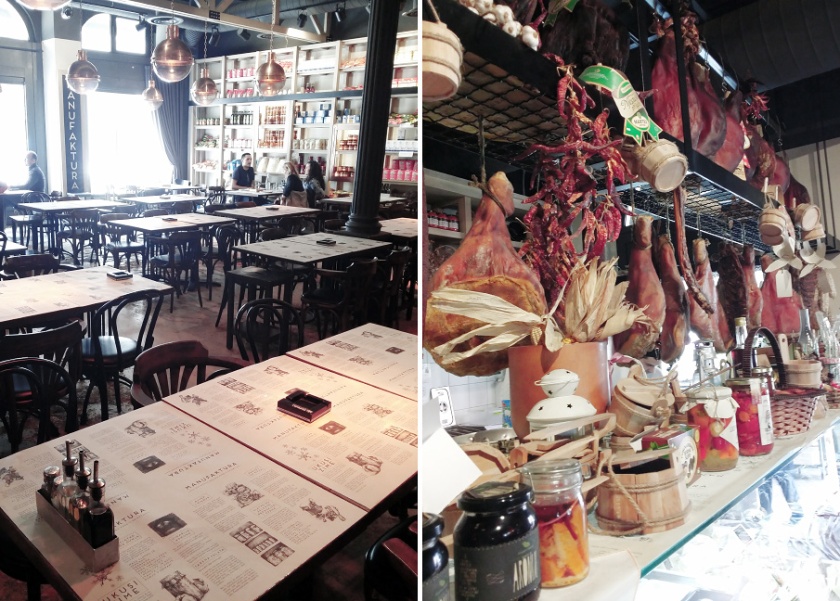 You can try some cured meat and picked pepper stuffed with cheese with some wine and Rakija. We had Toplicki Vinogradi, Pinot Noir, which was good. 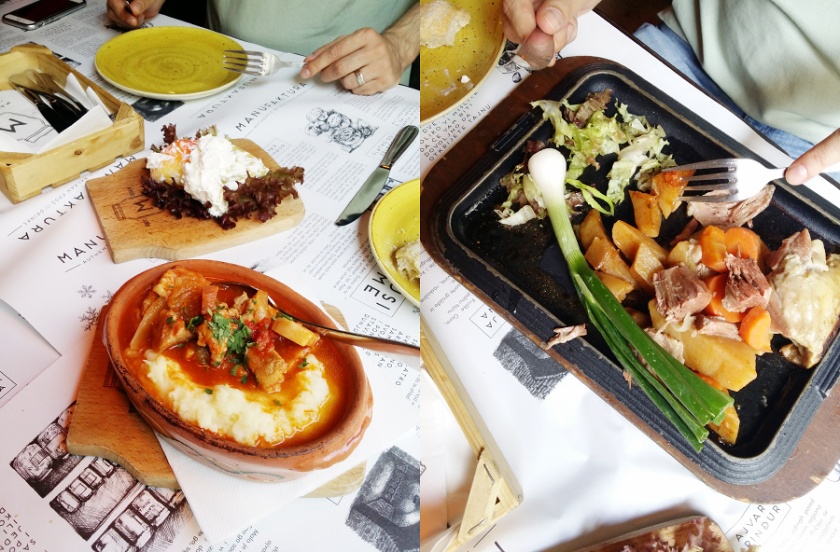 At least, we had to see The Church of Saint Sava, which is the largest Orthodox church in the Balkans. It is visible from everywhere in the city and even from the end of the main boulevard. At first glance, it reminded me of Hagia Sophia on the exterior but it was taller and more stunning. But the inside was still under construction even after 100 years and had nothing to see except the underground crypt with frescoes. 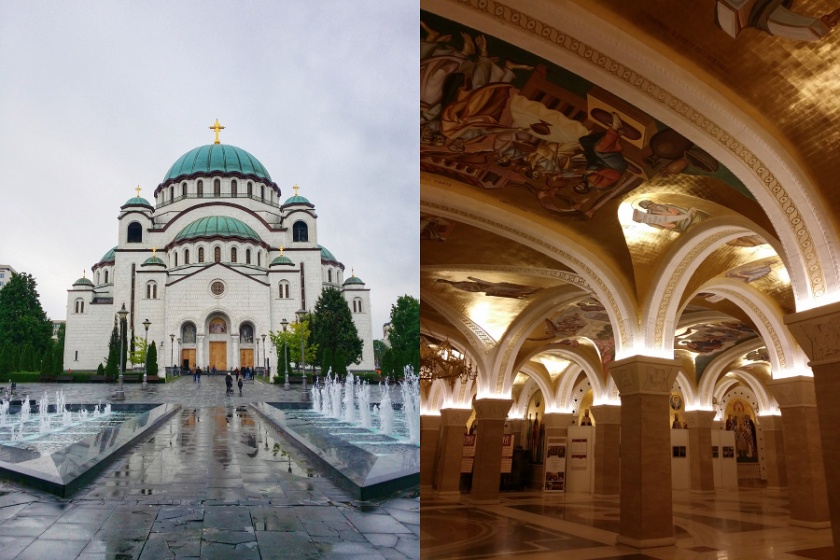 Also, you can try the delicious red pepper borek at Pita Break while walking through Kralja Milana Street and explore some wine bars near Church of Saint Mark.

Other things to do in and around Belgrade

There are a few wineries nearby so if you’re a wine lover, it’s fun to discover Serbian wines. You have two options: north west or south east. Though I would have loved to drive all the way to Negotin near the Romanian border, I had to compromise because the others weren’t into wine.

The winery we visited was Kovačević winery because it was on the way to Novi Sad where Petrovaradin Fortress is located. 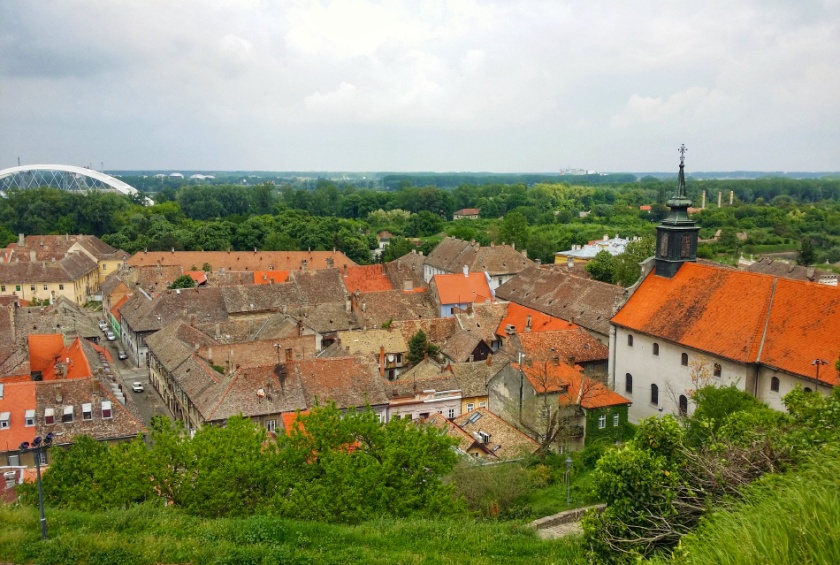 View of the old military barrack from Petrovaradin Fortress

This unexpected fortress holds such significance as a great defence against the Ottomans trying to conquer the eastern Europe and the mysterious underground labyrinth was fascinating. 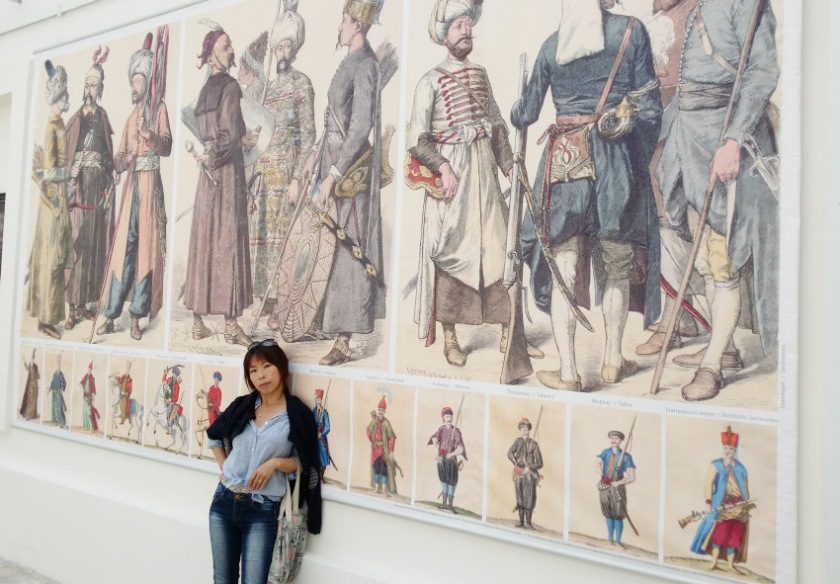 When we were in Novi Sad, there was an international food festival, Food Planet, but what Novi Sad is really famous for is Exit music festival held at the fortress every July. 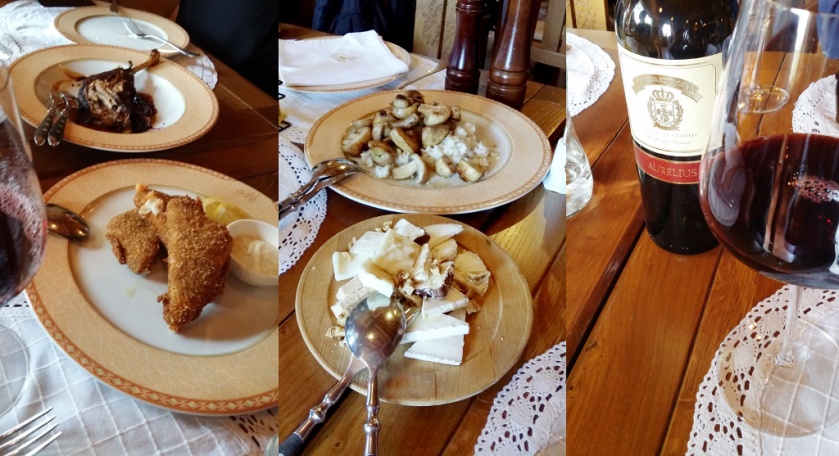 The food we had at the winery was amazing, the best on our trip. Hadn’t I been there, I wouldn’t have discovered the delicious Serbian goat cheese! I bought lots of it at Maxi (gourmet store for cheese and chacuterie lovers) in town, where I spent an hour buying cheese. 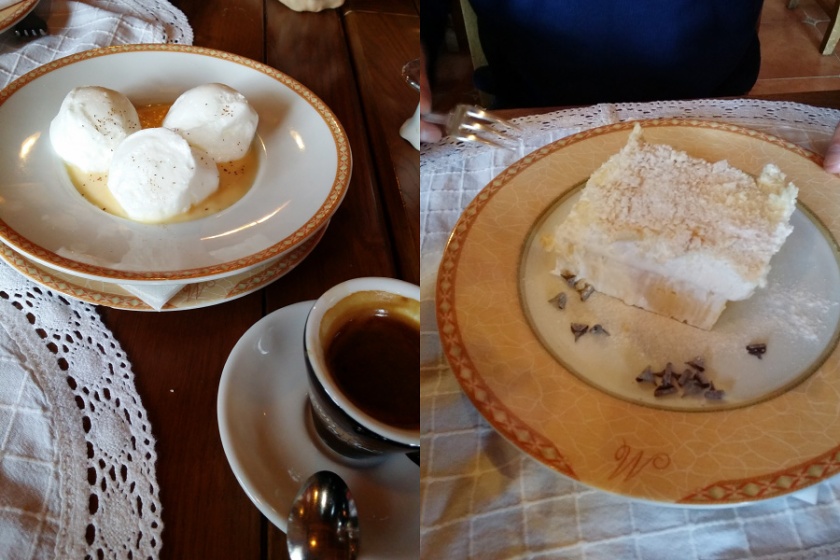 Yes, the floating island isn’t Serbian, and the Krempita (right) was really delicious! Aurelius 2010, a Bordeaux blend, is so well-known that it doesn’t need my comment. It was one of the best wines I’d had in a long time. The whites including Rhine Riesling and Chardonnay were also good.

Alternatively, you can head south to Vinarija Despotika via Vinarija Jeremic and Janko in Smederevo, which I could have done. Well, next time.

Why not go to a kafana and have fun like a local? We were tipped off by an insider that Kafana Ona Moja was great so we went out one night and played as if we were 28, inhaling a lifetime worth of cigarette smoke, which you can’t avoid anywhere in Belgrade. I hope it will change in the near future.

Sitting at the airport, we talked about how much fun we had and why we should make another trip some time. There was, in fact, a lot more than just smoked meat and cevapi, and as a wine lover, I discovered some interesting Balkan wines to add to my knowledge.

I hope to visit Belgrade again and hope that the warm, kind people and their hospitality will stay as it is now.

I’m so happy to be back home with lots of cheese and wine to celebrate Mother’s Day and my birthday.