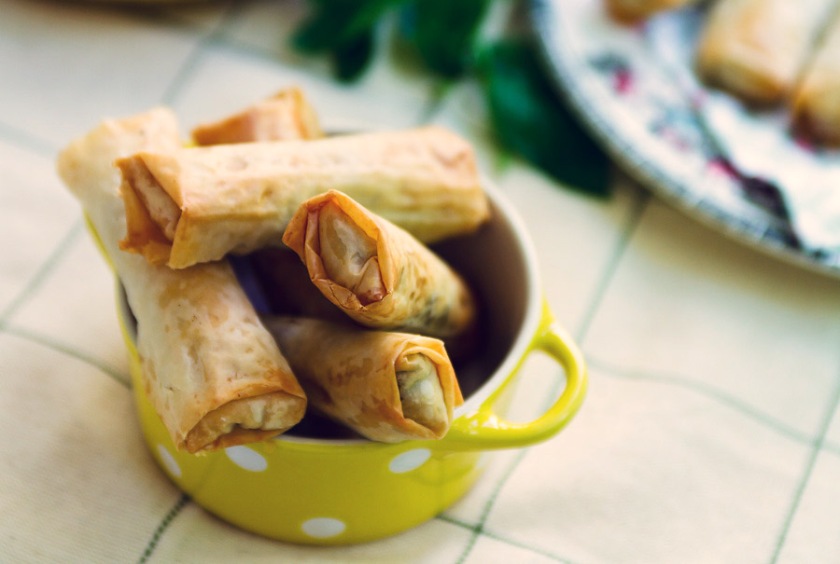 Börek is a big part of Turkish cuisine and there is a börek shop(börekçi) at every corner. It is the cheapest way to fill oneself up but bad for the waistline. “If you don’t like pizza, you’re not human. If you don’t like börek, you’re an alien.” I just made that up. Ah, those good old days when I was eating spring rolls and beer, spring rolls for a starter, spinach ricotta filo for lunch…. now that I’m cutting down on carbs, it’s nothing but an occasional treat. However, it is always a crowd-pleasing finger food at parties but the frying part I’m not so keen on.

Also, the problem is the dough, and my type of börek isn’t easy to find here among a myriad of börek shops as most of it has too much dough than filling. The closest I’ve found is Çengelkoy Börekçisi, which has generous filling and is not too greasy. One evening Mr.O’s parents came to help me put up wallpaper because Mr.O wiggled out of the job again, saying he had a men’s monthly meetup and sending me this photo. But I’m sure it was another excuse not to let me down with his poor handyman skills – first, light bulbs and second, wallpaper.

I served them the börek left over from the day before as a starter. They took a bite and asked me how I made it so light. She said why she doesn’t eat börek, showing me the photos of her friends. Börek and tea, tea and Börek, and repeat it all day. The answer is because I used baklava yufka, known as filo (phyllo) in the west or warqa in North Africa or feuille de brick (brick pastry) in France, and they are baked.

I prefer to use baklava yufka, rather than normal yufka because it’s thinner and flakier when cooked. Also, baklava yufka can be baked easily in the oven instead of the usual method of frying. These cigar börek was my improvisation to use up the baklava yufka left over from our housewarming party the other night.

I made various nibbles and the biggest hit was Chicken Roulade with Purslane, Sun-dried tomato and Ricotta cheese, which was wrapped in filo pastry and baked. Everyone asked about the secret dipping sauce served with the dish. Haha! It’s a shame that I don’t have any photos from that night!!! When you’re IN the moment, you don’t care about taking photos. Well, I’ll have to make it again!

Since I moved to my new neighbourhood, I’ve been going to the Saturday market in Beşiktaş on the European side and the first time I went there, I was delighted to find Balıkesir köy ekmek, which is the sourdough bread my chef friend gets. These days you see a lot of purslane (semizotu) at all markets and some stalls carry garden purslane, which is darker in colour and tangier. 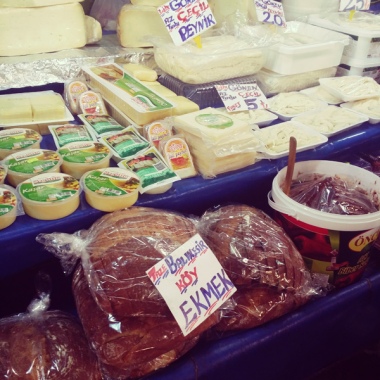 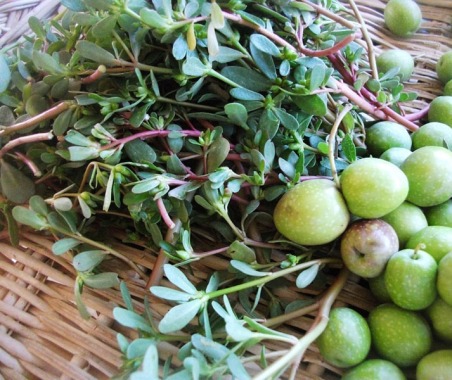 It is usually sold in a big bunch and it doesn’t disappear quickly enough when I only use it for salads. So I sometimes throw it into stew or soup, which I found a great way to eat it. I sometimes throw in not-so-fresh lettuce leaves into stew, too, which is something I learned while living in France. It doesn’t change the taste of the stew and only adds more fibre!

Honestly, I will do anything with purslane except with yogurt, but whenever I buy it, the vendors all say, “Oh, it’s very good with yogurt.”, with five finger tips made into a point facing to the sky. No, thank you. I like it on its own. And you know what, I see more and more restaurants serving purslane salad without yogurt these days.

For this recipe, I blended it all with ricotta cheese – hang on, how is it different to yogurt? It’s NOT sour – with some salt, black pepper and nutmeg. Just to give a variety, I divided it into two and added chopped sun-dried tomato into one, which seems to go better as a stuffing for the chicken. So I had the plain mixture left over and used it to make cigar borek the next day, even two types, savoury and sweet. 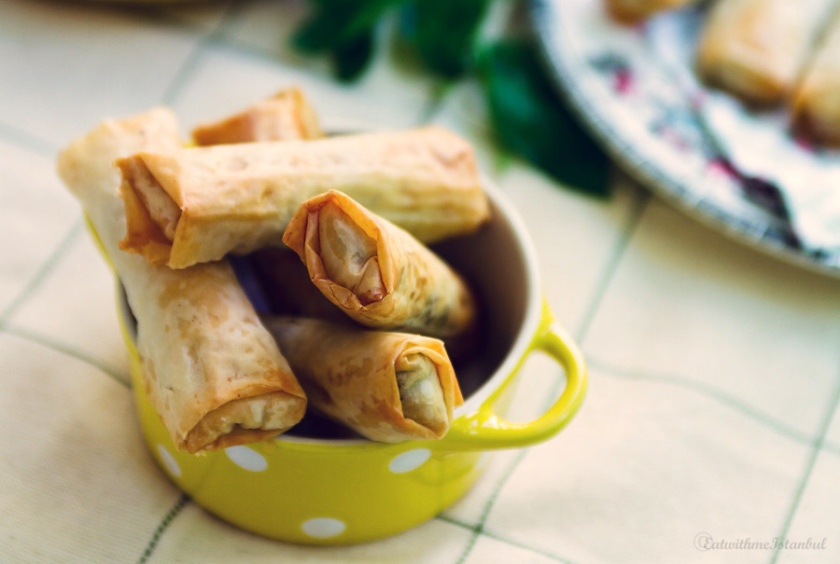 They particularly liked the sweet cigars, which were filled with chopped walnut and almond. I liked them, too, so much that I considered filling my cookie jar with cigars instead of cookies because these are lighter and less work, sort of. I thought about adding glaze or toppings to the sweet ones to tell them apart from the savoury ones but I didn’t. I remember the Moroccan cigars were dipped in syrup or honey but it’s my preference, dry and clean, however, brushing one side lightly with diluted honey can be possible.

For the savoury börek, because of ricotta, you don’t need to add an egg and also, you can use normal yufka or whatever filo type pastry available or you can fry instead of baking if you prefer. The important differentiator here is the filling, Purslane and Ricotta cheese! Some say the envelope method with a triangle shape works better when rolling cigars. Check this blog and click on the link just above the recipe.

1. Blend purslane and ricotta cheese in a food processor and add garlic and the seasonings.
2. Take one baklava sheet and brush with oil and layer another on top and brush with oil, and then cut it in half.
3. Put one tablespoon of filling at the bottom of each sheet, brush the edges with egg wash and fold up the bottom edge and then the sides and roll it up, not too tightly.
4. Brush the cigar with oil and repeat the same with the remaining sheets.
5. Bake them at the oven preheated to 190’C for 15 -20 mins until golden.

NB: You can make two big filo pies if you can’t be bother rolling cigars or make smaller cigars by cutting the layered sheet into four pieces.

1. Mix the nuts, sugar, orange zest, cinnamon and egg yolk until it becomes wet paste.
2. Brush one sheet with butter and layer another on top and cut it in half.
3. Spread one heaped teaspoon of filling along the bottom edge and fold the sides and roll it away. Brush the end with egg white  to seal and repeat with the remaining sheets.
3. Brush the cigars with butter and bake in the oven preheated to 190’C for 15-20 mins.

NB: Make sure you cover the filo sheets and also the rolled cigars with a damp cloth while working.